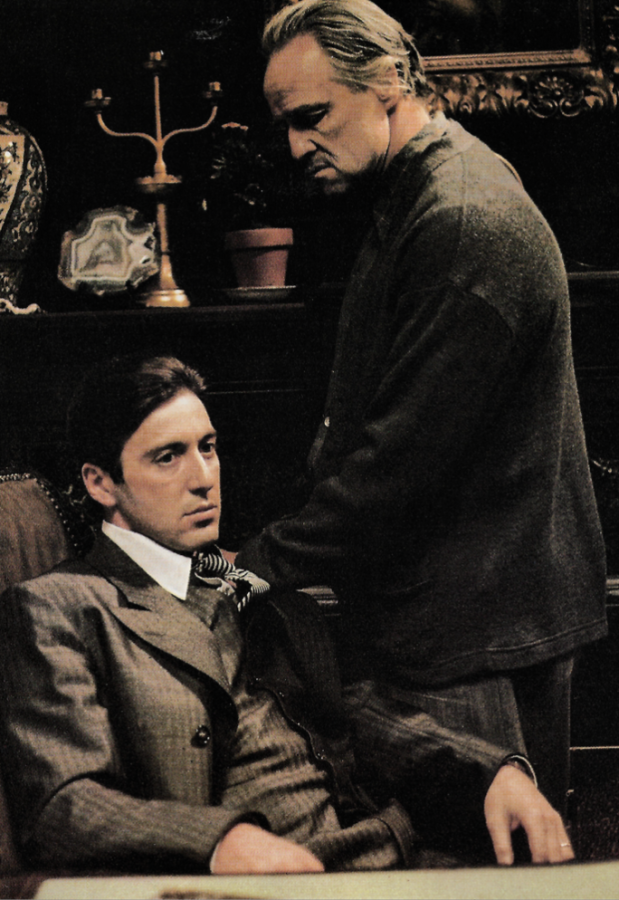 One of the greatest moves in cinematic history – The Godfather – is returning to theaters beginning February 25, 2022, to commemorate its 50th anniversary. As any other fan of the movies directed by Francis Ford Coppola based on Mario Puzo’s novel, I purchased tickets within seconds. Ever since I had first watched the trilogy, I was captivated by Al Pacino’s portrayal of Michael Corleone, son of Vito Corleone – head of the most powerful mafia family in New York. Though the first movie was created in 1972, it remains a cultural phenomenon as people of all ages refer to it as one of the few movies that will live on for decades to come.

The movie theater was packed with an audience, many wearing clothing that pertained to the trilogy. Burbank’s AMC 16 had artwork on the walls leading to the screen room, with the Godfather theme song repeatedly playing, as the audience walked in to take their seats.

Those who headed into the room were able to spot people wearing merchandise with the faces of Al Pacino and Robert De Niro displayed upon them. Senior Rita Akopyan describes the movie-going experiences as, “unbelievably amazing.” “When I rewatched it, I realized I retained a lot of my memory, even though the last time I had watched it was years ago,” said Akopyan. “Being aware of how the director Coppola and Pacino were on the verge of getting fired had me look at many of the scenes differently.” Studio executives for Paramount Pictures were not certain that Pacino would suit the role of Michael, and had second thoughts about Coppola’s capability of directing. The success of the movies proves otherwise.

The experience of rewatching a movie deemed legendary by critics was exhilarating. Audience members would burst out laughing when famous lines such as “Leave the gun, take the cannoli,” were said. More well-known, iconic phrases such as, “I’m gonna make him an offer he can’t refuse,” had viewers on the edge of their seats. It seemed as if the audience had every line in the movie engraved in their minds, as they were able to state the lines of the actors before they, themselves, said them.

Watching the first film for the second time made me focus more on Michael’s transition from not wanting to be part of the family business to becoming the Don. The most heart-warming scenes were the ones Michael shared with Apollonia when he went to Sicily to seek refuge. The few seconds where Michael’s humanity shines through are the ones that are unforgettable, as it portrays that one’s humanity doesn’t depart from them, regardless of how damaged and broken they are.