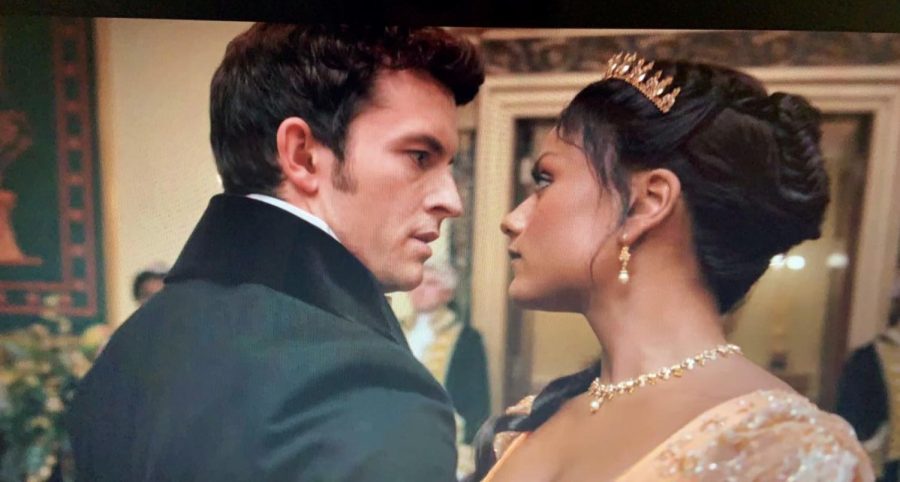 Anthony and Kate can't seem to keep their eyes off of each other as they share a dance.

As a South Asian girl, watching the lead of Bridgerton’s Season 2 be a beautiful Indian woman made me feel indescribable happiness and awe. Bridgerton did an excellent job in giving South Asians the exemplary representation for which we have been waiting for so long.

Kathani (Kate) Sharma was Anthony Bridgerton’s love interest this season, and this relationship was the definition of slow-burn and enemies-to-lovers. Viscount Anthony Bridgerton is looking for a bride, after being labeled a ‘rake’ in Season 1.  Anthony seeks a practical marriage and not a love match, so he “interviews” the ladies of London looking for the perfect bride. Edwina Sharma is the “diamond of the season”, also known as the perfect bride Anthony is looking for. There is just one catch—his eyes can’t seem to stray from Edwina’s elder sister, Kate Sharma. A majority of the season is Kate and Anthony denying their feelings for each other while Anthony courts Kate’s sister, and it is the tension and “forbidden romance” aspect that makes this season so captivating.

Not only was this season’s romance positively addicting, but the incorporated cultural details were impactful as well. Kate and Edwina embrace their Indian culture in the show, calling each other “Didi” (older sister) and “Bon” (sister), drinking chai, oiling their hair, wearing bangles, and displaying beautiful gold jewelry that is significant to South Asian culture. The Sharma women also conduct the Haldi ceremony—an Indian wedding ritual— where they smear turmeric paste on their arms and face.  The fact that the sisters were not singled out or known for their Indian heritage is impactful to say the least, even more so given that Edwina Sharma was named the most desirable lady in London by the Queen of England herself. In the world of Bridgerton, race and color are not defining factors nor are they commented upon. Lords and ladies come from all different ethnicities and share the same respect and status. This dynamic is powerful, as a fictional world has portrayed and achieved what the real world cannot— social harmony.

This season is praiseworthy for its representation of cultures and its masterfulness of the slow burn romance that was so exciting to watch. It was breathtaking to watch the show capture the beauty of South Asian culture and give South Asians a chance to shine on screen. The eight episodes seemed to not be enough, but luckily viewers have the choice of reading the Bridgerton books for even more Kate and Anthony scenes. Though it has not been confirmed which couple will be premiering in the next season, director Shonda Rhimes has already announced a season 3 and 4 for Bridgerton.