New movie ‘Eternals’ does not deserve the criticism 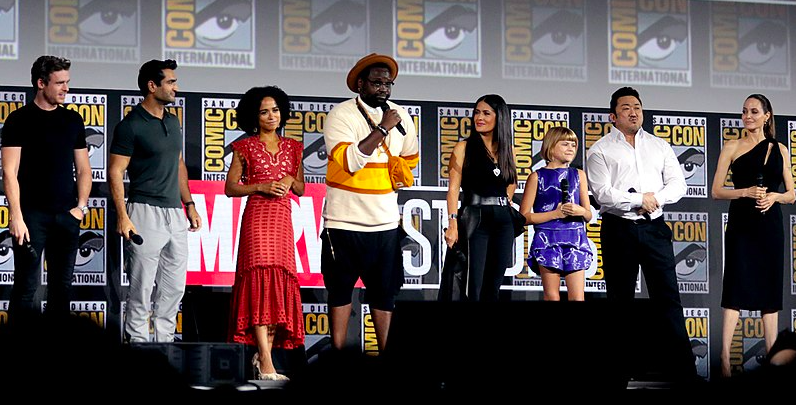 The 'Eternals' cast answer fan questions about the movie at the 2019 San Diego Comic Con.

Marvel’s new superhero movie Eternals made its debut on November 5, 2021. Since then, the movie amassed a popularity rating of 48% on Rotten Tomatoes, 52% on Metacritic, and 6.8/10 on IMDb. Critics on Rotten Tomatoes say the film was “incredibly long,” “clunky and overstuffed,” “low-energy,” and one even said, “it comes with all the childish nonsense over superheroes you get from juvenile comic books”.

Upon watching Eternals in the theaters with my family, I disagreed with what critics had to say. Eternals felt the opposite of what I was reading online; the movie was over way too quickly. There was background and history of the characters that was necessary and left me curious for more scenes, and the storyline felt intense and entertaining. The movie did have a different atmosphere than other Marvel movies— it had less serious topics and more comedic and entertaining scenes with the celestial family. However I enjoyed this difference, and it was refreshing to see the characters’ relationships and love for each other. I felt connected to the characters I saw on screen and was able to relate to much of the characters’ personalities and problems.

Apart from the entertaining and comedic aspects, the film had substantial representation, including deaf and queer characters. This movie has two women of color who take the lead as central protagonists. The whole cast displays diversity and numerous backgrounds: Asian, Latina, Indian, African-American, and Middle Eastern.  Aside from the representation on screen, the movie was genuinely enjoyable and authentic. This film grapples with the concepts of individualism, free will, and has a found family trope that was incredible to watch.

The Eternals movie sets the scene for future MCU productions, especially since the Eternals are connected to Thanos (the main antagonist in the previous two Avengers films), and the ending implies that the Eternals franchise has more coming in the future. This film had more superhuman aspects than viewers may have been used to, but if the Thor movies—where there are Norse gods and a  God of Lightning— were successful. I don’t see why immortal Space Gods are “juvenile” and “clunky” to critics. This movie was publicized as having characters who are immortal with superhuman powers, so the transcendent plot should not have come as a shock. Eternals is a great movie for Marvel-loving families to watch together and immerse themselves in a fictional universe where superheroes save the day.