Winter is Here And so is a New Menu 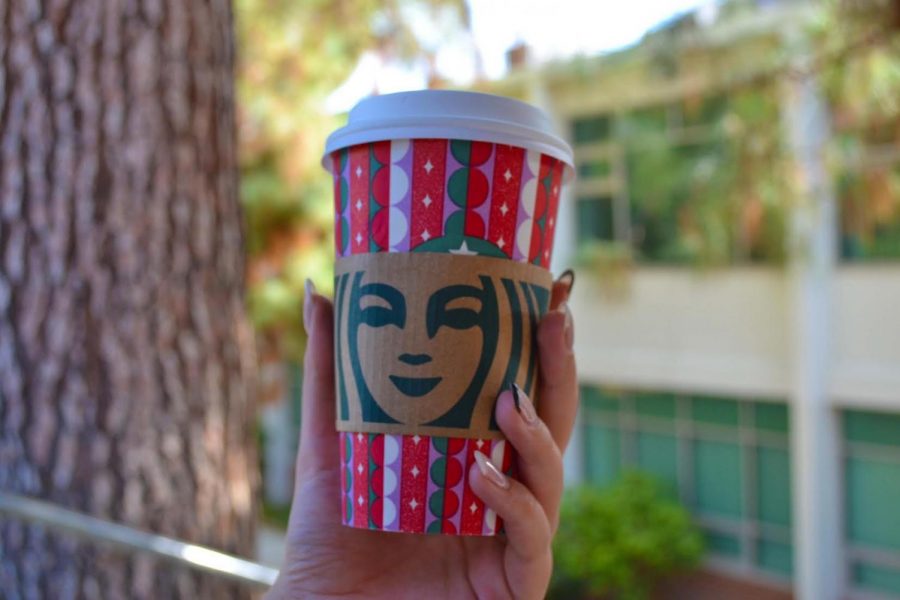 Starbucks releases its 2021 seasonal menu in early November setting the mood for the upcoming holidays.

The colorful red, white, and green striped cups are back and so is the winter menu. Starbucks marks the start of a new season by releasing its seasonal menu. Released on November 4, two new drinks were released this year along with many other seasonal classics. These festive cup designs and flavorful drinks will be available until supplies last.

Opened in 1971, Starbucks has established over 32,938 stores worldwide, creating a large group of loyal customers of all ages. Regulars at Starbuck and other coffee enthusiasts around the country anticipate the annual drink lineup, tracing back to 1997 when Starbucks began the tradition of releasing yearly fall and winter seasonal beverage options.

A holiday classic, the Peppermint Mocha, did not fail to impress. This drink is a classic mocha with peppermint syrup topped with optional whipped cream. With the perfect amount of freshness and coffee, this is a nice light drink to have when you are not looking for something too sweet or caffeinated. “When I think of Christmas I think of this drink,” said Junior Melineh Shahverdyan, a Starbucks regular.

The Caramel Brulèe Latte is perfect for busy days. This drink is a mix of steamed milk, espresso, and Starbucks’ special caramel Brulée sauce finished with whipped cream. “What can I say, it’s my favorite drink…the only one that can give me my caffeine boost,” said high school teacher Shari Scott-Sawyer. Compared to the other items on the new menu, this drink offers the most caffeine while remaining on theme with the holidays.

“I liked the new Iced Sugar Cookie Almond milk Latte,” said Clark graduate Elen Sayamyan. The new latte does a great job making the taste of the sugar cookie come through by incorporating a new Sugar Cookie flavored sauce with the regular Blonde espresso mixed with steamed almond milk. The drink made its debut this year and depending on its success it may come back following years along with the other beloved festive drinks.

A common trend among these drinks is overwhelming sweetness. “Sometimes I just want a coffee to make me feel in the holiday mood without all the sugar,” commented Sayamyan. Though the holiday caffeinated drinks technically hold the same amount of caffeine as their regular counterparts, that doesn’t always feel to be the case. The caffeine is oftentimes pushed under the rug because of the bursts of sweetness from the sugary sauces and syrups. With so much sugar, the caffeine loses its waking effect making the holiday coffees seem less caffeinated and not ideal for waking the brain.

Many different versions of hot chocolate made the list as well. For the past twenty-four years, the Honey and Almond Hot Chocolate along with the Fudge Hot Chocolate have been on the winter menus. These traditional drinks made their comebacks once again this year offering a decaf option for younger kids or adults with a sweet tooth. “My brother can’t get enough of the Fudge Hot Chocolate,” said Sophomore Elin Arakeilian. The drinks lacked a significant change from the original hot chocolate, making them slightly disappointing, however, there must be a high demand for these drinks to be brought back for so many years.

Starbucks will continue to release seasonal menus in upcoming years, pleasing many of its customers. The peppermint, chestnut, and other seasonal syrups are also available for customers to customize their regular drinks and add a dash of the holiday spirit for the time being. This gives customers the freedom and creative flexibility over their drinks, something many Starbucks lovers enjoy and appreciate. Customers wonder what Starbucks will have in store for the following year as there already seems to be something for everyone this year.