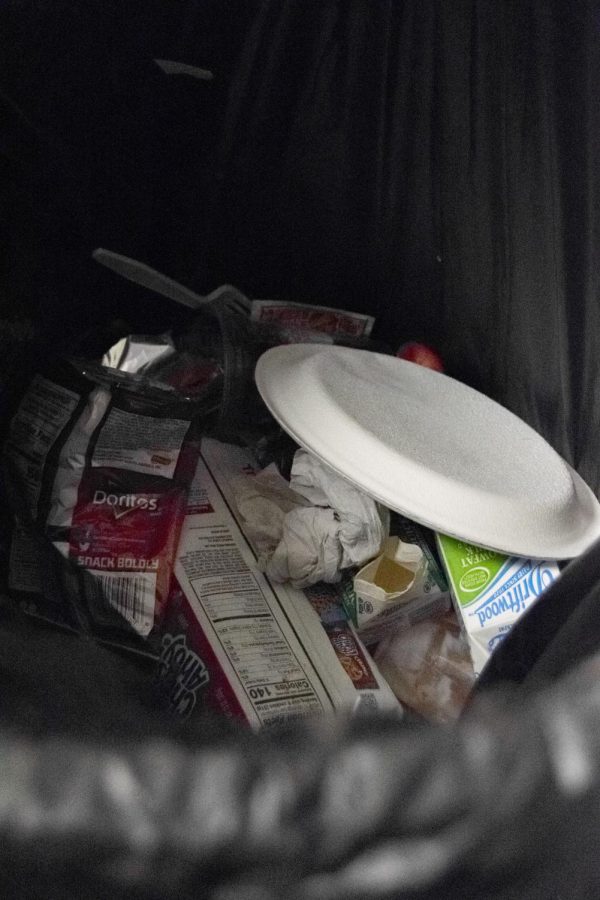 Every day hundreds of pounds of good school lunch food is wasted since many students who are forced to have their plates full end up throwing away the things they do not wish to eat.

You hate to see it. Strewn across the various tables and hangout areas on campus, a wasteland of perfectly good cafeteria food is carelessly left alone the second lunch ends. From unopened juice to burgers still perfectly wrapped in packaging, seeing all the food idly forgotten is nothing short of painful.

It’s a problem that shouldn’t exist, and if I had my way, I’d be more than willing to eat all the abandoned meals students decided not to eat. Many think the issue is solved once someone throws all food left behind in the waste, but the real problem, however, beings once all that food reaches the landfill.

According to the National Farm to School Network, public schools produce about 1.9 percent of food waste in the country, which each student accounting to about 36.5 pounds of wasted food. Although some schools, like Clark, have attempted to minimize school food waste by donating some of the leftovers to the homeless or to those who need the food, but even those efforts have fallen short given the amount of good food left rotting in the trash bin.

At this rate, a one-stop fix is not enough to resolve this major food waste issue. A change in policy and greater effort to reduce that waste is what’s ultimately needed to minimize such a counterintuitive issue.

Some may argue that it’s a by-product of former first lady Michelle Obama’s Healthy, Hunger-Free Kids Act. The act, although beneficial to the long term health of kids, required all students to be given fruits and vegetables. Since it was mandatory for kids to have some form of fruit and vegetable on their plates, regardless of whether they really wanted it or not, many students end up throwing them away since they originally didn’t want the extra food in the first place. The law has inadvertently increased school food waste by a whopping 56 percent and although it may have good intentions, it also contributed to an already growing problem of waste that has also cost the government quite a pretty penny.

The United States Department of Agriculture reports that almost $5 million worth of edible food is wasted every day, totaling up to a whopping $1.2 billion in wasted food per year. Instead of enforcing a mandatory fruit and vegetable policy, the government should rethink its stance on school lunches and make those foods optional for students as well as expanding efforts to use the uneaten food that remains.

By encouraging kids to take foods they’ll know they’ll eat would not only prevent more food from joining the trash bin but would also save the government a large sum of money. Since students would be able to opt to refuse the food they don’t want to eat, a portion of the uneaten food could be salvaged and then donated to homeless shelters or can be composted into free soil that could benefit the campus greenery.

Simple fixes in the laws and policies that make up the federal school lunch program is all that’s needed to resolve the growing issue of food waste. It’s surely a doable task, and those changes won’t only affect schools, but also the students and their communities, one meal at a time.