Trump shouldn’t have pulled out of Syria 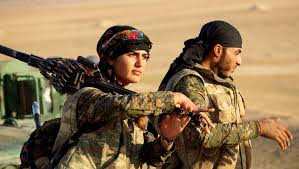 Viyan Antar, a Kurdish fighter of the Women's Protection Unit, or the YPJ. She died at the age of 19 liberating the town of Manbij from ISIS.

On Oct. 13, the Trump administration made the decision to pull American forces out of Syria as part of his plan to pull troops out of the Middle East in general. This action automatically came under harsh criticism, and for good reason.

The main criticism was that this would leave the Kurdish militants of the Autonomous Administration of North and East Syria, also known as Rojava, open to being attacked by Turkey, whose government has been adamantly anti-Kurdish inside its own borders and outside as well.

A bit of backstory is needed. Ever since the Republic of Turkey was established in 1923 by Mustafa Kemal Atatürk, there has been a strict policy of Turkification, or encouraging the Turklish culture and language to be the dominant one in Turkey. This involved the outlawing of any other language being spoken (this law has yet been repealed), and this was harmful for every minority in Turkey, specifically the Kurds, who make up 20 percent of Turkey’s population.

In face of oppression by the Turkish government, a Kurdish insurgency rose in Turkey in the 1980s called the PKK (Kurdish: Partiya Karkerên Kurdistanê‎), or Kurdistan Workers Party. Generally defined as a terrorist group, they fought for Kurdish rights in Turkey using guerrilla tactics.

Rojava, while taking light inspiration from the PKK, is not the same thing as the PKK. First of all, Rojava is an area with many ethnic groups, such as Arabs, Turkmen, Assyrians and Armenians, as well as Kurds. However, Turkey doesn’t see Rojava in Syria, Turkey sees the PKK that has been carrying out terrorist attacks in Turkey for the last 40 years.

Wasting no time, Turkish forces invaded Syria under the ironic title Operation Peace Spring (Turkish: Barış Pınarı Harekâtı) through the northern Syrian border shortly after U.S. forces pulled out, bombing Kurdish cities and attacking civilians. This has led to worldwide condemnation and even the Syrian President, Bashar Al-Assad, has stated that there will be war if Turkey doesn’t pull out of Syria.

While less American involvement in Middle Eastern politics and wars is a good thing, what the Trump administration fails to understand is that pulling out in one action with no regard to the consequences is ignorant and doesn’t take into account the complex and downright confusing nature of the Syrian Civil War, especially if it’ll displace almost 300,000 people. Opposıng what Presıdent Trump saıd, “like two kids in a lot, sometimes you have to let them fight” is not a good way to deal with ethnic warfare like the one Turkey’s president, Recep Tayyip Erdoğan, is so adamant about conducting.

Not only was this decision hasty and irresponsible, it is a stab in the back to the Kurdish militants who gave their lives and allied themselves with the U.S. to help fight ISIS earlier in the Syrian civil war. This betrayal just spits on the hard work of both Kurdish and American soldiers who risked and gave their lives in Syria.

This also ruins and holds back the possibility of peace in the Middle East, which the U.S. has apparently been trying to work towards and maintain. It goes unsaid that directly opening up the chance of more war and bloodshed is counterproductive, especially since the only reason Turkey wasn’t bashing Rojava was because the U.S. was there, and if they were to attack the U.S., that would be it for Erdoğan.

However, sınce the US ıs now out of the equatıon, Turkish government forces can have a field day with NATO supplied weapons on U.S. allies.

One also has to question what the U.S.’s goal in the Middle East is anymore. Is it to provide protection to civilians and keep groups with malicious intentions away by helping the people living there with their armed struggle? If so, why did it so carelessly leave a friendly guerrilla group open to be attacked by the single biggest anti-Kurdish force of the century? Why would it let 300,000 innocents get displaced while there was a huge refugee crisis going on just a few years ago?

This ignorance of the Kurdish situation by the West has been going on since the mid-20th century. In order to keep Turkey, a NATO member, calm and friendly, they ignore the crimes and massacres that the Kurds face, all in the name of politics. One can’t help but draw comparisons to the genocide of Armenians by the Ottoman Empire during the late nineteenth and early twentieth century.