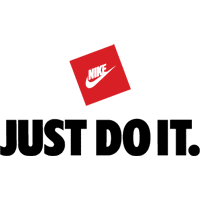 The Nike logo and slogan.

Ever since it was first seen last Labor Day, Nike’s “Just Do It” advertisement featuring social activist and blackballed quarterback Colin Kaepernick continues to be the talk of sports world. The ad campaign included a commercial that appeared during the NFL season opener. It specifically featured a Kaepernick voice-over saying the slogan “Believe in something. Even if it means sacrificing everything.” The tagline came at a time where Kaepernick himself has been under the spotlight both for his controversial national anthem protest last year as well as how NFL teams continue to overlook his talents reportedly due to his political stance.

In light of the campaign, many Americans reacted quite differently in the most stereotypical way. Conservative, white Republicans more so denounced Nike for supporting an athlete like Kaepernick who mixes both sports and politics. Many of them called for a national boycott of the company as they burned their Nike gear and cut the iconic swoosh off their socks — acts meant to attack Nike’s brand and reputation.

But in reality, Nike has never officially supported Kaepernick’s view; they just put up a banner with his picture and their logo on it together. Let’s face it: Nike isn’t making a stand, as it is a company that wouldn’t dare take an unaccounted risk to make a stand. Instead, the company is making a wisely calculated move by betting on the “other Americans.”

Who are these other Americans, you ask? Well, these are the once silent minorities and younger people now making their mark by influencing major companies like Nike. They are the urban influencers, folks who probably have more than a thousand followers on Instagram, people who stand up for a political cause, the people you see on the musical stage, on the silver screen…everywhere. And those are the type of people that are dominating the markets and continually shaping the culture, something Nike understands to a tee. By following the trends supported by the group, like the social activism Kaepernick partakes in, Nike is just following the crowd in order to increase profit.

In the end, the conservatives’ call for a boycott hasn’t even scraped the surface of Nike’s bounties that have resulted in the Kaepernick ad. Nike’s online sales have soared through the roof with a reported $48 million profit and a 31 percent jump in online sales.

The tides have changed as the modern audience and consumers of Nike’s products are no longer old, conservative Republicans. They are socially and racially diverse people that more and more companies are taking advantage of, including Nike. Conservatives should wake up and realize they are not the majority of this new market; they are the minority.