Protests are indeed the way to change 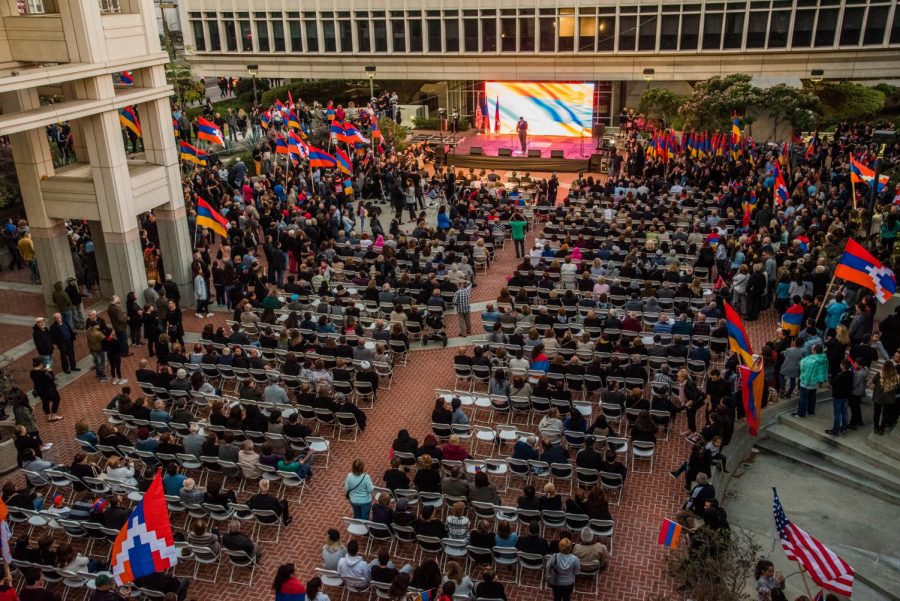 People gather at City Hall on April 23 to commemorate the Armenian Genocide.

Happiness, disbelief, joy and excitement flowed through the streets of Yerevan, Armenia and Glendale, California as Serzh Sargsyan, the disliked leader of Armenia, announced on April 23 that he would be resigning after almost two weeks of public protests in various cities around the world. This remarkable outcome caught many people by surprise since the true meaning and intention of protests have, unfortunately, been lost in today’s society. Protests are not only ways to cause disarray or gain attention, but more importantly, a crucial way for people to initiate change.

Protests can be tremendously effective, as seen with the downfall of Sargsyan. They do not always end with such positivity and triumph, though. Armenians in Los Angeles gather on April 24 every year to participate in the Armenian Genocide march, hoping to earn recognition for the genocide by the United States government. Despite the protests and many politicians’ efforts to persuade the government to accept the truth of the genocide, the United States still has not officially recognized it.

However, this does not mean that the protests have been useless or unavailing. Even when protests seem to be ineffectual or not worth the effort, they are still extremely valuable to society. According to The Duran, as of February, 2017, through the dedication and continuous efforts of Armenians protesting all over the world, 28 countries have officially recognized the Armenian Genocide. Although the United States is not one of these countries, protesting could be the key to adding the United States to the list.

The role that protests play in triggering change cannot be forgotten or disregarded, especially in America. Protests have been ingrained in America’s history ever since the founding of the country. The civil rights and women’s suffrage movements were only successful because people believed in the power of protesting and had the courage to stand up for what they believed was right.

However, a survey done by Statista in 2018 showed that only 14 percent of the people interviewed had participated in any form of public protest in the last two years. This number is dismaying. With the amount of controversy and differing opinions surrounding so many issues today, this number is far too low.

Protests have the power to make an immense, meaningful difference in society. People should not be worried about the consequences of protesting or think that their participation does not matter; every single person has the ability to create change if they are brave enough and passionate enough. It is their duty as citizens to use their First Amendment right and protest for what they believe is right, no matter their age, race, ethnicity or gender.