Feminism does not mean that the future is female 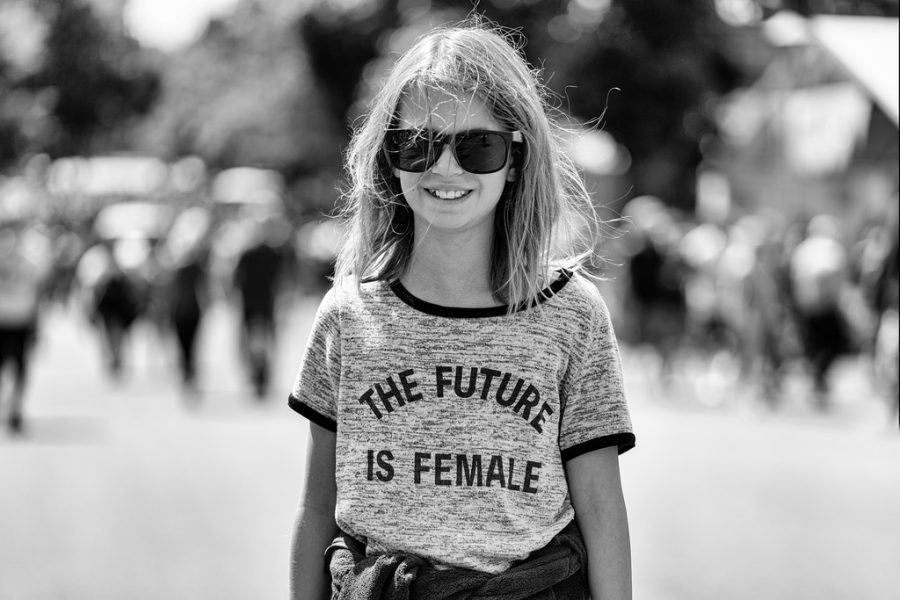 : A little girl sports a "The future is female"

Sitting in my English class discussing feminism, one of my classmates said that he is not a feminist because of  “2017 Twitter feminism,” which apparently argues that females are better than males. And really, I can understand why he does not consider himself to be one.

With social medias today such as Twitter and Instagram fueling the feminist movement, it’s no wonder that feminism is becoming one of the hottest issues resulting in many young girls and women to become “woke,” which of course is never a bad thing.

However, exposure of the feminist movement in media has also become a way for big clothing companies to profit off of women by selling T-shirts with slogans such as “Girl Power” or “Girls Support Girls,” and the one and only problematic one — “The Future Is Female” slogan. The trend started from a company called Otherwild after Hilary Clinton stated that the future is female, and from there, it spread like wildfire to stores such as Forever 21, Topshop, etc, etc with different wordings but the same meaning.

Celebrities including Cara Delevigne, Chloe Bennet Ariana Grande expressed their support by publicly posting photographs of them with the said T-shirt on. And with their platforms in media today, it’s no hard work to influence many of their fans, if not all, to believe the same thing.

As empowering as it may to say and hear that the future is female, the slogan is still wrong. The problem with the slogan is that it is a toxic phrase that poisons the feminist movement and distorts its true meaning. By a dictionary definition, feminism means “the political, economic, and social equality of the sexes.”

Feminism does not mean females are more important than men. But that is exactly the belief that the “The Future Is Female” slogan is achieving. It doesn’t solve any of the issue in the inequality of the sexes. If anything, it just puts a bigger wedge between females and males.

For years and until now, the belief that males are the superior sex with women as their inferiors has been instilled in people’s minds, which caused the inequality between the sexes. And to proclaim that the future is female is just reversing the whole situation.

Just imagine a little boy hearing that the future is female, or worse, being taught that the opposite sex is the future. Sounds familiar? Yes, I bet it does. That is how little girls and little boys were taught in their childhood — that men are smarter or more powerful.

And they grow up believing just that, according to a research done by the journal Science. And that is the exact situation with the slogan, but reversed. So, how is it helping the issue? It doesn’t.

Yes, women have been treated unfairly for who knows exactly how long while at the same time expected to act a certain way, which is not to say that men didn’t have their share of gender expectations, no matter how little of a share it may be compared to women’s. But that is why feminism exists. Just because the word feminism has the prefix “fem” does not mean it only benefits women because it benefits men as well.

Feminism does not mean women are more important than men or that women should get special privileges. It merely means equal treatment for both. Feminism is for women and men. “The Future Is Female,” however, is exclusively only for women. It signals that females will become the “more superior” sex when there shouldn’t even really be a “superior” sex in the first place. It perpetuates the misconception of feminists as femi-nazis or misandrists. It doesn’t demolish the ever-present patriarchy, but rather, upends it.

So take note, clothing companies. While slogans on clothings such as “Girl Power” or “Girls Support Girls” are positive ways to support women, the “Future Is Female” is not. It does nothing good but spread a problematic ideology.