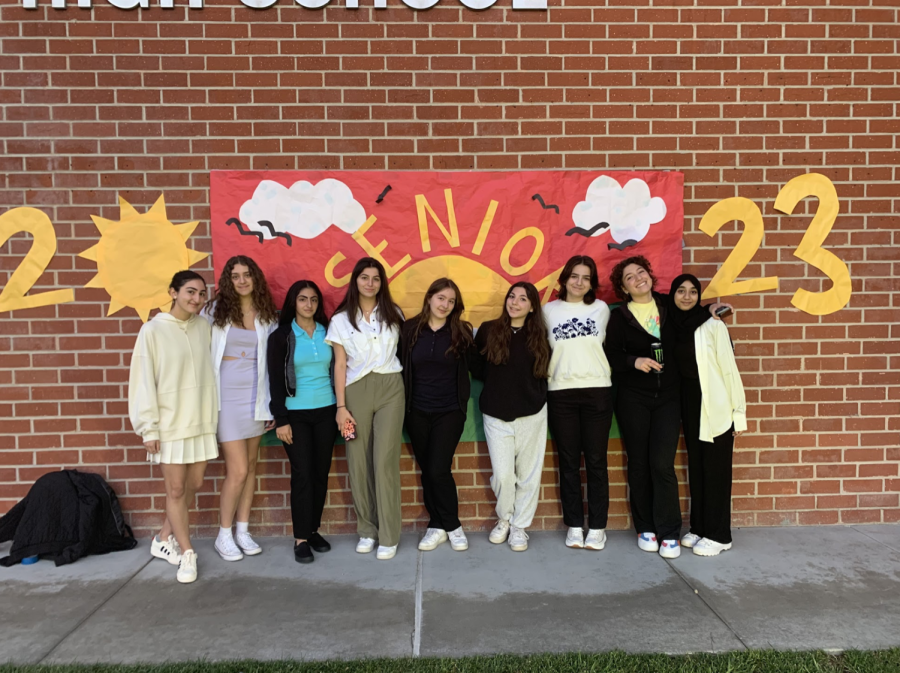 A senior group of friends enjoying each other's company at the Senior Sunrise.

All throughout high school, students tend to look forward to one thing and one thing only: Senior year. As the first few weeks of school come to an end, the class of 2023 is pumped and ready to jump start their year. has finally reached their “rite of passage”, the only appropriate thing to do would be to start on the festivities. Senior year is a rite of passage; to kick off the new year, the seniors partake in Clark’s new tradition of an annual senior sunrise. Students often forget they are here for the sunrise; the idea is to wake up while it’s still dark and come to school of your own volition.

Arriving bright and early, students began to file in line for their complimentary Krispy Kreme donut and hot chocolate! The class advisors, Mrs. Ani and  Armineh Mikaelian, along with Mrs. Scott-Sawyer showed their contagious smiles as they were ecstatic to share this special moment with the senior class. Everybody took pictures and stood around the Clark steps to watch the sunrise. Since people were more excited for the next part of their day, many students missed the class photo. Most people had fled the campus before the picture was taken but those who remained still enjoyed their time at Clark, whether they had blankets and a deck of cards or just the company of their friends.

As soon as the sun was up, seniors ran in a hurry, scurrying to be the first out of the parking lot. Some groups went to IHOP, McDonald’s, Starbucks, or even hung out at the park down the street. Senior Lilia Zargaryan couldn’t wait. “My friends and I wanted to go to IHOP but we ended up at McDonald’s instead. We still had an amazing time since we spent it all together,” said Zargaryan. As fun as the sunrise was, many people enjoyed the outings that took place after.

The first event of the year isn’t something seniors should miss! Senior Sunrise is not an event that anyone would want to miss. Attending the event is like opening the floodgates to senior year, building up excitement for one event after another. As most of the time students dread the thought of coming to school, the senior sunrise is to be the only exception as students arrive at Clark by 6 am. “I don’t usually like waking up early, but I was excited to have fun with my friends,” said senior Romina Shabany.

Each event strengthens the bonds, both old and new. With the legacy the class of ‘22 left, the class of ‘23 wants nothing more than to have an amazing Senior year experience like them.  Although senior sunrise was short-lived, the memory will last a lifetime as the seniors begin their journey.