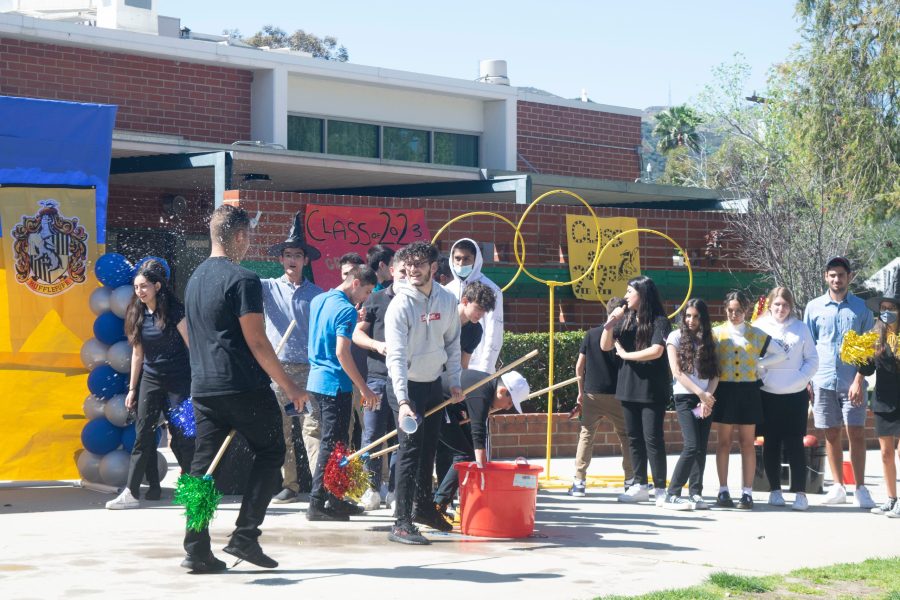 Students enjoyed dripping each other with water balloons at the end of the obstacle race game.

On Thursday March 24, Clark’s spring rally took place after students came back from a week-long spring break. After last semester´s High School Musical theme, ASB decided to make this rally Harry Potter themed. The rally took place after fourth period and was divided into two separate rallies, each lasting 50 minutes each. Classes were divided by grade and seated in themed “Hogwarts House” areas. Students sat with their friends and cheered for their classmates participating in the games.

Like the last rally, the first event was a performance of the national anthem by sophomore Tina Issagholian. Everyone stood up and faced the flag as they listened to the anthem.

ASB then gave special recognition appreciating the hard work Clark students put into their academics this year. The Mock Trial team received recognition for putting in a lot of after-school work time to prepare for their upcoming competitions. In addition to the Mock Trial team, Clark’s Robotics team, Team 696, also received recognition for placing eight out of forty schools in a competition. They also have more competitions to come. Athletes at Clark were commended for playing for their home school and practicing hard.

Behind it all, the Emcees tried their best to entertain everyone despite the sweltering heat. Junior Emcee Eva Sarkisjan reflects on their efforts as entertainers:, “Rally A did better than rally B, because it [rally B] got out of control and people were leaving early; it was really hot and unbearable so they couldn’t stand being in the sun¨

To conclude it, students listened to junior Leo Khodaverdi perform a jazz remix on the drums called “Chick’s Pain” by an unknown artist. “I was approached by ASB and members of Scott-Sawyer’s class asking me if I could play something. I said ‘sure, why not’ and I played this song I enjoyed listening to,” said Khodaverdi.

After the rally was over, ASB spent their sixth period cleaning up. “Cleaning up took probably less than an hour. We stayed during the sixth period to clean everything up and it wasn’t that bad¨ said Sarkisjan. Junior ASB member Sara Lala had drawn the backdrops. Altogether, ASB members had put in their best efforts to make the rally a success.

“It was fun, and it was school spirit… #patherpride.” said Junior Emily Hovsepian.