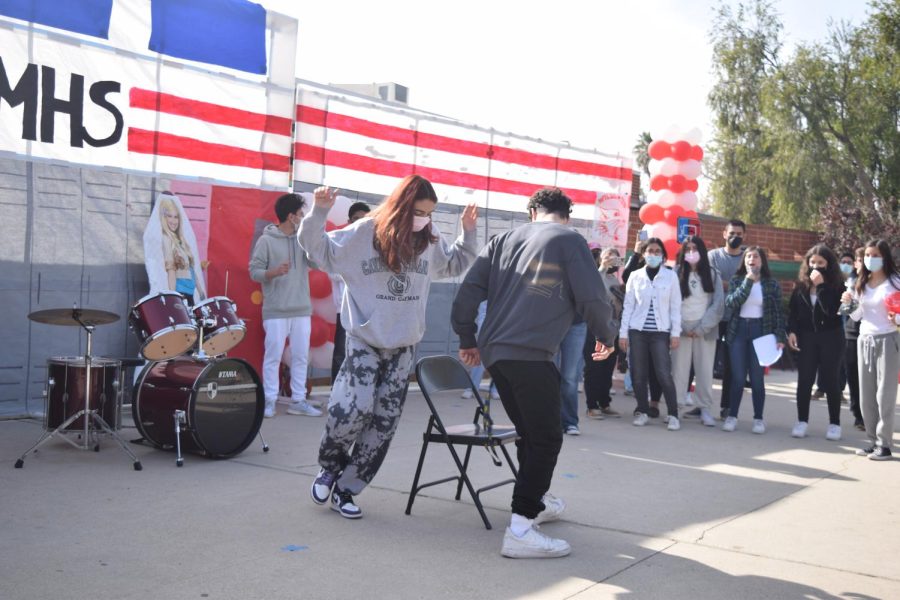 Students cheer for their classmates during a game of Musical Chairs.

On Friday November 19, 2021, Clark’s ASB assembled together a High School Musical themed fall rally after the pandemic lockdown. Students were ecstatic about spending this time hanging out with their friends and cheering for their grade group.

“This year, we came up with the theme through [a] class vote. Some classes came up with different options like music genres and things like that. We voted High School Musical in because it seemed to be the most cheerful and incorporating,” said sophomore ASB member, Agustine Tahmasian.

Both rallies were divided into three main parts. After everyone was seated in the amphitheater, ASB gave a short introduction and the National anthem was sung. Students stood and faced the flagpole, while junior Elina Tsadourian sang the anthem. “I was really happy that I did it and I felt really proud about myself; I gotta say my most memorable part about the performance was the rush before performing,” said Tsadourian. “I really liked the feeling before and after. The feeling during it was scary, but I would definitely do it again next year.”

After the performance, student volunteers were chosen to participate in games made by ASB. They spent a week coming up with and preparing for the games. These included Musical Chairs, Cup Pong, and Basketball, which attracted lots of participation from the audience.

Students also were encouraged to cheer for their classmates who were participating in games. Musical chairs were a great hit for the audience, but some players felt that the management of the games could be better. .“I felt cheated when that boy shoved me off the chair,” said sophomore Kristina Mnatsakanian. “It was really fun though, musical chairs were still my favorite. It was very fun watching our classmates play against each other, if it happens again next year I’ll enjoy it.”

“I didn’t really enjoy it because I saw the seniors using their hands and cheating. Maybe I will participate again next year.” said freshman Derek Cugley.

Despite some mishaps, the crowd was still encouraging, with students clapping for those whose chairs were stolen.

Then followed a dance performance by ASB, Dance Club, Basketball Club, and even the principal Mrs. Kortoshian.

“It pretty much took us the entire week to plan and practice the dance because we had to take people in from the Dance Club and teach them the choreography we made up,” said lead dancer and freshman ASB member Alexis Ramirez. “I put so much thought and effort to make my part look good so I really loved it.”

“My most memorable part about the rally was seeing how many students participated and took part in a school activity,” said Tahmasian.  Many students would agree with Tahmasian’s sentiment; the rally proved to be a great opportunity  for students to let loose after a year of pandemic lockdown.

“The best part was when we all worked together to try our best, some people worked on backdrops and some worked on dancing, and it all came together. It is most likely going to happen again next year.”