The Comeback of Hip-Hop Legends 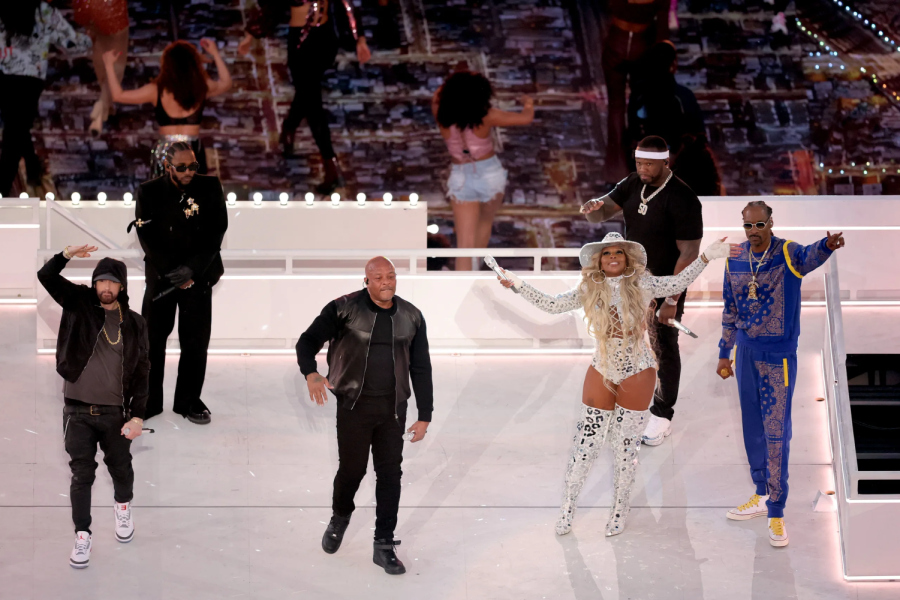 All six legends on stage wrapping up the show.

With a major trailer drop on behalf of the Super Bowl on January 20, 2022, fans were astonished to see the Kings, and honorary queen, of Hip-Hop making a comeback. With appearances by Dr. Dre, Kendrick Lamar, Eminem, Snoop Dogg, Mary J. Blige and 50 Cent as a guest star, the crowds were wild and rowdy as they got to see their favorites perform their top hits.

As the LA Rams were in the lead with a score of 13-10, the Half Time Show had begun. The set itself was incredibly beautiful as it was a perfect clash of modern classiness with the streets. The field was decorated with bright, white fluorescent lights and the stage itself was made up of about 4 open bungalows that were filled with white furniture to represent a family-like home. Three vintage mustangs were parked outside the bungalows to give it the authentic look of “Old Hip-Hop”, much like the music video for “Still D.R.E”.

Getting down to the performances, each and every artist lit up the stage with their authentic looks and most popular songs. Starting off strong with Dr. Dre and Snoop Dogg singing “Still D.R.E”, the crowd’s tension erupted as the artist began to set the mood. Right after, 50 Cent made a cool entrance as he was hung upside down in one of the bungalows. The crowds went wild as Mary J. Blige owned the stage in her flashy white outfit and amazing back up dancers.

Kendrick Lamar isn’t known for old hip-hop but still carries the same vibe as the oldskool legends. His performance was quite different from the rest as he blended in with his crew inside cardboard boxes. He briefly sang “m.A.A.d City” and transitioned into “Alright”. Ending off strong with Eminem rapping “Lose Yourself”, the artists rejoiced one last time to wrap up the show.

Not noticed by many, two of the artists took a stand against the NFL. Snoop Dogg is a known member of the “Rollin 20s Crips”, an infamous gang. He was asked not to show affiliation but he went against what was asked and wore an all blue tracksuit with a bandana pattern; something specific to the gang. Eminem had also taken a kneel at the end of “Lose Yourself” despite being asked not to. It is still up for debate whether he did this out of respect for 2Pac or for Colin Kaepernick as a stand against racial injustice.

As the audience let loose, the HalfTime show came to an end and on went the neck-in-neck game between the LA Rams and the Cincinnati Bengals. With the game being very close, the LA Rams took the lead within the last 10 remaining minutes with a final score of 23-20.