Excitement Erupts as the Future of Venom Changes Course 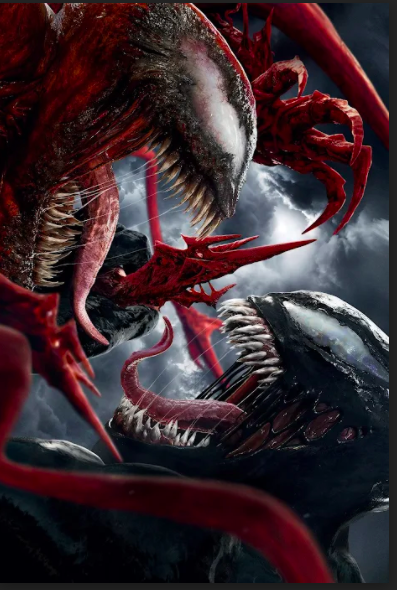 Venom comes face-to-face with Carnage, the villain of the movie.

Venom: Let There Be Carnage was released just a week ago on October 1, 2021 in theatres, bringing excitement in the Marvel fandom. With the original Venom movie having high ratings, many fans were excited for its sequel.

The story of Venom roots back to old Marvel comic books where Eddie Brock, played by Tom Hardy, ends up absorbing an alien-like substance who turns out to be called Venom. The two become a working duo by the end of the movie to fight evil.

The multiverse, the idea that there are multiple versions of the universe we live in, is a concept Marvel recently brought to the light. The character Venom has been seen in two different universes so far, once in 2007’s Spider-man 3 and later again in his own movie, Venom, which was released in 2018. Many people went into the theatres to watch Venom: Let There Be Carnage expecting to see some sort of Spider-man cameo because of the multiverse. Many Marvel fans were also just excited to see Carnage, the main villain of the movie, in live-action as he was seen in previous comic books.

Venom: Let There Be Carnage was an action packed and hilarious movie that many Marvel fans enjoyed. Tom Hardy does an amazing job playing the role of two characters in one. Eddie Brock, comes face to face with Cletus Kasady, a serial killer who Eddie has tried to expose through his news articles. The theatre was filled with laughs as the audience watched Venom and Eddie constantly bickering through sarcasm. It was heartwarming to see Eddie and Venom have a moment of clarity as they finally realized they both need each other to be their best selves.

Eminem, a famous American rapper, was brought back by Marvel for another special song that played during the credits, proving to be a great way to end off the film. True Marvel fans always know not to leave the theatre once the credits start rolling. They remain in their seats an extra 10 minutes to catch a glimpse of where Marvel is heading next after the movie. Venom: Let there be Carnage provided a mind-blowing post-credit scene. Let’s just say that this additional scene has changed the course of the future for Venom in the MCU, Marvel Cinematic Universe. After viewing the scene, all viewers had walked out of the theatre mindblown. It’s clear that Venom will be returning a lot sooner than we thought and fans couldn’t be more excited. MCU fans had arrived with high expectations and left with a thrill for the future.

With $90.1 million sales at the box office, Venom: Let There Be Carnage had amazing reactions from viewers. The movie was hilarious and also heartwarming as the audience was able to meet a new, more sensitive side to Venom.