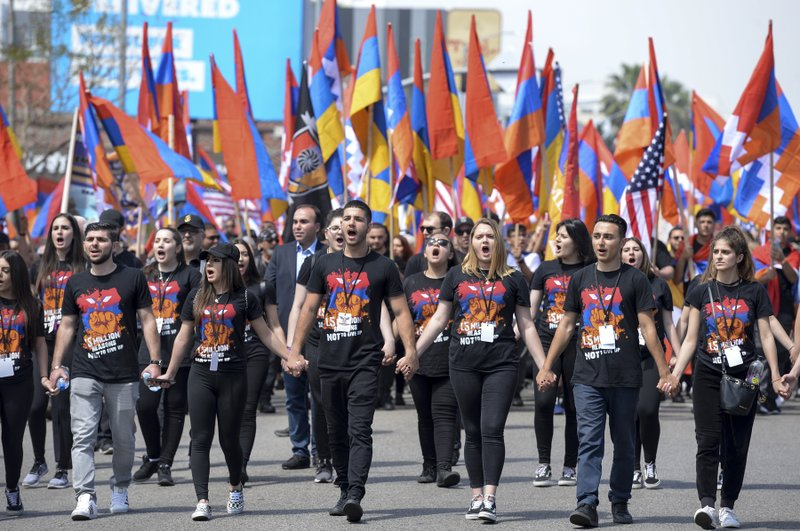 Armenians marched in Hollywood on April 24th in order to recognize the genocide.

After 106 years of waiting, Armenians are ecstatic by Pres. Joe Biden officially recognizing the mass killing of Armenians during the first world war as a genocide. He announced this as a letter on April 21, 2021. Heros Kassarjian, a junior attending Glendale High School, thought that the acceptance of the genocide was well overdue by the United States.

“It’s about time the U.S. accepted the Armenian genocide. For the past 20 years presidents have been promising that they would accept the genocide but would never fulfill their promise towards Armenians and voters in general,” Kassarjian said. “I’m glad that we finally have a president who served justice not only to Armenia, but Armenian people and supporters as a whole by acknowledging the genocide.”

Like Kassarjian, many other Armenians were pleased by the decision of the President and the U.S., but that does not mean the March for Justice on April 24 will stop. Senior Haik Topchyan from Clark Magnet Highschool marched in this year’s March for Justice in Hollywood.

“I mean it’s great and all that the U.S. is finally in support of the Armenian genocide, but this is just a baby step towards our main goal,” Topchyan said. “This isn’t the time for us to stop marching and show how much we care; instead this is when we take advantage and try to push harder to achieve our main goal of getting our lands back.”

Most Armenians are in favor of Topchyan’s mindset, and have the same ultimate goal which is to fight for justice until Turkey and Azerbaijan eventually back off Armenia. Armenians are mainly fighting for one purpose, and that is to get all the lands back that Turkey has taken from them over the years.

Many Armenians are skeptical over why the U.S. decided to finally accept the Armenian genocide. Currently, the United States has very strong ties with Turkey, and the U.S. even has one of its own military bases that is located in Adana, Turkey.

Clark Magnet High School senior Sonia Aydenjian believes that there might be something going on behind the scenes that the public does not know about. “I just feel like it’s a bit sketchy how after all these years they randomly decided to acknowledge the Armenian genocide now,” Aydenjian said. “I have a feeling that the U.S. and Turkey must have come to an agreement of some sort in order for this to happen. I’m just not certain I can 100 percent believe the U.S. acknowledged the genocide just to do it, while they still have an ally in Turkey.”

A worry that many people have is that with the acceptance of the Armenian genocide from the United States, it could potentially lead up to a world war. This is also the opinion of Gianni Nurmamade, a junior from Verdugo Hills Academy.

“The only fear I have from the United States’ recognition of the genocide is that this could potentially lead up to a war,” Nurmamade said. “Turkey and Azerbaijan are both very aggressive countries, and are not afraid to start wars, so hopefully the acceptance of the Armenian genocide does not lead to any bigger political warfare.”