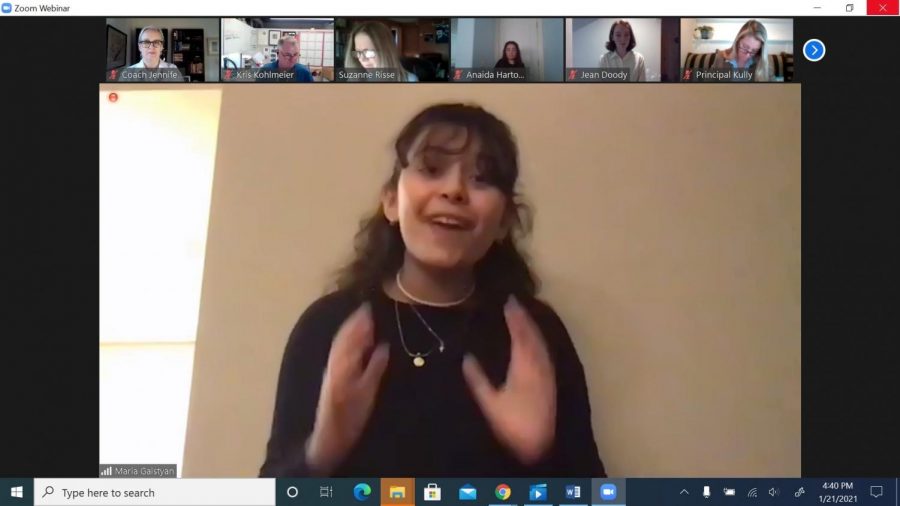 Clark sophomore Emily Simonyan has been in the limelight and in front of an audience since she was about six years old. However, she had to face the challenge of “performing” during the GUSD Poetry Out Loud competition that took place Jan. 21 through Zoom.

“I wish I could’ve been able to perform [in-person] just so I could get a chance to absorb the audience into my performance,” she said. “Hopefully, the competition will be hosted in-person next year and I could finally get that chance.”

Simonyan performed the poems “The Tree by Countess” of Winchilsea Ann Finch and “Across the Bay” by Donald Davie. “I felt like if I was able to recite both poems with the emotions I planned on reciting them with, the judges would be impressed by the range of poems I could recite and perform,” she said. “Reading and analyzing the poems made me realize that not all poetry is difficult to understand and that I actually enjoy poetry with deep emotions and pretty diction, especially if I am able to relate with the author.”

Simonyan and sophomore Maria Galstyan — who placed second in the district competition — and senior Anaida Haroutiunian were the three Clark participants of 2021’s Poetry Out Loud contest. The Clark competition took place Dec. 10 of last semester, during which time they practiced for the district-wide competition.

Haroutiunian chose to read the poems “Who Burns for the Perfection of Paper” by Martin Espada and “We Lived Happily During the War” by Ilya Kaminski. “I mostly practiced on my own but before the GUSD competition Mrs. Davis set up a Zoom meeting because I asked her for advice to improve my delivery,” she said. “I recited one of my poems and she really helped me, especially when telling me how to use hand gestures since I struggled to do so. Her advice… made me more confident in delivering my poems.”

Galstyan, whose competition poems were “I am offering this poem” by Jimmy Santiago Baca and “on the death of Anne Brontё” by Charlotte Brontё, said she was especially excited to participate because she was eager to share her love of poetry with the audience, even if it was virtually. “I initially wanted to enter this contest because I love speaking in front of crowds, and combined with my love for acting and poetry, this was a perfect contest to enter,” she said. “I would have loved to have performed them in front of a crowd in an auditorium, since the feeling of being in front of a crowd is a true adrenaline booster.”

Clark English teacher Jennifer Davis—who has led Clark’s competition for the past seven years or so — was informed that Dr. Narineh Hakopian, Teacher Specialist at GUSD and the person responsible for coordinating the event, made it clear that the district-wide competition was still going to happen. With this news struck some worries in the contestants. “I wasn’t really afraid of messing up as much as I was afraid of the wifi cutting out or the computer speakers breaking and so on,” Galstyan said.

Haroutiunian expressed similar feelings, while also adding that she wished the experience had been different. “Since there was a live audience, it felt almost normal. I was less nervous and much more comfortable,” she said. “However, with the whole idea of standing next to everyone, being in the environment itself and also being able to move around freely, it would have been completely different.

Davis noted that the environment was especially different. “In the past, it has been held in the Boardroom at the district’s office,” she said. “All of the poetry reciters are there with their coaches, there is an emcee, and students perform with a microphone in front of the judges.”

And just because the competition was online doesn’t mean it was any less meaningful or beneficial. Davis says that the Clark finalists were brave to have taken on this challenge. “These students worked hard, chose poems, committed them to memory, and delivered them with the appropriate feelings and intonation,” she said. “They then subjected themselves to the nerve-wracking competition where judges are scrutinizing their every word and gesture.”