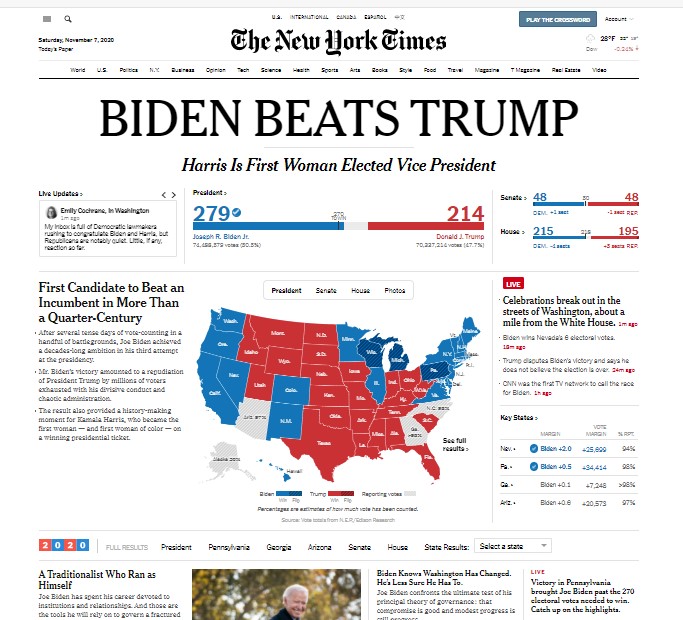 After days of uncertainty, multiple media outlets have called the 2020 presidential election in favor of former Vice-President and Democratic challenger to President Donald Trump, Joe Biden.

Four days after the election, major news outlets declared former Vice President Joe Biden the 46th president of the United States. The Democratic challenger defeated incumbent Republican president Donald Trump in an election that took longer than usual to count due to the influx in mail-in ballots used by voters due to the ongoing COVID-19 pandemic.

According to junior Christine Ngyuen, the presidential election has brought some new feelings. “This is one of the first elections I’m actually following along with and I’m overall confused about why there’s so much misinformation going around and why some people are debating whether certain votes should be counted,” Ngyuen said. “The concept of voting is really simple: people vote, the votes are counted, and the results show the winner but somehow our whole democracy is being questioned over such a basic matter which I find frustrating.”

President Trump has also personally claimed that voter fraud is rampant, taking to Twitter to voice his claims. Twitter has flagged many of the president’s tweets as misleading in response, citing that many of Trump’s claims are baseless and could potentially mislead the public.

“His claims are obviously false, because he has no claim to back it up. He’s hanging on the edge of a cliff, hoping something will save him,” said senior Vahe Haleblian. “All his lawsuits have been denied, showing that even GOP governors are drawing a line between democracy and autocracy.”

Senior Grigor Mkrtchyan thinks President Trump should have been re-elected. “I am supporting Trump, but I don’t know about Biden so much. Based on his meetings with other country presidents, I think he will be against Armenians,” Mkrtchyan said. “I agree with [Trump] because I found some videos from social media where Biden supporters were burning the election papers who vote for Trump.” Across the nation, groups of voters have challenged the processing of the ballots, alleging that widespread voter fraud is being committed in the states. Since the election began, videos began to circulate of alleged ballots filled out with votes for President Trump being burned and disposed of.

Despite the polarizing viewpoints, humor has risen online to decrease tensions. ”I think there is some great humor that has risen during this election. I think memes help lighten the mood and are a great way for people to laugh together,” said senior Edgar Agekyan. “I believe politics should be taken seriously but having a sense of humor is still important.” On Twitter, memes circulated the platform, making fun of the state of Nevada for taking a long time to count the votes.

Senior Jannice Rigor is pleased with the projected election results. “I definitely feel happy, but I am also cautious as Biden isn’t my initial pick,” Rigor said. “However, many of his plans regarding climate change, racial equality, LGBT rights, etc. align with my values and make me feel hopeful for a healing nation.”