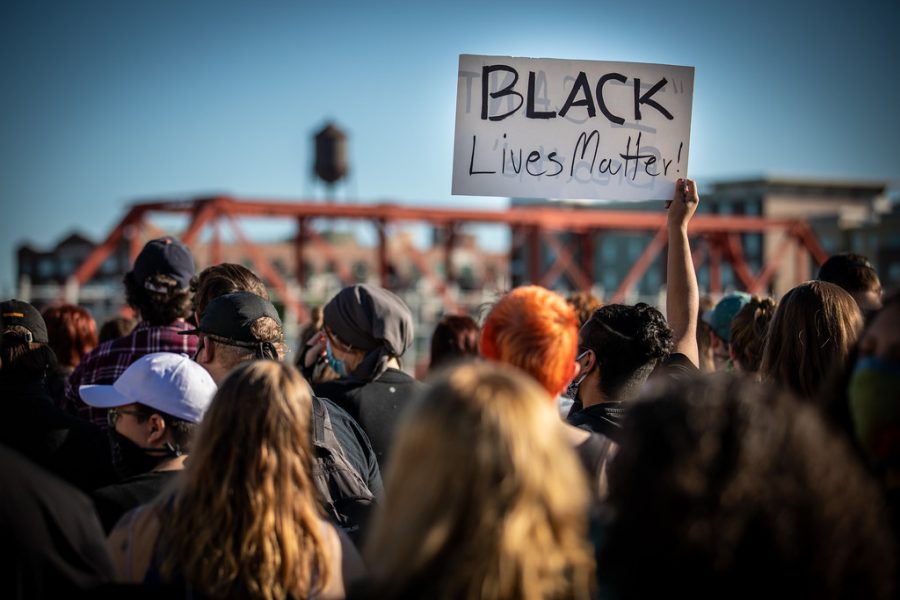 The death of George Floyd has ignited the Black Lives Matter movement across the globe.

“I was absolutely appalled when I saw the video of George Floyd’s murder and the subsequent actions that only led to the police officers involved being suspended,” said sophomore Emika Davis. “While I do support the protests, I definitely don’t think the amount of violence where innocent people are now being hurt should be condoned. Racism has been an issue in the U.S. for centuries and the fact that African Americans still don’t feel safe is horrible, and there absolutely has to be change.”

The recent murder of  George Floyd has affected people all over the nation. What started off as a black man who was killed by Minneapolis police officer, Derek Chauvin, has now turned into a “Black Lives Matter” movement. Big corporations such as Nike and Twitter have now joined this movement and are helping by spreading awareness.

“The reaction to George Floyd’s death is unlike anything I’ve ever witnessed before on social media. I’m seeing a lot of my non-POC friends sharing petitions, articles and resources. I believe that it takes the majority, the people born into privilege, to use that power to stand up for those who have an unjust disadvantage solely because of the color of their skin,” said junior Sophie Peineke. “Above all though, these events have encouraged me to start a real dialogue with those who may not be heard. Going forward, I no longer want to come from a place of ignorance, but from a place of awareness.”

“I find it really sad that history keeps repeating itself. George Floyd is just one example of the black community being targeted just for their skin color, something they can’t even control,” said sophomore Anisa Alam. “I’m sad I can’t protest because I’m a minor, but it makes me happy to see all these people coming together and being united by BLM.”

Chauvin, who is responsible for killing Floyd, was arrested and has been charged with third-degree murder and manslaughter. This is not the first time Chauvin has had a complaint against him.

Despite Chauvin being convicted, people are not satisfied and have started to take matters into their own hands. Throughout Los Angeles, Las Vegas and Phoenix, there have been violent protests with thousands of citizens holding signs saying “ He said I can’t breathe. Justice for George.”

Sophomore Roan Thibault from Crescenta Valley High School believes that police officers, like the ones who killed Floyd, should be held accountable for their actions. “I rarely feel unsafe in the presence of a police officer. This is a sentence that many African-Americans are unable to say. With this recent situation, it is clear that criminal justice policies here in the U.S. are woefully out of date,” said Thibault. “The onus should not only be on African-Americans to speak up. White people like myself must recognize our privilege — the ability to say that first sentence — and use it in a positive way to build a more equitable society for everyone.”

Since the killing, protests have rocked the nation, including a June 1 protest in Santa Monica which led to hundreds of people being arrested after a variety of businesses being destroyed. Pharmacies and grocery stores were looted and left almost completely empty. On the same day, a curfew was placed at 4 p.m for the entire city.

“I recently saw the protest in Santa Monica where everyone was chanting ‘black lives matter’ and holding signs while walking peacefully down the street which was nice, but I also saw a lot of people looting stores and leaving,” said freshman Isabel Castillo from Glendale High School. ”I’m angry about the people who see what’s happening to these innocent people, but refuse to speak up about it. It doesn’t make sense to me. I’ve seen a lot of ignorant people who blame the peaceful protesters, and it’s sickening seeing their true colors.”

In Minneapolis, protesters have started to burn down police stations which led to officers abandoning them. Minneapolis Mayor Jacob Frey had to go on live TV and explain that what people are doing is unacceptable and stated that they are doing everything possible to maintain the peace. Protesters have seemed to ignore the mayor’s words and continue to burn down buildings throughout the city.

Although the City of Glendale has remained clear of protests, there were two curfews in Glendale recently — May 31 at 6 p.m and June 1 at 5 p.m.

On June 2, the principal of Clark Magnet High School sent out an email regarding a student who had posted inappropriate, racial messages on social media.

“I feel bad about the fact that this student somehow learned to be hateful towards others. That they want to spread that hate and have a blatant disregard for people’s feelings,” said sophomore Sabrina Spatny. “I feel bad that he won’t know how to function in our modern America where in order to succeed, you need to know how to be kind to others and love one another.”

Although no specific information regarding the case can be released, the Glendale Police Department has taken this into consideration and it is an ongoing investigation, according to the email.

Celebrities have also used their big platforms to spread awareness. Artists like Harry Styles, Shawn Mendes, Selena Gomez and Jordan Fisher have gone to Twitter and expressed their feelings about this whole situation. All of them express feelings of disgust towards racists and believe that everyone is equal, despite what color their skin is.

“Hearing about this injustice against Floyd’s death really disappointed me because I had hoped that humanity would have gone past racism, past physical appearances, past labels and treated every human with decency,” said sophomore Janet Jong. “I feel like that little hope I had just vanished. This increased discrimination really is endless and that is really, really sad.”