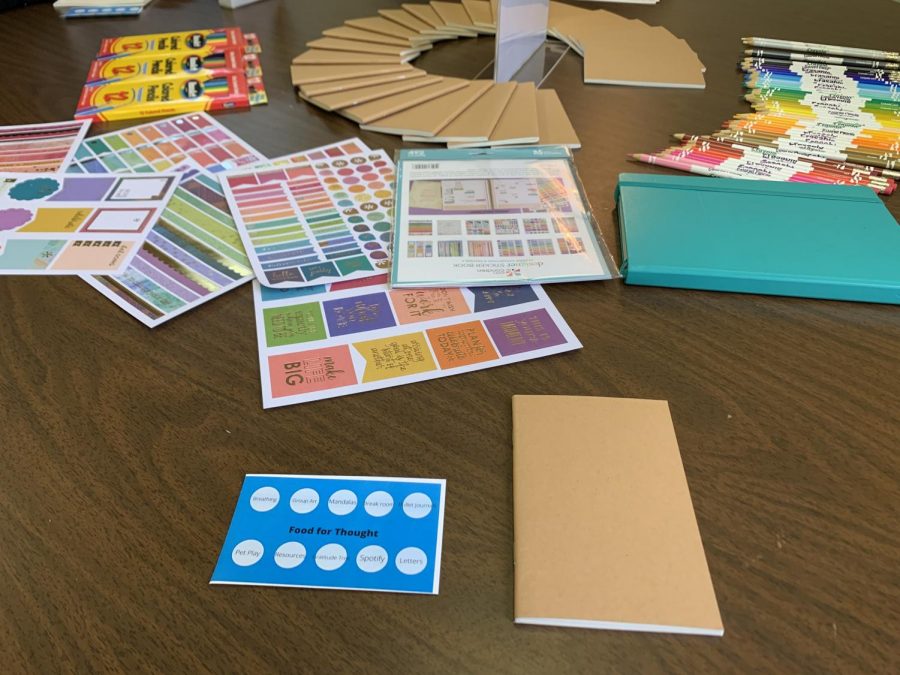 What better way to de-stress from all of the curveballs life throws than to smash plates from a balcony?

and gave students a chance to de-stress and focus on some self care. There were ten different stations set up, with a volunteer in each to present an activity that helps one better their health, such as performing breathing exercises.

The “breathing exercises” station wasn’t the only station set up to help decrease everyone’s stress, but coloring mandala pages were also placed on a table in order to increase calmness. Juniors Francheska Larcena, Santana Molina and Andre Hiwatig were in a stress-relief zone as they spent some time on the mandala coloring pages while junior Sophie Peineke sang and played her guitar.

Another station featured art drawn in a circle on top or somebody else’s circle with a Sharpie marker. The circle drawing was a metaphor, in that if one tries to draw a circle by themself, it’s not perfect, and that goes for everybody. However, when everyone draws their circles together their flawed and imperfect circles form a strong and beautiful circle.

Peineke sang “Secret for the Mad” by Dodie Clarke and had the audience sing the chorus: “I promise you it’ll all make sense again.”

“The song lets you know that even if things aren’t perfect, maybe you’ll be able to make more sense out of them at some point,” Peineke said.

As soon as one walked near the entrance of the church, they were met with a wagging tail and four feet ready to remove all of the stress from their minds. “Pet play” was a station where one could pet a service dog.

Another station, the “Break Room,” allowed everyone to express their less-than-pleasant emotions rather than be afraid of them. “The purpose of this activity is to cope with your stress even if you’re not directly approaching it,” Peineke said. “What you do is you take a little plate and you can write whatever is stressing you out on it — it can be one thing or a whole lot of things — and then you chuck it off the edge of the balcony and watch it shatter. It symbolizes how even if it’s just for a moment, you can say goodbye to your problems.”

This was Larcena’s favorite station and she had fun being able to break something. “I loved being able to put some of my stress onto a physical object and release it for one day even if it wasn’t exactly real,” Larcena said.

The “Letters of Encouragement” station, located right next to the “Gratitude Tree” station, allowed people to either write a letter to themselves which they would later receive as a fun surprise or write to a stranger in hopes of brightening their day. At the station, there was a giant trifold with important information regarding hotlines (suicide, domestic violence, etc.) and apps one could download to improve their mental health. For instance, the app “Calm Harm” provided breathing exercises and distractions in order to help prevent self-harm, while the app “Clear fear” helped approach anxiety.

Food for Thoughts was the end of the first season for The Difference, a student group that wants to see positive changes in their community. A season for The Difference resembles a television show where each one focuses on a different subject. Their first season started in January and their main focus was on gun control and mental health in schools. Currently, they’re taking some time off, but their second season is scheduled to start in March where they’ll talk about inclusion in schools.