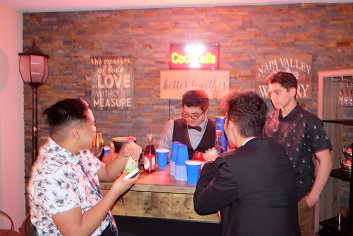 When Clark Magnet’s Hollywood Red Carpet Formal was cancelled, a group of students decided to take matters into their own hands and host their own junior formal at junior Aleks Zadorian’s house. “It was hard because we didn’t have the money or the room of our school,” Zadorian said. “But overall it was really good. We had all of our friends there and we all danced and had a lot of fun.”

The money that would have been used to buy a ticket to Clark’s formal was put into a fund for decorations, food and drinks to fuel the night of fun. At $30 per person with 12 people attending, the party was sufficiently stocked with blinking lights, food and ingredients for a night of endless Shirley Temples.

Clark students attended as well as some of their dates coming from other schools such as Crescenta Valley High School.

Some of those who attended said they enjoyed the “mock” formal more than previous formals at Clark, deeming it more accepting within a group of friends. “The mock formal was really nice for me because it was within a group of friends,” said junior Ava Garcia. “I could dance with my girlfriend and not have to hide something that was really important to me, and I could be as myself as I could be.”

With music provided by a Clark student, people easily danced and sang all night long. “Mock formal was the most fun I’ve had at any non-Clark Clark function,” said junior Max Kovach. “If it was an annual thing I would most definitely party with that group again.”