Club rush attracts more students than ever before 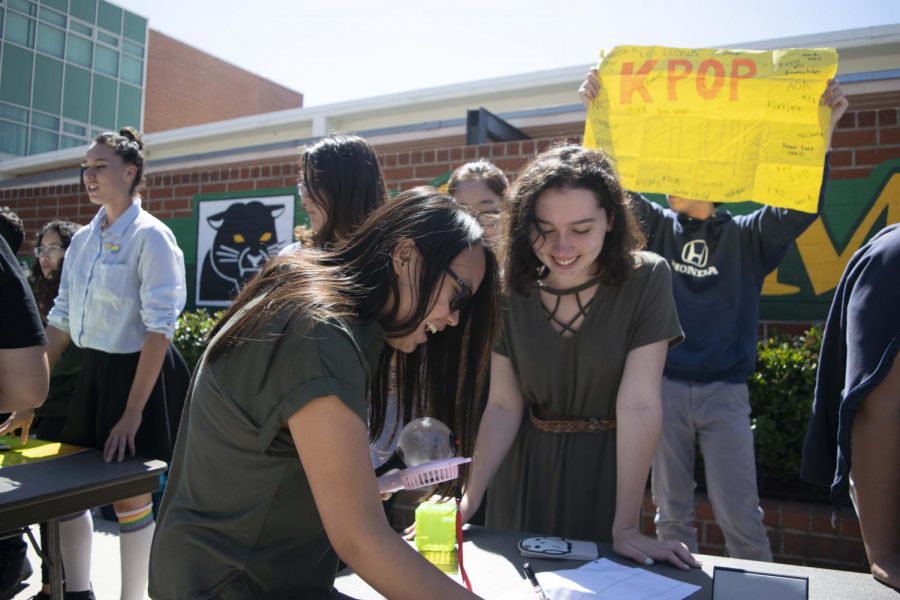 You’d think club rush would be the same every year — the mundane chants, the lackluster posters, and the identical clubs that attract the same amount of people. No. With a single snap of her fingers, ASB advisor Elaine Snodgress, shocked by a significant influx of new clubs, immediately called an emergency meeting to deal with this problem: how to fit all 40 clubs fit in a tight amphitheater.

It was the day of club rush. The nervous tension stretched across room 5201. The anxious glances, the communicative gestures, and the silent room quickly changed as Snodgress pulled out a stack of paper, approximately 50 pages or more. Each time Snodgress handed a copy to a student, people behind or in front would try to peek at what was on that page.

All eyes in the room were directed to the ASB advisor, looking for answers. Snodgress announced to the classroom that this year would be a “little” different. Instead of all the clubs meeting down at the amphitheater all at once, half of the existing clubs would meet down at the amphitheater on Monday and Tuesday and the other half on Wednesday and Thursday. The meaning of the paper would soon make sense. Each club was designated a certain day and time for club rush to begin.

So, with a sigh of relief, club presidents relaxed their worries about club rush and exited the room to immediately prepared for the club rush at lunch.

With only with 15 minutes to prepare for the impending chaos, students arranged tables, set up posters and placed incentives in an unorganized fashion only to be startled with the school bell, indicating class was over. Students raced down the stairs and freshmen gathered along the club tables.

It started once again, the madness of the club rush. But this year seemed different. Not only did the dynamic change, but the atmosphere too. “This year it felt like club rush was more active, in a way, with more freshmen participating,” said senior Mavi Verde, president of Asian Club.

The 12 new clubs weren’t primarily based on academics, similar to last year’s clubs, but introduced diversity that gave students an opportunity to explore each community. This brought an excitement out of Clark students as they weren’t resorted to pick clubs based on their academic club, but based on their creative sides. With addictive chants and attractive incentives, the setting gave freshmen a larger variety of clubs to choose from compared to last year. “When I saw the lines piling up with more and more students down at the amphitheater, it just gave me this sensation to participate in club rush,” said freshmen Christine Nguyen.