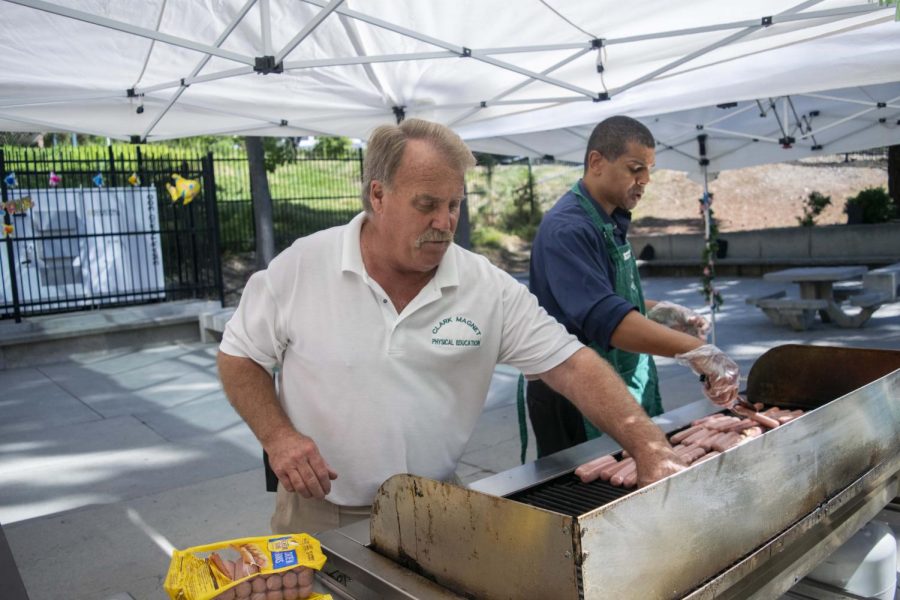 Mr. Axelgard and Mr. Pruitt prepare for the senior barbeque.

On a blazing Friday morning, the Class of 2019 was released early third period to take the iconic “19” senior panorama photo and later filled the auditeria for a brief info session on their upcoming Catalina Trip. Meanwhile, English teacher Conrad Pruitt and PE teacher Chris Axelgard were grilling hot dogs for the annual senior barbecue.

After sitting through the info session, seniors were released into the patio to enjoy the freshly grilled hot dogs as well as the ice tea and other desserts provided by ASB.

“The food was good, and I especially loved the watermelons,” said senior Mavi Verde. “The senior barbecue was pretty fun because I got to see my friends and the whole barbecue in general just reminded me of the freshman pancake breakfast. I found myself looking for my freshman teachers, forgetting I was a senior now.”

But not only did the senior barbecue mark the beginning of the end of the Class of 2019’s high school career, it also mark a time of reminiscence. September 7 also marked Clark’s first ever “first day of school” 20 years ago (though the actual opening of school was Sept. 8, 1998.).

For ASB supervisor Elaine Snodgress, having both the senior barbecue and Clark’s twentieth anniversary was a once-in-a-blue moon experience. “I

think that it happened to coincide on the day. It was a simultaneous event and there was a lot more effort put into it because there were two events on the same day,” Snodgress said. “Senior barbecue started when Clark first started, so it’s a tradition we don’t want to stop because it’s a time for the seniors to unite for their final year.”

Whether it was 20 years ago or a week ago, Clark’s senior barbecue will always be a rite of passage for the seniors who walked in and out of Clark’s hallways for the past three years and for Verde. “To me, the senior barbecue represented the beginning of the end,” Verde said. “My high school career is coming to end and I’m excited of what waits of me in the future.”