Students blast their bottle rockets into the sky 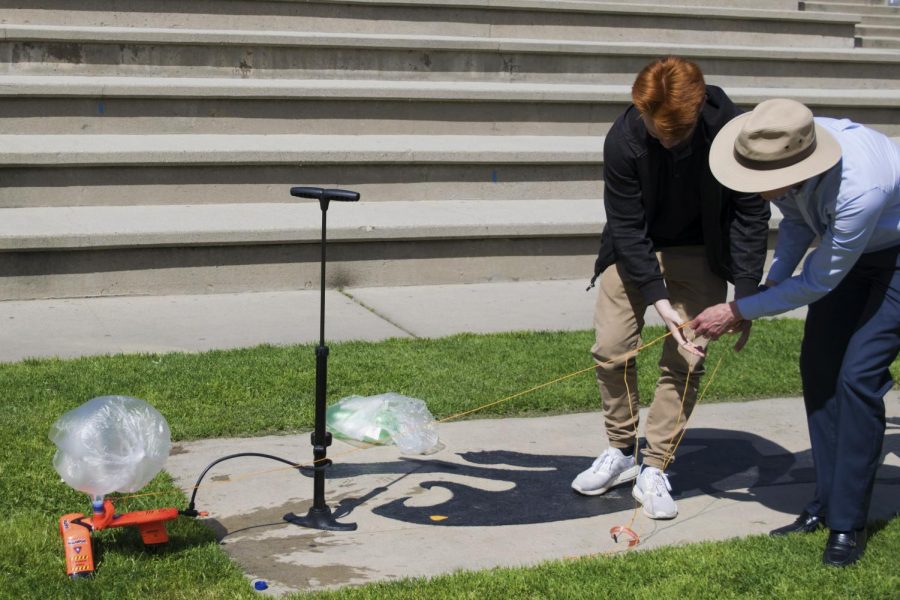 With a quick pull of the cord, the rocket shot up into the air with a pop and everyone craned their necks to see how far it would go. Ten students gathered around as physics teacher Gerald Gruss’s Engineering Club launched their bottle rockets on April 10. While still in the classroom, Gruss explained how the rockets would be launched, needing just enough water to be pressurized and push off the ground. Students filled their soda bottle rockets that they had made weeks before, awaiting the day they would finally get to shoot them into the sky.

“I think we’re going to need about a quarter of a bottle of water,” said junior Narek Nazaryan. “There needs to be enough liquid and gas to push it off of the ground.”

As the students walked down the stairs to the grass, Gruss explained how they would skewer an Aqua Pod to the grass and put the bottle on top.

The time came for the first student to launch their rockets. The students watched as Nazaryan walked up to attach his rocket to the Aqua Pod. Excited whispers filled the air as Nazaryan began to pump gas into his rocket, making the water at the bottom bubble.

A thin spray of water came out of the bottle, signaling that it was time to pull the release cord. Gruss told everyone step ten paces back, as no one knew how the first launch was going to go. Silence overtook the students as Nazaryan reached for the release cord.

The rocket went up about 30 feet and then quickly fell to the ground.The creators ran to their invention and went to fill it up with water to launch it again.

The rest of the groups went, pumping up their rockets and shooting them up in the sky. The built in parachutes in the rockets didn’t deploy on any of the students’ rockets. “I’m not completely happy with the results,” said sophomore Ernie Villalta. “The parachute we made didn’t deploy but the whole experience was cool. It was fun.”

Students who had stayed to watch the rocket launch were blown away. “Most of the rockets were extremely well built,” said junior Marat Mustafaev. “I really liked watching them shoot up at such speed with the water spraying everywhere. It was really a fun experience.”