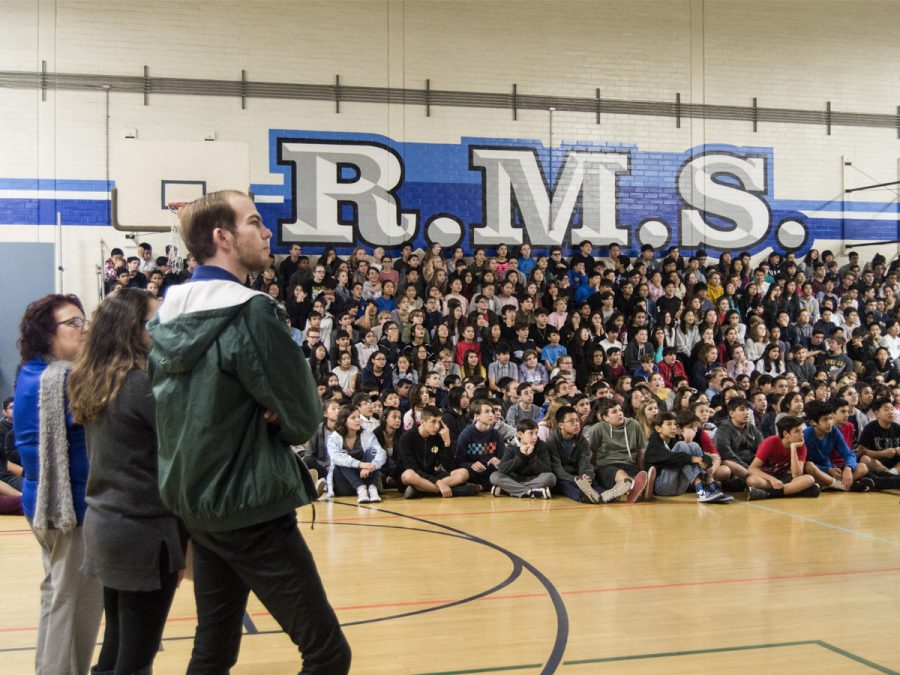 Teacher Eric Kursinski looks upon a group of Rosemont Middle school 8th graders during the presentation.

The rising dawn of January may seem like a dreaded, pessimistic time for most students. It marks the start of the second semester, as well as the resuming of school life. But for Clark’s administrative team, it marked a time of both hope and opportunity as Clark Magnet embarked on its annual recruitment tour in middle schools all around the Glendale Unified School District.

For about two weeks in January, Principal Lena Kortoshian, Assistant Principal Armine Mkrtchian, senior project coordinator Narine Tatevosian, and some teacher and students visited all four GUSD middle schools in order to encourage incoming freshmen to apply to Clark’s lottery system. “Because we are a self-electing school that’s lottery based, it’s so important to get the word out about Clark,” Mkrtchian said.

Along with administration, several of the CTE Tech Lit teachers and students left in the morning to recruit eighth graders throughout several middle schools. Cinematography teacher Matt Stroup, along with the administrative team, shared a Powerpoint presentation that showcased Clark’s expertise in technology as well as the sciences and also included short videos of teachers talking about their classes.

AP US History and photography teacher Eric Kursinski and English teacher Narine Tatevosian each gave a brief speech on life at Clark and what new students can do throughout their high school careers. The presentation ended with the first-hand experiences and words of guidance from current students.

One of those students, sophomore Josie Arm, said she felt honored to come represent the school she loves. “I wanted the middle schoolers to know that they will find something of their interest through of the many opportunities at Clark.” Arm said.

Along with the student presentations, Clark also held a parent’s night at each middle school for parents interested in their children attending. Both parents and students were given the opportunity to learn more about Clark as well as being encouraged to apply. For Mkrtchian, Clark recruitment just keeps on getting better. “I think it was more successful because we added a parent night at Rosemont and changed the presentations a bit,” she said. “It’s always changing every year, but in the end, we just want more students to come to Clark and receive the opportunities here.”