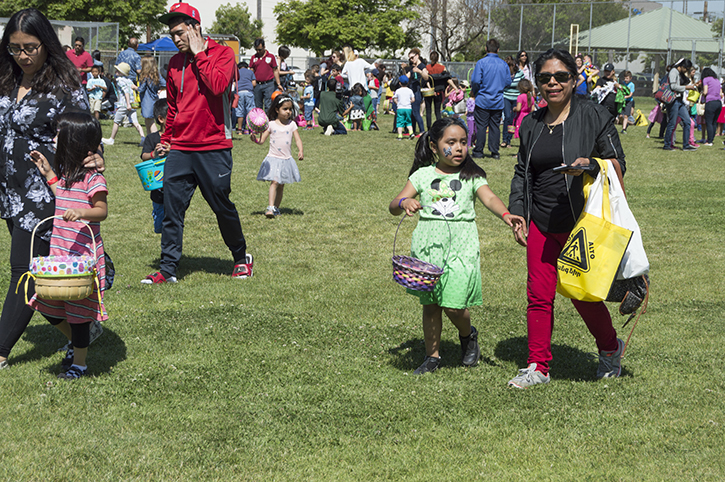 “It is such an amazing thing that the city hosts events like this because not everyone gets to celebrate Easter,” said one parent about the Spring Eggstravaganza, an event hosted by Pacific Park & Community Center to celebrate Easter. The Easter celebration was an ideal event for children ages 2 to 12 that lasted from 10 a.m. until noon. “It’s a great way to bring families together and for our children to meet other kids their age to build new friendships,” she said.

The celebration was free and open to the public. All the attendees had to do was bring their own basket. Adult volunteers set up information booths and ticket booths where they gave out free wristbands to the kids. Booths for carnival games such as the mini hoops game and tin can toss were also set up as well. And despite the heat of a Saturday morning, it did not stop any of the kids from running around the park squealing for the bunnies and eggs.

A small bouncy house stood by the front of the park where face-painted little kids eagerly waited for their turn to enter. Other than the bouncy house, there was also a climbing wall that was meant only for kids. Parents stood around the railing of the round climbing wall as they film their kids successfully climb their way up to the very top. However, some kids chose to participate in the carnival games and win candy and chocolate prizes. 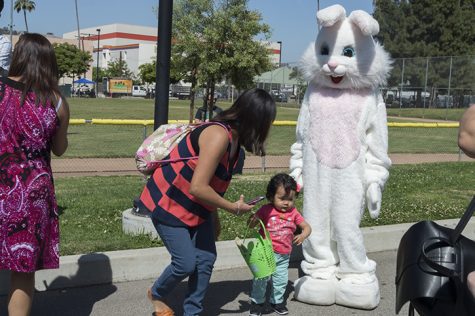 And with every Easter celebration, the egg hunt is the most looked forward to event. Parents and kids lined up outside the baseball field as the volunteers throw plastic eggs on the ground for the kids to collect once the hunt begins. Kids from ages 2 to 6 were given the opportunity to have the first round while kids from ages 7 to 10 were given the second round.

While the participants await in the line, an easter bunny mascot made an appearance which caught the attention of many kids and soon enough, the bunny was being swarmed by little kids squealing for a picture. Clark junior Natella Muradyan volunteered to help with the mascot and picture taking. “I had to walk with the easter bunny mascot to make sure that it was safe and nobody would figure out who’s inside it,” Muradyan said.

When the time came for the hunt to begin, parents and kids were let to enter and stand around the field to await for the go signal of the bunny to start hunting. The rule was to look for the egg with the gold coin inside, and not the silver, nor the blue coin. When the bunny gave the signal, kids did not bother to wait for their parents to catch up with them as they started running and putting eggs in their basket.

One lucky kid who got the gold coin celebrated his success by making a “snow-angel” on the grass field while shouting “I won! I won!” several times. “I am really really happy, this is the best day ever,” said the child.