Halloween costume contest is something to remember 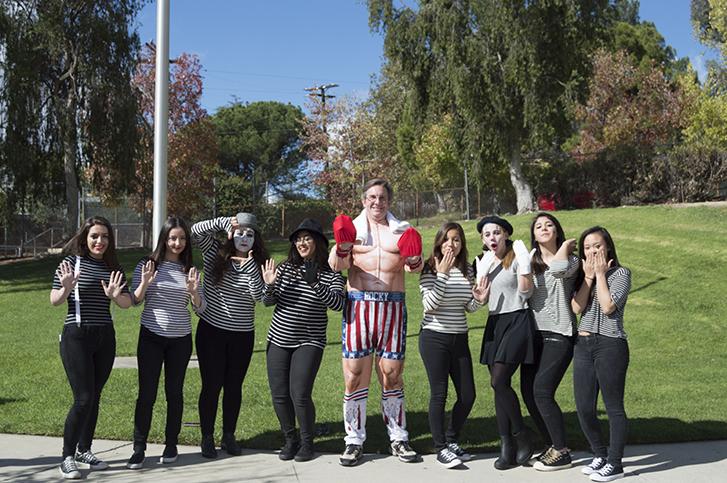 Instead of having the Monday blues as usual, Clark students welcomed the day with high spirits in their Halloween costumes that ranged from very elaborate to I-pulled-this-off-in-five-minutes. ASB officer Mariam Panikyan started off the lunch event with calling off the names of the participants which drew many of the students’ attention, and soon enough the amphitheater was filled with people waiting for the participants to show off their costumes.

Treats had been given to the participants beforehand and once each of them was called to model their costumes, the audience was already applauding and shouting for their fellow classmates. students dressed as soldiers in the Army, two seniors came dressed as Mexican priests and a junior who wore a tight, full-body green bodysuit.

One participant, junior Aram Amiryan, who wore a blue inflatable suit and called himself “Mr. Blueberry,” showed off his dancing skills when he was called, which earned him the shouts of encouragement from the audience. When asked about how he felt for coming in first place for the contest, junior Shant Atamyan’s only response was, “God bless,” which fit with his priest costume.

“I liked how this year there were more participants, there were more creative costumes, and people decided to do group costumes which I thought was cool,” said junior Nareh Agakhanyan. And true to her words, a group consisting of five girls came dressed as the Grease’s Pink Ladies. Agakhanyan said that she liked the fact that there were a variety of costumes and not everybody wanted to conform with what people are doing. 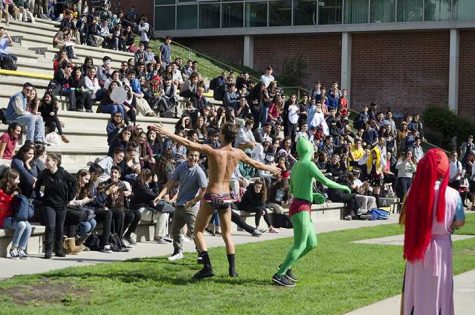 And nonconformity it was for at least one student. Junior Nicholas Schmit, a GHS water polo athlete, captured attention when he took off his robe and ran down the steps of the amphitheater in nothing but his water polo swimsuit while raising his arms up and nodding like a winner.

He was then met with open arms at the bottom of the amphitheater by contest participant junior Daniel Solakian, a participant and friend, where they both embraced.

Students shouted, clapped and captured photos and videos with their phones. “I was just showing Glendale pride,” Schmitt said. This daring occurrence was the talk of everyone after the contest had ended, as this was not something that had happened in prior years. “Nick stripping was the highlight of the contest,” said junior Saril Nishan.