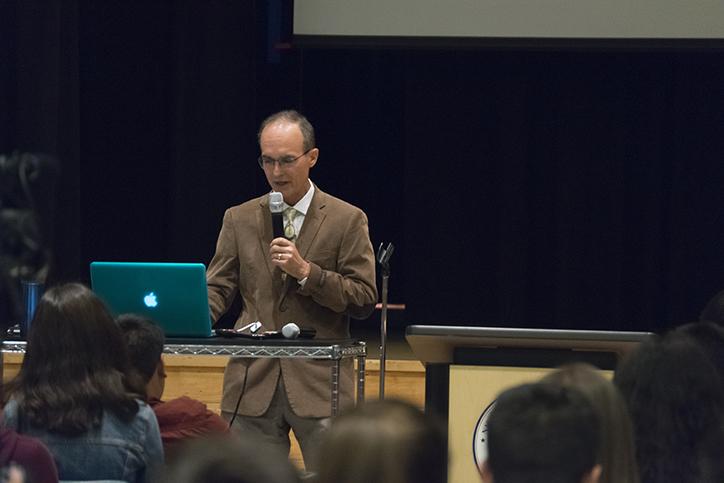 Mr. Blattner introducing the guest speakers in the beginning of the assembly.

A Canadian and a Google employee were the center of attention at the Oct. 13 assembly honoring Ada Lovelace, “The Enchantress of Numbers.” Teacher Fred Blattner, who hosted the event, greeted around 200 students as they filed into the auditeria and told them of a “special Google Classroom” that would be used to “post questions for the speakers.”

As students settled down, many of Clark’s staff, including Principal Lena Kortoshian, came to see this special event. “It is Ada Lovelace Day and we’re celebrating women in STEM,” Blattner began as the cinematography students started filming. Blattner started off his presentation with a clip about the woman of the hour  —Ada Lovelace— that glorified the world’s first computer programmer. He then introduced the first guest speaker, Lucy Abramyan, who graduated Clark in 2004.

Abramyan began with the fact that she was dyslexic and had still managed to reach great heights in her career. “Math isn’t just about numbers and allows us to model abstract concepts of the universe,” Abramyan said. She continued to discuss her time at Clark and how she “wanted to become a programmer because of Mr. Blattner’s programming class.”

She connected with the audience through tales of her experiences and even bringing up an anecdote about her AP Chemistry class with teacher, Loussik Kassakhian.

“A senior told me the chemistry teachers were the hardest so I took it in the summer.I ended up taking the AP course at Clark and continued to take more in college,” she said. She had even been a part of Clark’s 696 Robotics team.

The students listened as Abramyan discussed her accomplishments, including her work with the Jet Propulsion Laboratory and at Google. She is currently working with Google on virtual reality. Abramyan has also worked on the Mars Curiosity Rover and “used virtual reality to control robots on the moon.”

She really told the audience about how few young women there were in STEM fields during her experience at Harvey Mudd College. In her junior year at HMC, she was “the only girl out of 14 boys” in one of the most difficult classes in the institute. However, she proved herself successful as her professor deemed her “the smartest student” in the class.

“I want to study theoretical particle physics. Are there any career opportunities at JPL?” asked junior Luca Scharrer through Google Classroom. Abramyan said there was and finished off her presentation with telling the students that they “shouldn’t be afraid” and that they were “not the worst ones.” The following guest speaker after Abramyan was a Chemistry and Algebra 2 teacher at Crescenta Valley High School named Kiran Gill. Gill is actually a chemical engineer who moved to Glendale a year ago to teach.

Gill worked as a compression intern and production engineer with BP Canada Energy Company. “I was never an intuitive engineer from the beginning,” she said.

Although Gill had less time to present than Abramyan, she managed to share her experiences with being an intern at BP. Gill encouraged the females of the audience to answer her questions, joking that she was a teacher and therefore was inclined to keep questioning her audience.

She proceeded to explain that compressing natural gas meant “reducing volume so the pressure increases to keep gas flowing.” Gill closed up her presentation with a clip from Ted Talks by Reshma Saujani who is a strong advocate in encouraging women to join STEM. “Don’t aspire to be perfect,” said Gill as the audience applauded her for her inspiring presentation. She emphasized how the girls especially should not let perfectionism keep them from achieving their goals.

“They’re both so intelligent and motivating. It’s so great that Clark did this,” said junior Manuel Sardaryan after the speeches. Following the conclusion of the presentation, the students were not the only ones with questions. “Kiran, what do you miss most about Canada?” said Blattner as students giggled at the unrelated question. Gill replied with missing the snow, air and quietness of her hometown.

Health teacher Breanna Hutchinson also asked both guest speakers about advice for newer generations of high school students and what career paths will be growing in the next few years. Gill told the audience that “software and environmental engineering” would be experiencing a huge growth, and Abramyan added that biotechnology would also be expanding.

Junior Lousine Aslanyan felt inspired like many of the others in the room. “I hope that girls wanting to go into STEM fields really took something positive from this assembly,” Aslanyan said.