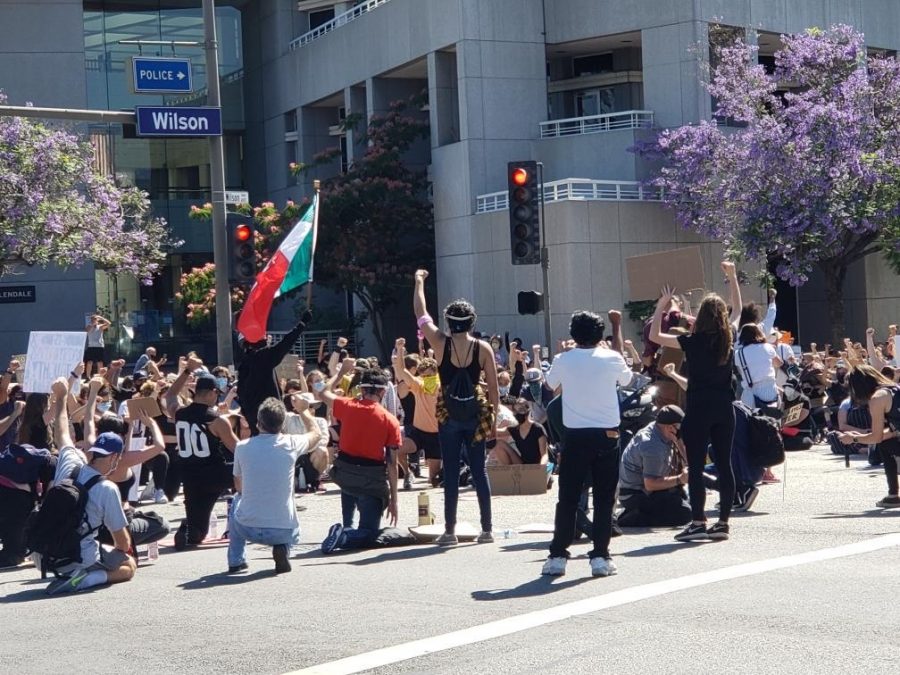 In light of the recent events involving the wrongful in-custody death of George Floyd at the hands of a white policeman, the demand for change in America and its system of racism has rightly surged. Protests and calls for reforms on social media have all pointed towards a desire to change and progress.

Even in the normally quiet city of Glendale, a place I have lived in all my life, a yearning for change has brewed and, for some, a sentiment to take action has been strengthening. Glendale has been known to be a place where protests or any public demand for change rarely happen. Little did I know the call for action in response to the recent killing of George Floyd for me would hit so close to home. Change would come in the form of my friends.

It all began as a harmless idea on the group chat a few days after news of Floyd’s death reached national headlines. A simple, peaceful protest down to Glendale City Hall to rally the community to support the black community in their struggle and acknowledge the injustices laid against them. It was an ambitious plan, but so many questions aroused. How were we going to do this? How could we pull this off within a few days? What about the police? How would they react? Who would even come to support the protest?

Most of all, we were just a small group of local high school students stuck in quarantine, most of us not even 18 yet. What could we do to help instigate change? “I was doubtful the entire time,” said Clark senior Ava Garcia. “I just kept thinking ‘oh Jesus I really hope we don’t mess this up’, but we really worked hard and I think we came up with something that will make an impact.” But in an ironic turn of events, what was once considered our greatest weakness turned out to be one of our greatest strengths. I realized youth and new energy are things America truly needs to propel change.

Using the limitless power of social media, what was once a faraway idea quickly became a true reality. “There was a lot going behind the scenes for us, from designing the flyers to connecting with community leaders to organizing our volunteers and acquiring supplies,” said senior Gabrielle Scott, another one of the main organizers of the protest and perhaps the face of the whole march itself. “We (the organizers) were in constant communication with each other, going over every minute detail of what was happening on Sunday.”

Next thing everyone knew, the police and local government leaders were asking for contacts, word was spreading like wildfire and even the local newspaper asked for interviews. Numerous organizations provided support as well like the YWCA, Black in Glendale, the Armenian National Committee, the Glendale News-Press and the local Glendale Methodist Church. All of them somehow got in contact with my friends and were able to give vital resources like water stations or showed solidarity on social media. One lady even assigned them some “homework”: a documentary series detailing the history of nonviolent protests and how they were successfully used to spur change around the world.

At the time this article was written, the official Instagram account for the march (@glendalemarchforblacklives) has over a thousand followers and counting, quite a feat to achieve given the short amount of time it has existed. But while so many people showcased support, just as many displayed their concerns.

“We had a lot of critics,” Garcia said. “People didn’t like that we told the police about our protest, others didn’t like our original route, and some people were just upset we were going to try and have one at all.” Garcia said that there were even some people who posted on social media telling their followers to not attend the march due to some of the decisions the organizers had made.

The amount of disagree

ment was something expected, and although it was rough to swallow those pills, I began to see a new light flicker within my friends’ eyes when we’d talked. It was a relentless, dogmatic fire, one that would not back down from all the noise. Seeing that relentless spirit in them, as well as myself, made me realize things were never going to be the same.

The idea that change does not have an age requirement was something I never truly believed in until I was a part of it. The power to impact is a doable feat that only comes to those who truly desire to progress the society they live in. In short, we can all do something to help out. Although many people were not able to attend due to fears of COVID-19, they were still able to fuel the movement by dropping off resources, voicing their support on social media or even donating to the organizations in need.

Some people volunteered as medics or even offered to pay the bail of any protester who might’ve been arrested.

On the day of the protest, June 7, about 1,500 people attended (when only 500 were expected to come) and marched down to City Hall to later attend a separate vigil in honor of George Floyd and the countless other black lives lost in the hands of wrongful police brutality. “On the big day, everything just fell into place,” Scott said. “More people volunteered to lead chants, more medics came, more people set up mini water stations to keep the protestors hydrated. Everyone there was so eager to help and make sure that this protest was safe for us and meaningful for the community as a whole.”

Numerous speakers came as well, including local African American community leaders who discussed the importance of protests like this and pushed for a new resolve to bring change in Glendale, a city that was once a hub for the American Nazi Party as well as once being historically anti-black. Scott even delivered a powerful speech herself.

“I think I was a little bit on autopilot [during the speech],” she said. “I wasn’t thinking because if I had truly grasped the enormity of the crowd I was speaking to in that moment, I probably wouldn’t have been able to do it.” Although she was a little nervous, Scott said that the importance of the message was what ultimately provided her the courage to say something. “I believe the gravity of the occasion was important,” Scott said. “The message we wanted to share was important. That’s what kept me calm and grounded while I was speaking.”

Also included was a symbolic, but extremely powerful moment of silence that lasted exactly eight minutes and forty-six seconds, the same amount of time Floyd was put under that deadly chokehold that cost him his life. No arrests were made and the protest was considered a huge success in terms of the locals showing their support for the black community. While a small group of my friends organized the march, it took the whole community to make it truly what it was, and seeing that show of support is something I’ll never forget.

By having a small role in the genesis of this protest and being a first-hand witness to change right in my hometown, I now have a little more hope that change is imminent. While there may have been some division within my city, there seems to be so much more unity and strength within the same cause.

Every voice matters and every voice holds the power to create a movement. “What I learned from leading this protest is that I have a voice and it’s very important for me to use that voice to the best of my abilities,” Garcia said. “I used to think it was something powerful but it really is. It just takes one voice to make something happen.”