My experience with a popular customized skincare company proves disappointing 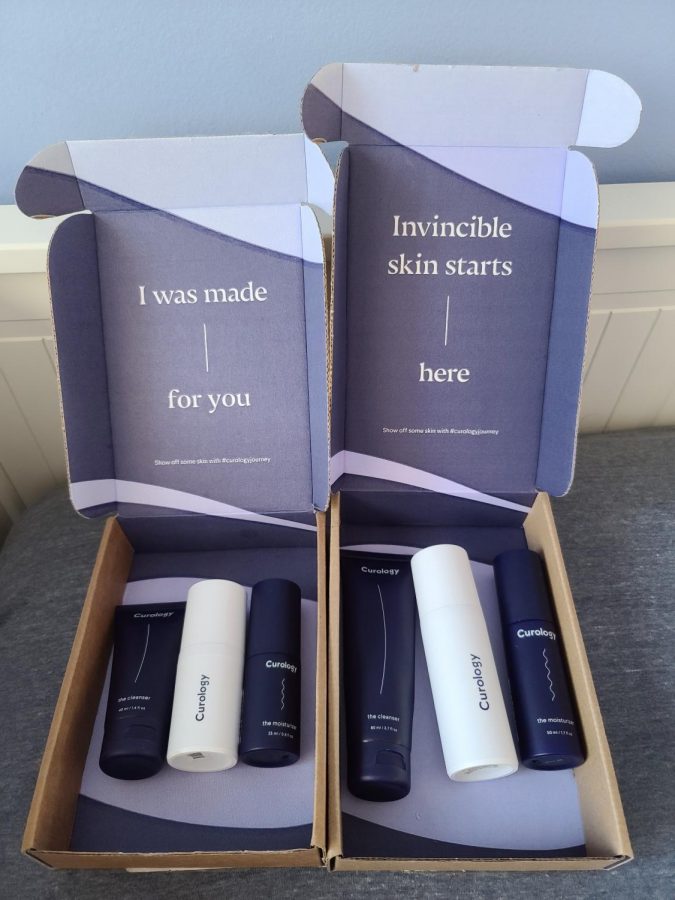 Inside each Curology box is a motivational message printed on the top flap.

One of my New Year’s resolutions for 2019 was to take better care of my skin, especially my face. Like the majority of teenagers, I have mild to moderate acne, and it somewhat skews my self-esteem. When washing my face with a cleanser every day, applying moisturizer, and using sunscreen on sunny days wasn’t enough to achieve clear skin, I turned to something different.

After seeing an advertisement for a free one-month Curology trial, I began considering ordering it. This wasn’t my first time hearing about this product, though. One of my close friends had been using it and seeing results, and I had also seen several social media posts and influencers recommend it. Of course, a significant amount of these were a result of paid promotion, but the before and after pictures from Curology users looked promising.

In the U.S., people spend over one billion dollars annually on acne treatment. Of that figure, $100 million is spent on non-prescription acne products. Needless to say, this is an issue for millions of people. The numbers suggest that over-the-counter acne products are a less popular market than prescribed treatment. However, I imagine that non-prescribed acne treatment will become more widespread as they become more accessible. $19.95 a month for Curology sounded like a great start.

My best friend of several years let me in on what her journey with this product was like. “Curology was basically my last resort,” said Ani Kemdjian, a junior at Hoover High School. “I had been following a good routine and even visited a dermatologist for a few months and wasn’t seeing any change. But after using Curology, most of my acne cleared up.” However, Kemdjian found that the results did not last. “In the beginning, I saw great progress, but then I suddenly started breaking out again out of nowhere,” she said. She expects to end her subscription of almost two years.

Only slightly deterred and not expecting to use Curology for longer than a couple of months, I headed to their website. The application process was simple. I answered a few quick questions regarding the problems I wanted to target in my skin and some basic questions about my health such as potential allergens. Then, I was prompted to provide pictures from my front and side profiles and upload them to the site. I snapped those three photos and sent them. I had never taken such unfiltered and close-up pictures of my face, and admittedly, I did not like what I saw. This made me more eager to begin treatment.

My custom formula contained three specialized ingredients: azelaic acid, clindamycin, and zinc pyrithione. The information on the website claimed that the 2% azelaic acid was aimed at unclogging pores, improving skin texture and lightening dark spots. This sounded like a miraculous, all-in-one material and it assured me that my problem areas were being targeted. The 1% clindamycin acted as an antibacterial that fights inflammation and acne-causing bacteria, and the 0.25% zinc pyrithione was an antimicrobial material that tackles acne-causing fungi and bacteria.

Feeling confident but still seeking further information, I researched these ingredients. I found that clindamycin and zinc pyrithione have alternate uses. Clindamycin can be used to stop bacterial growth in the lungs, blood and internal organs, and zinc pyrithione is effective against eczema and psoriasis. Also, the most prominent use of zinc pyrithione is in anti-dandruff products. This information was definitely surprising to me, but it made me feel better that real medical ingredients were going into the formula, even if they served more than one purpose.

As for efficacy regarding acne treatment, I found that the ingredients in my formula had long been tested and proven successful in treating acne. Azelaic acid is considered an effective treatment for acne vulgaris. However, the percentages normally used are between 10% and 20%, which is significantly more potent than the 2% in my formula. Clindamycin was similarly helpful in reducing the severity and appearance of acne, and it is found that 1% clindamycin was capable of achieving these effects. Zinc pyrithione seemed to be the least popular of the three drugs, as I could not find many sources pertaining to its benefit to the skin, though it has multitudes of other uses in dermatology.

My trial Curology set arrived on Jan. 4. I was elated when I heard it arrive at my door. I liked the minimalistic packaging, which was just a plain, brown cardboard box with “Curology” printed on it in white. Inside, there was a sheet of the recommended Curology routine and a plastic bag that included a Curology cleanser, moisturizer, and of course, the white bottle with my custom formula. All three of these items were the smaller size of what Curology offers, which is meant to last one month. After my supply ran out in the expected time, I ordered the larger package on Feb. 3, which equipped me with two month’s worth of product. My experiment with Curology lasted a total of three months.

Besides using Curology, I adopted a couple of new habits in these three months in hopes of helping my skin as much as I could. I began letting my face air-dry after washing it instead of wiping or patting it with a towel in order to reduce tugging and pulling of the skin. I had heard that this is a good practice to prevent wrinkles, as well as eliminating the possibility of transferring any bacteria from the towel to the face. I also tried to lightly massage my face as I applied the Curology moisturizer, since I had heard it could be beneficial toward skin health.

At some point in my journey, the thought occurred to me to ask my mom how she dealt with acne when she was a teenager. She told me that my routine is considerably more complex than hers was. When she was a teenager in Iran, the most specialized skin products that were available to her were basic face washes and some oil-reducing cleansers. “I had a face wash that had sulfur in it, and I used that to lessen the oil on my face which helped with acne,” my mom said. I had never heard of sulfur as an acne-fighting ingredient, but a quick Google search backed my mom’s claim. The existence of a service that delivered acne-care products to our doorstep was a foreign concept to her.

My main problem before Curology was excessive and unnecessary contact with my skin. I was no stranger to messing with my pimples, even absent-mindedly. It was an easy enough habit to kick, and I credit my restraint from touching my face for the healing of my skin.

With everything said and done, my results were…disappointing. I still had several noticeable blemishes and even new pimples and acne marks. There was a slight decrease in the small bumps on the sides of my face, but nothing ground-breaking.The biggest difference was that two pimples that I had before had healed.

Again, I do not believe this was a result of using Curology but rather of time and allowing the skin to repair itself. If anything, the biggest benefits were the cleanser and moisturizer, which I felt were hydrating and non-irritating to the skin.

My skin did look smoother overall and more glowy, so I wouldn’t say Curology doesn’t work or worsens acne. Maybe my expectations were too high. I don’t doubt the potential this product has for some users, and I had fun doing my own experiment.