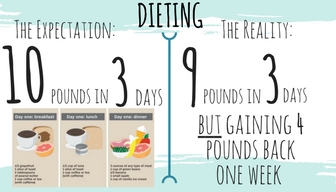 Lyanna Babakhanian, a sophomore at Clark Magnet High, tried the Military Diet and had interesting results. “I lost about seven pounds by following the Military Diet, and it really did help lose the weight. But the only problem was that it made no difference in appearance. Also, the weight I lost was less than what they said would be lost,” Babakhanian said. “I did it for fun since everyone was trying it, but I would not recommend it for people who are actually trying to lose weight.”

The Military Diet — a name you would only consider to be used in the Army. However, the Military Diet is a new technique used to help regular people lose weight. Over the years, people have used this “Military Diet” to lose about ten pounds in three days. This trend developed when people realized how fit people in the military are.

Hoover High School sophomore Mineh Tilmi, an experienced dancer, also tried the Military Diet, and she said that this diet did help. Tilmi has been dancing for over 12 years, and she has tried many diets, but was surprised when the Military Diet was effective.

Of course, for Tilmi the diet was accompanied by many hours of dance.

“I’ve tried several diets, and the Military Diet was the only one with a positive outcome,” Tilmi said. “I tried the diet right before a dance competition, and it did show some changes. It mainly changed my appetite and helped me lose 10 pounds, but it was worth it.”

Throughout the three days of the diet plan, you get to eat food which people in the military eat to stay in great shape. Diets like these can help people when they are in desperate need to lose weight. The diet tends to affect people differently due to the fact that some people may also work out in their free time.

“The diet was an overall success for me since I tend to work out on the side. It helped me lose the perfect amount of weight by just eating differently,” said Hoover High School sophomore Emily Hovsepian. “The diet is really just a quick fix and I had a fun time trying out something new for three days. My outcome was different though, since I also workout. I lost more than ten pounds.”

As a dancer myself, this diet was one that was fitting. It was the week before a dance concert and I told myself that I had to try something new. I knew that it might not have worked, but I was willing to try. And from the results I’d heard from friends, the Military Diet seemed right.

While I was looking at the ingredients and food that I needed to buy to prepare my meal prep, I realized that these foods were basic, everyday meals that were easy to make. Most of the ingredients can be found in the pantry: grapefruit, apples and bananas, whole wheat toast and saltine crackers, canned tuna fish, cottage cheese and hard cheddar cheese, eggs, meat of any kind (including processed meats like hot dogs), green beans, broccoli, carrots, peanut butter, vanilla ice cream, black coffee and water. I then encouraged my aunt to try the diet with me, and the next thing we knew we were at the grocery store picking out the items.

In a recent American Journal of Clinical Nutrition editorial, a team of nutrition researchers concluded that weight loss ultimately comes down to “how much energy (or calories) is consumed as opposed to how often or how regularly one eats.” The Military Diet helps people consume a steady amount of calories, approximately 800-1000 calories daily. (A normal diet consists of 2000+ calories for a health adult.) The Military Diet is broken down into breakfast, lunch, and dinner, and the only liquid that can be consumed is water or black coffee.

Kara Sergile, a nurse at Clark Magnet and Crescenta Valley high schools, said that a well-balanced, nutritionally sound “diet” can be helpful for many people for “initial” weight loss. “I believe we need to move away from short-term ‘diets’, and move towards better education and understanding about food, calories, intake and metabolism, so that individuals can make better life-long choices about their nutrition and healthy weight,” Sergile said. She thinks diets can be good when the are used correctly.

I asked my aunt if she would do the diet with me so we could see two different results. Even though we were doing the diet for fun, my aunt and I couldn’t wait to start the diet the next day. We were both eager to see the outcome. We both had different experiences since I would be working out more than her.

The night before we started the diet, we did meal prep, which consisted of planning out the three days and making the breakfast, lunch and dinners ahead of time. We also weighed ourselves to compare our weight before and after. The first day was the hardest since our bodies were not used to the low intake of calories. We were still hungry after the meals. And the things we were looking forward to were the desserts and fruits.

After each meal, our bodies got used to intake of calories, and so now we just waited to see if the results would be positive. And on the last day, we weighed ourselves, and I had lost more weight than my aunt. My aunt lost about seven pounds while I lost nine. We did not reach the said amount, which was ten pounds. Even though we did not reach out goal of ten pounds, the end of the diet was educational and memorable.

The only bad part about the diet was the beginning, when we had to tolerate being hungry; but, after the first meals, we got used to it. The benefits were that for the next week my aunt and I both had minimal cravings since our body more or less was established on eating less.

In a article by VeryWell Fit, Richard N. Fogoros, MD and Malia Frey stated that even though the Military Diet is healthy, it is only useful for those three days, “But you’re likely to put the weight back on (and possibly gain more) unless you learn to eat portion-controlled, nutritious meals for the long term,” they wrote. The reason the diet works is because of the calorie restriction, and if you balance that calorie count constantly then the results will be positive. But if you don’t keep it constant the weight you gained will most probably come back.

The diet helped me lose nine pounds, but two weeks later when I weighed myself again, I had gain around four pounds back. If the diet is not consistent, then the weight will be gained back easily. Unless a healthier lifestyle is continued, then the weight is easy to get back.