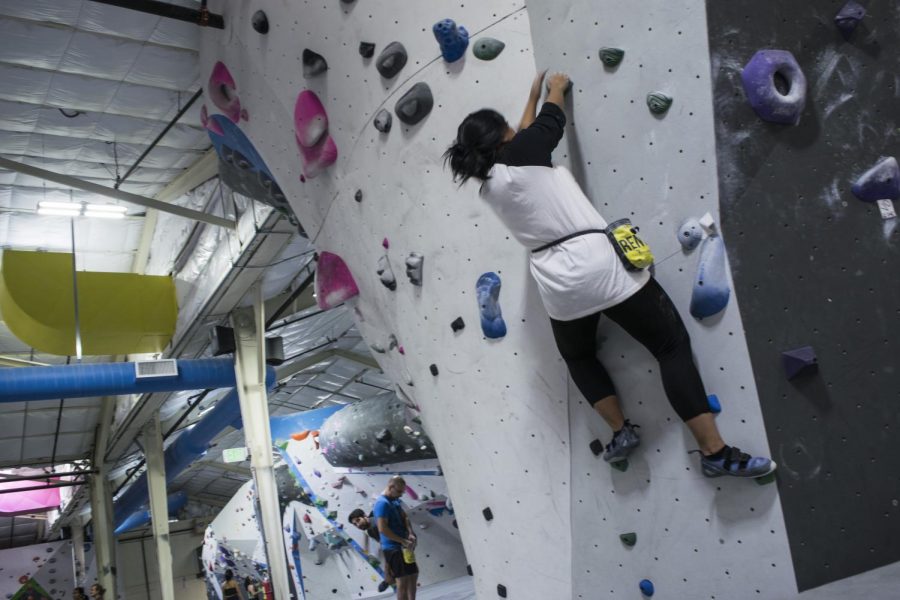 A climber climbs the V1

Going to the gym and working out is never an easy task, especially to those who are not into exercise at all. To many people, including senior Anna Karapetyan, who is a YMCA member, working out can be boring sometimes. “It’s the same routine a lot of days which begins as something fun,” Karapetyan said. “But then you get used to the same thing and it’s not fun anymore.”

However, going to the gym to lift weights to achieve a better fitness level is not the only way for people to be healthy and to get fit. Activities such as aerial yoga, parkour, boxing and barring are ways to also get in the fitness zone.

As someone who has always wanted to scale a tall building because of action films, it was only fitting for me to try an activity that involves climbing. Having thought of that, I came across on my Yelp app several indoor bouldering gyms including Hollywood Boulders.

Swiping through the pictures provided by Hollywood Boulders on their website, I knew right away that I just had to experience it. I then encouraged my cousin to try it with me and in no time we put ourselves into an introductory class for 45 minutes that only cost $30 per person including a whole day pass and climbing gears.

As a matter of fact, more people participated in climbing activities in 2015 than in 2014, according to a report by the Physical Activity Council and PHIT America. Although the participation level only grew by 18,732 people from 2007-2014, the 2014-2015 participation level showed a dramatic increase by 148,287 participants. In addition, bouldering, as well as indoor climbing, placed 70th on the list of 111 activities to do in the U.S. — beating out gymnastics, track and field, and many other traditional sports, which is why it’s no wonder that sports climbing got approved for the 2020 Summer Olympic games.

Not necessarily preparing for the Olympics ourselves, my cousin and I walked into the facility carrying our junk foods. My excitement died down as I scanned the whole place. Almost everyone had bulking muscles and stood at least 5’ 7” and up. I was intimidated and terrified to say the least because of the inkling feeling that I would not be able to do any of the obstacles.

Fortunately, one of the gym staff members, Kevin, told us that he was to be our instructor for the next 45 minutes and we were free to do whatever we please. We were then joined by two other beginners, which was relieving.

Kevin started us off by comparing bouldering and wall-climbing since it is very similar and people tend to think that it is the same thing. Unlike wall-climbing, bouldering does not have any ropes to support the climber from falling. “Wall climbing is safer because you don’t take ground falls,” Kevin said.

In addition, walls for wall climbing are typically high and horizontal while bouldering walls are low and geometrically shaped. “It is essentially comprised of short intense movements over a small course ranging from 12 feet to 17 feet,” Kevin said. However, according to Kevin, although bouldering walls are low, it is still more intense than wall-climbing. “People have issues with their joints, specifically their hands, wrists and shoulders because it’s so intense and they don’t know how to control themselves.” To Kevin, wall-climbing is like endurance running while bouldering is sprint running.

Kevin then informed us about falling and/or jumping technique, which is a very important knowledge to have when climbing since falling from a high wall the wrong way can result in injuries despite the very soft floor mats.

Kevin described two types of falling and/or jumping techniques. The first one was falling on our backs and making sure that our whole body was loose and not tensed up. The second one was more complicated and scary. When jumping or falling from a high wall, Kevin mentioned that most members are worried about hurting their faces, and because of this, they try to break their fall which can result in broken wrists or dislocated shoulders — both of which had happened to some members. “Some members who wear glasses have shattered their glasses by falling,” Kevin said. “But it’s better than breaking or dislocating a body part.”

If climbers start on a certain color, then they can continue climbing by just using the specific color that they started on to make the climb challenging. The labels on the hand grips, officially called the “bouldering grade,” are letter-number grades that determine the difficulty of the climb. The grades starts with V0 and currently goes up until V17. The higher the number is, the harder it is to climb.

Finally, Kevin climbed the wall by starting at a green V0 hand grip and following the green route. When he finished, the four of us beginners took turns with me going last. Kevin made the climbing look so easy and effortless, but when it was finally me who was stepping on the grips, it hit me how difficult bouldering would be.

First, the walls were not constructed to be straight but constructed to imitate a tall mountain, so every wall had steep slopes and sharp corners. Second, the spaces in between grips were far and I only stand at 5’ 2,” which made it harder for me to climb up since it would require more energy and strength. And third, I had long nails which is not advisable at all since climbing can result in broken nails and bleeding fingers.

Experienced members make climbing look like eating a piece of cake, as if they are Spiderman’s relative. But it’s really not. Climbing requires not just whole body strength and endurance, but also good balance since the climber is only stepping on small grips. It’s also typical for the climber’s hand to sweat which is why a powdered chalk is provided to avoid sweating and then slipping. In addition, since the walls are not straight, climbers must keep their body as close as possible to the wall because the farther the body is from the wall, the harder it is to climb since there’s more weight being pulled down from the ground.

Luckily, I was able to do at least V0 and V1, but towards the end of the class at V4, my forearms had given up on me and every time I would try to pull myself up, it felt as if my veins were being pulled apart. “You get stronger and faster but your body is taxed heavily because of the amount of straint that you’re putting,” Kevin said.

At the end of the class, Kevin mentioned that what he noticed with most beginners is the problem of not trusting themselves when climbing because of the fear of falling or not being able to reach a certain grip. Before leaving us, Kevin advised us to just have fun, follow the rules and remember the safety measures to avoid injuries.

Senior Maria Hovakimyan, an experienced climber herself, agrees with Kevin. Hovakimyan, who has been bouldering for almost a year, said that her experience as a beginner climber had also been intimidating, like mine, because of her height and the complex courses. However, with Hovakimyan’s active life playing for GHS’ tennis varsity team, as well as being a part of the Police Explorers Program, it comes as no surprise that she would find indoor bouldering another challenge to achieve despite the intimidation of it.

“I’m very athletic, but I still struggled a little on my first time climbing since I had to familiarize myself with different types of hand grips, while at the same time trying to improve my flexibility,” Hovakimyan said. “It’s still worth it, though, because it really helps with your body, mind, and discipline.”