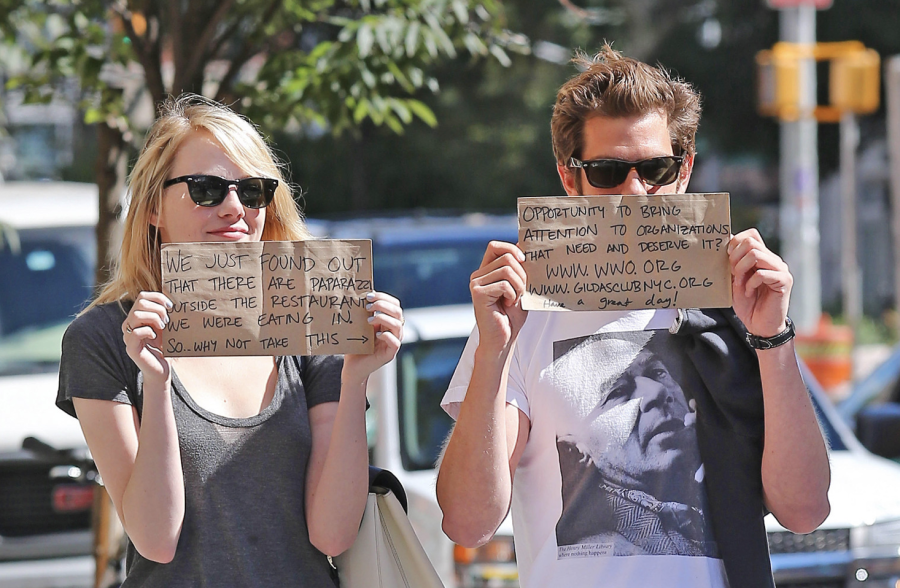 When faced with the paparazzi, the Amazing Spider-Man stars Andrew Garfield and Emma Stone bring awareness to organizations in need.

In a world where the youth glamorizes and idolizes celebrities, the idea of a perfect life is conjured up in one’s mind. Being famous is an aspiration held by many, some sort of unreal dream that people wish for upon the stars. Yet with all the positive aspects of the constant spotlight, there come negative consequences. Celebrities face abuse on a daily basis, but what is more terrifying is that it is normalized.

The paparazzi have heavily contributed to the abuse they face as being considered a norm. Various celebrities have spoken constantly about their lack of privacy but are not taken seriously enough. Friends star Jennifer Aniston had her clash with the paparazzi when she sued British tabloids in 2002 for publishing images of her sunbathing in her backyard. There is a fine line between admiration and stalking, which the paparazzi crosses repeatedly.

In 2017, actor George Clooney took a photographer to court for climbing up a tree to snap a photo of his twin children. Many well-known individuals from Hollywood such as Jennifer Garner have strived for their children to be protected from such instances. She has come across horrors because of the paparazzi and it has impacted her family severely, ultimately leading her to take action. With a group of celebrity parents, she demanded it to be considered a crime for children of celebrities to be photographed with no consent in 2013.

Whether celebrities call for action or not, this issue of lack of privacy solely remains upon society. “Celebrities are given so much attention on a daily basis that there has to be a line drawn between when it is appropriate or not,” junior Nicole Parsegian said. “It all comes down to morals, but there is no necessity for it.”

Not only do celebrities struggle with the paparazzi, but social media aids in their misery as well. Many have spoken up about the constant hate they are receiving, which may come in the form of death threats. In 2011, American singer Selena Gomez received a countless number of death threats from fans of her then-boyfriend, Canadian singer Justin Bieber. When she was on a trip to Hawaii, Gomez was pictured kissing Bieber, which stirred anger from his fans. “If Selena Gomez breaks Justin Bieber’s heart, I will break her face, I will kill her without kindness,” a fan said.

Receiving hate online is an occurrence that happens in the lives of everyday people, but celebrities face this issue more commonly than others. When living your life as a famous individual, running away from attention is not an option. Or can it be? The closest thing to escaping the spotlight is moving away from the center of it, Los Angeles. One of Hollywood’s most famous celebrity couples — Deadpool star Ryan Reynolds and Blake Lively — decided to move to the town of Bedford, N.Y., for their children to have a “normal” upbringing.

A normal life is something anyone who is in the public eye would dream of having. One would think that all celebrities relish in their fame, but it is far from true. It may be a “burden” as it is for American actor Harrison Ford. “There’s nothing good about being famous. You always think, ‘If I’m successful, then I’ll have opportunities’. You never figure the cost of fame will be a total loss of privacy. That’s incalculable,” Ford said to news agency WENN in 2010.

“I think that everyone in the world deserves privacy, regardless if they’re a celebrity or not,” junior Anushik Mkrtchyan said. “Some celebrities didn’t even choose to become famous, it was brought upon them and they couldn’t control it. Some wish to have a normal life and not have paparazzi following them everywhere they go.”

Junior Sascha Shamirian believes it is the price that famous individuals pay for the attention they receive. “Out of the billions of humans in this world, only a handful can have others willing to do anything for something as simple as a picture or an autograph, which should be considered a privilege,” Shamirian said. “Fame is like a gift and those that choose to have all eyes on them should know that every gift comes with a price tag.”

Society’s actions towards those with fame can be far from tolerable, but anyone can make a difference. For one, think before you post. Before sending a hateful message, consider the impact it will have. After all, celebrities are human, too.