What Motivates Teenagers to Do Well Academically? 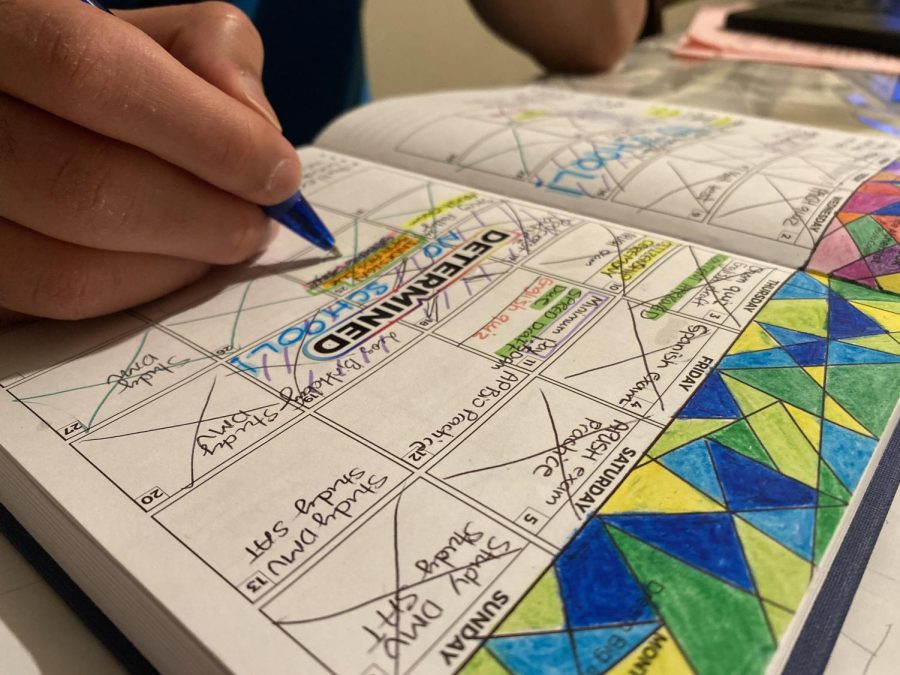 Freshmen student Arin Tahmasian utilizes his planner in order to motivate himself to do well academically.

From an early age, teenagers are told the importance of earning good grades and being successful in life —but what motivational factors actually help teenagers do well academically?

“What my parents told me about being successful in life, is to avoid some of the struggles that they have experienced or have seen others experience,” said freshman Arin Tahmasian. Tahmasian has his parents to motivate him, since he would like to get into a good college and be able to have a successful career in the future. He explains that the motivation from his parents allows him to strive for academic success.

To achieve academic success, junior Lauren Chang pressures herself into getting her school work done; while the pressure works for her it may not work on others. “Knowing that I want good grades really badly and have to work for it is always what gets me to do what I need to do in school,” said Chang. However, Chang’s methods could lead to unhealthy coping mechanisms and an overwhelming amount of stress.

Chang also motivates herself by writing down all her assignments in a planner. “This has always been my main tactic for motivation, as writing in the planner is a constant reminder throughout the day that something needs to be done.” For Chang, having a planner and being able to write down her assignments allows her to visually see what she needs to get done.

To strive and do well in the present, a method that motives Senior Sabrina Spatny is thinking ahead and believing that all her hard work will help her future-self. “I know I am studying and completing my work for someone. I am doing it for my future: for college, for my career, for stability, and for future happiness and relief,” said Spatny.

Similarly, with hard-work and determination in mind, junior Winnie Ann Masaoy thinks about the future as her way of motivation. “Every time I find procrastination tempting me, I just think to myself: ‘Just do yourself a favor. Your future self will appreciate it.’ It goes in hand with taking care of myself—prioritizing what’s good for me in the present and the future.”

Both Masaoy and Spatny are thinking ahead of themselves for the future because they both want to get into a good college, have a stable career, and be able to acquire that future happiness through the present actions.

Although motivational factors’ strives students to do well academically, there are some distractions that interfere with academic success.

“Right now, college applications are distracting me,” said Spatny. “I am going to finish my college applications by the end of Thanksgiving break, so as to not distract me from my school work anymore past that.” The beginning of the first semester is usually a stressful time for seniors because of college applications and rigorous classes. However, Spatny is determined to finish them so she would not have to worry about them later and would balance her other responsibilities.

According to News Gallup, several teenagers took a survey regarding what motivates them to do well academically. About 67 percent of teenagers said self-motivation works on them, while 32 percent of teens said that someone else has to motivate and encourage them to do well. Looking deeper into the percentages, teenagers are striving and determined to achieve academic validation and success. Most of the time, it would be for themselves, their parents, and for their future.

A motivational factor that would help teenagers would be to encourage them on their effort, rather than what their performance and outcome will be.

The majority of teenagers’ lives have motivational factors, pressure, and distractions on themselves because they want to live up to high expectations; being in school they expect to earn good grades, get into a prestigious university, and have a stable job. However, with the pressure, teenagers strive to do well academically and also try to relax whenever they can. Hard work does pay off in the end and success will be theirs for the taking.