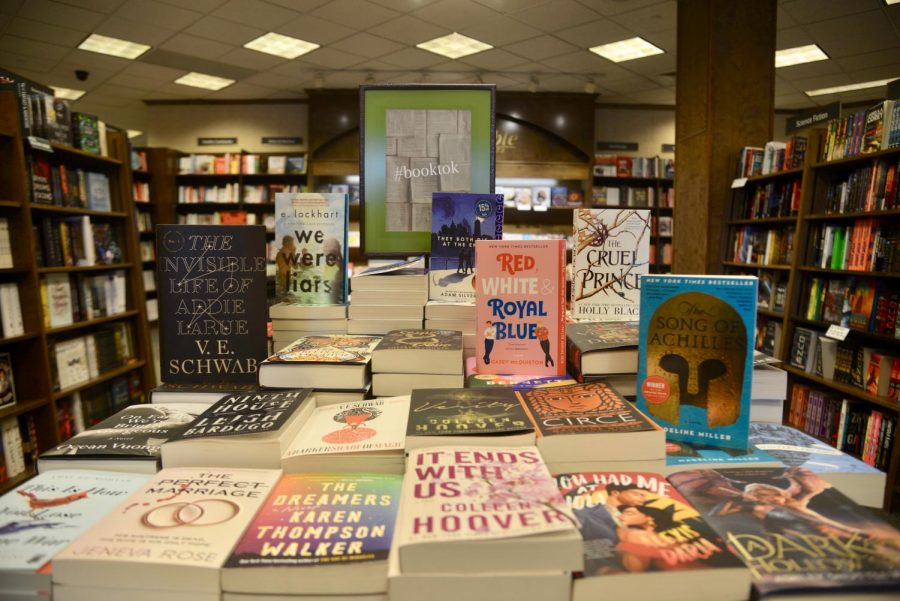 Booktok has spread its influence beyond TikTok, gaining its own section in bookstores.

Young Tik Tok users are sharing their passion for books with millions through increasingly popular accounts posting on #BookTok, a corner of Tik Tok devoted to reading, which has amassed up to 9.6B views and counting on Tik Tok.

These posts not only attract the attention of those who love to read but often rekindle an appreciation for books in those who haven’t read in a while or those who were never into books.

Sophomore Carla Alexanian said, “Watching the Book Toks inspired me to get back into reading after seeing so many book recommendations on my FYP. After a while, I was able to relate to the content being posted on Book Tok and I felt like I had found a passion.”

Sophomore Lori Daghlian finds that BookTok helps her find new reads of all genres. “I love the fact that I can go through to find books that interest me and see what people’s reactions are. It makes finding good books easier to find.”

BookTok has not only become beneficial to readers but also in bringing light to many books and authors. The community on Tik Tok has helped launch new authors and their careers propelling many books to the top of the bestsellers list. Adam Silvera’s They Both Die at the End was released four years ago but it wasn’t until August 2020 when the book found its way into Book Tok that Silvera noticed a bump in sales.

Madeline Miller’s The Song of Achilles, E. Lockhart’s  We Were Liars, Taylor Jenkins’ The Seven Husbands of Evelyn Hugo, Tahereh Mafi’s Shatter Me – all of which were published before BookTok existed- are among various other titles that have found popularity on the platform years after their initial release. “I never really had any interest in reading books mainly because I had a hard time finding books that were of interesting genres, but through BookTok I am able to find quick reviews of books that I may want to read,” Alexanian said.

BookTok has gained so much attention that retailers like Barnes and Noble created specialized shelves on the app to market popular titles to customers. As well as creating a ‘BookTok Reads’ section both online and in-store.

The BookTok corner of Tik Tok has not only been successful at launching sales in certain books but also launching the careers of new authors.

Chloe Gong published These Violent Delights in November 2020 during her senior year at the University of Pennsylvania. The retelling of the classic “Romeo and Juliet” set in 1920s Shanghai made the New York Times bestseller list but first, it gained immense popularity on BookTok in the days leading up to its release. “On Twitter and Instagram, you mostly reach the people that already follow you. But I noticed on TikTok, I was getting droves of comments from people who were just generally interested in books or generally interested in young adult fantasy or the kind of plot material that I was writing about” Gong said.

“Not only is it nice to find good reviews on books but creators on BookTok also upload fun videos that one can only relate to you after reading the book, so it really feels nice to be able to relate with others about a similar topic, ” Alexanian said.

Not only have new authors been finding success through BookTok but also struggling authors. Alex Aster published the middle-grade novel Curse of the Night Witch in June of 2020. Aster’s sales struggled for a while before switching her personal Tik Tok account into a BookTok account where she was able to reach thousands of people who quickly made her go viral.

The genres most commonly being reviewed on BookTok are romance and young adult-the cause of Colleen Hoover’s rush of popularity. Hoover has also seen a drastic interest in her novels written years ago. It Ends With Us, first published in 2016 has been selling tens of thousands of copies and topping bestseller lists largely because of the popularity it gained in the community. Daghlian said “It Ends With Us even though that cliche and nique answer the book really spoke to me because it was written nicely and was well developed.”

The top recommended books that left a mark on BookTok fans are The Seven Husbands of Evelyn Hugo, We Were Liars, It Ends with Us, They Both Die at the End, and The Song of Achilles. “With all the genres of books that have been featured throughout BookTok I have found a great passion for reading because to me it has become an enjoyable activity just like watching movies or going on social media,” Daghlian said.

The wholesome community has created an outlet for users to share their beloved passion with others without criticism. “My favorite aspect of BookTok is probably some friends I’ve made over mutual obsessions, as well as finding a place where you won’t be considered a nerd for reading,” freshman Tatevik Avetisyan said.