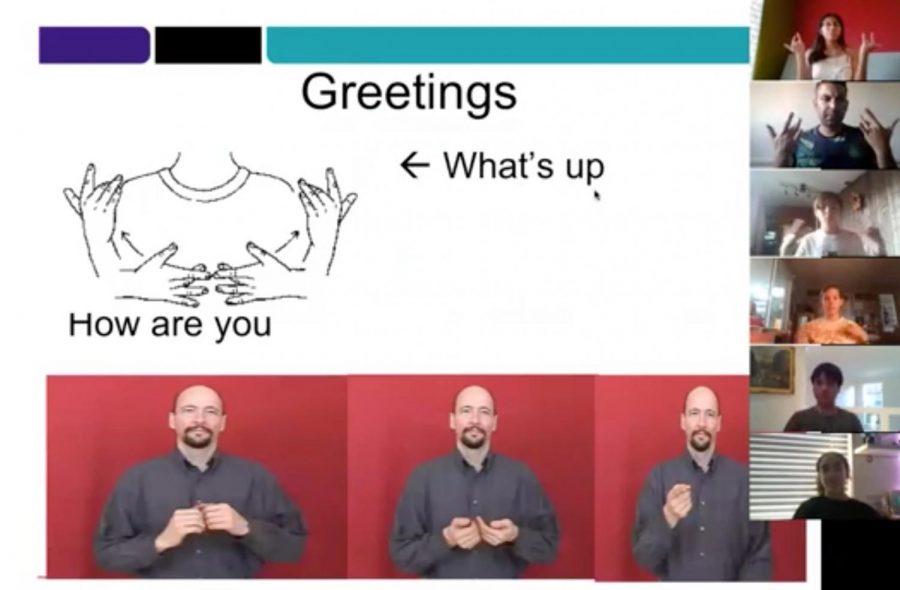 Unit 1 in remote ASL 101 classroom included how to sign the basics, such as greetings, colors and clothing.

It’s another Monday afternoon, one where my desk is cluttered with open textbooks, scribbled notebooks and binders like always. The clock strikes 3:56 and I frantically put everything away to get ready for my remote American Sign Language 101 class.

I log onto Canvas just in time to open the Zoom link. I see my classmates’ faces and their rooms in the background, and I wonder how strange it is that I’m getting a glimpse of their personal living spaces when I’ve never even met them in person. The professor takes roll, then we patiently wait for him to pull up his presentation slides and type out what the lesson will be for the day.

According to an article by Penn State University, the United States is the only industrialized country in the world that does not require its children to learn a foreign language other than English before graduating high school. Though it is certainly a viable option, with programs such as the FLAG programs in Glendale elementary schools, researchers from Penn State have found that only about 9 percent of the U.S. population is multilingual.

Freshman Gianna Howard from Heritage Christian School in North Hills says that she doesn’t know any other languages, but would like to start learning. “I don’t know any other languages, but I am starting to pick up Spanish because my brother’s girlfriend is teaching me,” she said. “[Language learning] is important because you can learn something new, whether it is cultural or something else… [also,] it can be helpful emotionally because you took your time to learn someone else’s language.

It’s evident that learning a new language is an opportunity to communicate with people who speak said language, but how exactly is it beneficial for the self? It’s proven that the earlier someone spends studying a language, the better they’ll learn it and because of this, elementary school students who learn another language perform significantly better on reading, math and language arts tests.

“It’s awesome being able to connect to other people, and being bilingual gives you this unique opportunity,” said Shauna Hong, a fellow classmate and sophomore from Crescenta Valley High School. “I wanted to learn a new language, and when I was looking through the available classes, I saw ASL and signed up right away.”

Clark senior Angelica Sargsyan also took ASL for a reason similar to Hong’s. “It is essential to learn new languages as it can expand one’s knowledge of the various cultures and its history, she said. “Communication amongst society can be improved.”

“This class differed from remote learning at Clark due to its visual component and required engagement,” Sargsyan added. “I had heard positive things about our professor which encouraged me to take this class more.”

The professor of this class was Shmuel Khorsandi, who gave his students greater insight into the deaf community.

Khorsandi started teaching ASL at El Camino College before GCC. He was born deaf and knows how to sign multiple languages, some of which include Colombian, Thai and Korean.  Learning to respect a foreign culture is not always easy, but definitely feasible as Khorsandi points out. “When I first lived in South Korea, my friends invited me for dinner as ‘welcome Korea dinner’,” he told me. “They ordered seafood, but the waiter brought a live beautiful huge octopus and put it in the boiling soup. My heart was breaking to see it, but in their culture [they were] celebrating to welcome me as a new visitor. As they explained many visitors came and freaked out and ran away. I had to learn to respect their culture.”

“Not only does… American Sign Language (ASL)… connect [deaf people] to others who are Deaf, it also serves as a membership card into a linguistic subculture of our society that not everyone is privileged to enjoy,” he said.

Professor Khorsandi also taught his students the false misconceptions that we had previously developed about ASL and the deaf community in general. For example, we were taught about language deprivation and how harm it can be to deaf children who grow up without a strong language foundation. If a deaf child is raised in an environment where they cannot learn to communicate with peers, the child’s cognitive development will be delayed. An article by Northwestern University specifically notes that language deprivation causes higher levels of trauma, mental health difficulties, and a general lower quality of life.

When I started the class I went in with the belief that ASL is mostly composed of fingerspelling words, which I soon found out was definitely not the case. Hong confirmed that she initially believed the same. “I thought ASL was signed by finger spelling every single word. When I told my friend group and family [this wasn’t true] they were all surprised and I learned how there’s a lack of understanding of what ASL is like and that there’s so much more to ASL than just hand motions,” she said. “Facial expressions, body language, etc. are all mixed into it.”

As Hong specified, facial expressions and movement are essential parts of signing in ASL, and in other languages as well. For instance, when asking a person a “yes or no” question, one must raise their eyebrows to indicate this. Similarly, when asking a “who, what, where, when, why, or how” question, one must furrow their eyebrows. Additionally, in ASL, most words have specific origins; in other words, there’s a reason why words are signed the way they are. An example is the word “elevator” is signed by signing the letter “e” then dragging it vertically across the palm of the other hand (as shown in the photo). 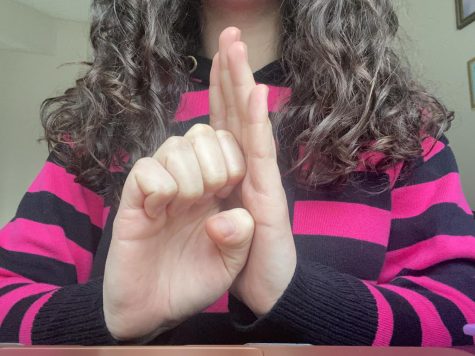 Another aspect of the deaf community that I was unaware of until I took the class was audism and its impact. Audism is the discrimination or prejudice against those who are deaf or hard of hearing and is assuming that a deaf person is unable to carry out an action for the sole reason that they are deaf. For example, assuming that a deaf person is physically unable to drive is audism.

Hong confirmed that she believes bilingualism improves the self. “As you explore a new language and deepen your connection to that culture, you’ll be able to communicate better. Great understanding can help you build lifetime connections,” she said.

Sargsyan said that she believes a good way to start learning a new language is to take a class as a foundation first. “I definitely think taking an official class is the most efficient/beneficial way to practice a language,” she said. “Additionally, practicing individually or with friends is a great way to put the language to use. One great tip is by watching TV shows or movies that only utilizes that specific language.”

In terms of how to get more involved with the deaf community and learn more information, Khorsandi suggests going to deaf clubs, contacting deaf charities or organizations, or searching for these resources. “It’s a fantastic place to meet new people, who share hearing loss in common as well as the chance to polish your sign language skills,” he said.