Explaining the dynamic between BTS and ARMYs

What BTS wants, BTS gets 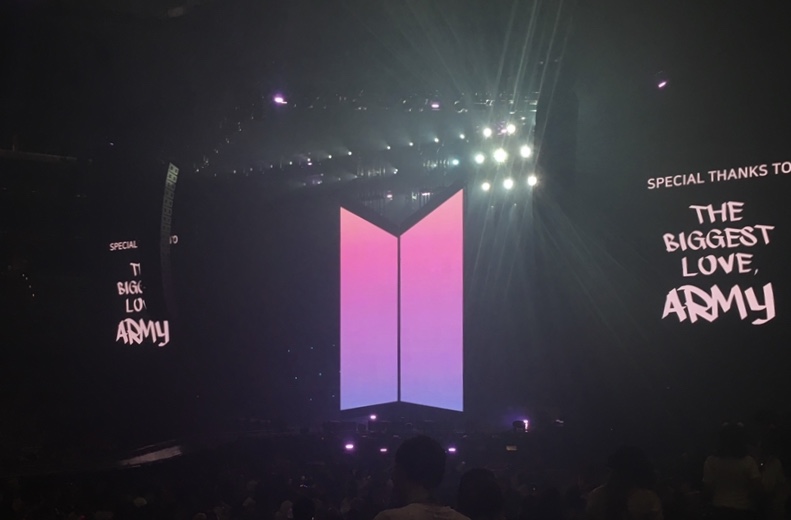 BTS always makes sure to leave a special message for ARMYS at the end of their concerts.

Many ARMYs, or BTS fans, agree that their connection with BTS is like no other. “It’s kind of a give and take thing where I give BTS my support and they give me happiness through their content and comfort through their music and fandom,” said senior Tyra Quiachon, the president of Clark’s KPOP Club. ”It’s this great thing where I can’t find the right word to describe it.”

BTS, one of the biggest boy groups, always gives back to their fans in meaningful ways, especially during these times where everyone feels stuck.

In order to bring energy to people, BTS came out with a new single Aug. 21 called “Dynamite,” a disco-pop song with a funky and airy beat, fun lyrics, and easy dance moves. The song’s purpose to upload the fans’ mood worked and ARMYs repaid them by making them chart number one on the Billboard Hot 100 chart. As expected, the single has been a stable hit and hasn’t left the top ten chart due to ARMYs’ hard work.

“We want to reach No. 1 on the Billboard Hot 100 and the Billboard 200, and we want to go to the Grammy Awards,” Suga said at a press conference for the group’s “Love Yourself: Tear” comeback in 2018. Two years later, when the news about Dynamite’s success hit BTS, there were tears and yells of excitement from the members. They even posted a video of them screaming on their Twitter account, @BTS_twt. BTS isn’t afraid to dream big and ARMYs aren’t afraid to make those dreams come true.

Not only was there crying among the group members themselves, but among the fans as well. “I was so emotional for Hot 100 because I also felt an achievement in a way since I was streaming that song,” Quiachon said. Quiachon was among the many ARMYs who helped stream that song and its music video, helping it get 100 million views in under 24 hours, making BTS the first artists to break that record.

Senior Mary Alemsharyan agrees that ARMYs’ constant hard work and support for BTS is admirable. “The fanbase tries extremely hard to make their songs chart and hit records to show BTS that their work is appreciated,” Alemsharyan said.

Alemsharyan is a part of the big wave of new ARMYs that came this year, and she says that the band themselves and their fanbase is completely different from what she had been used to with western artists. “To me, it feels as if BTS is more in touch and caring towards ARMYs,” she said. “I believe this is the result of years and years of working to get recognition.”

Although 2020 has been a rollercoaster year, there was one event that thousands of ARMYs were looking forward to at the beginning of the year — their Map of the Soul Tour, which would have started in April and ended in September.

However, BTS had a “the show must go on” mentality and thus, “Map of the Soul ON:E,” the online concert version of their tour was born and took place Oct. 10 and 11.

“It was fun because all the fans were awake on Twitter, despite the time zone differences, and they were live-tweeting and reacting to the performance,” Alemsharyan said. “Even though it wasn’t in person, the production was still so amazing.”

The love that BTS has for ARMYs, Alemsharyan says, is most apparent when they write their fans letters and give heartfelt speeches during concerts. A famous example that especially moved her was when the band’s leader, RM, told the fans during their ON:E concert, “I wish there was a better word than ‘love.. I really, truly love you. Please know that.”

The concert took place for two days and Quiachon was one of the viewers who thought that both concerts were amazing. “The ‘ON’ opening made me nostalgic and sad since it reminded me of their other concerts where they opened with ‘Dionysis’ or ‘Idol,’” Quiachon said. “My favorite performances from ON:E were ‘My Time,’ ‘Ego,’ ‘Boy with Luv,’ ‘UGH’ and ‘Zero O’Clock.’”

Sophomore Nikki Ballesteros also felt that “My Time” and “UGH” were two of her favorite performances along with Jimin’s performance of ‘Filter,’ which consisted of different outfits for both days. “I love the ‘UGH’ performance because it gave such great energy and made me jump off my seat and sing along,” she said. “What I loved about the MOTS:ON:E concert was pretty much everything all the way from the start to the end.”

Their concerts have also been a great source of comfort for Quiachon and Ballesteros. Quiachon recalls BTS’ final Wings Tour concert where they gave their closing speeches and the members talked about some of their struggles. “I remember that day I had gotten into an argument and I just wanted to be able to watch it already to blow some steam and when I did, their words really grounded me,” she said.

“One moment where they impacted me was on May 4, 2019, when I went to their Speak Yourself Concert at the Rose Bowl Stadium and saw them for the first time,” Ballesteros said. “That whole time during the concert I felt so much euphoria, and I would look around and see the other fans and I said to myself ‘this is where I belong.’ Their music has brought so much comfort and joy to so many people.”

Quiachon, who attended both of their concerts in LA for their Love Yourself and Speak Yourself tours, says that the energy and hype in the concerts are just different. “You are transferred into a world where it’s just centered around BTS and nothing else really matters in that moment and it’s just an indulging experience,” she said. “No matter how far back you are, you’re just with them and it’s just a great experience with everyone.”

Sophomore Shirley Putti agrees that their concerts are a memorable experience since the members constantly show that they truly love and care about their fans. “What’s special about their concerts is the amount of passion every single one of them have,” Putti said. “You can see how hard they work to make every second count”.

Putti also stayed up for the ON:E concert and found it impossible to choose a favorite performance. “They never fail to deliver powerful performances, even with the unfortunate circumstances,” she said.

Ballesteros loves how the outfit changes in their concerts would correlate to the song’s mood, which helps avoid the concert from looking boring, making the fans excited with anticipation for what song and which outfits are coming next. “Another thing that makes the concert memorable is how all the fans would shout and do the fan chants that could be heard from miles and miles away,” she said. “The army bombs (BTS’ lightsticks) were also special since not only would they change colors for every song, but they would also move to the correct beat and motion.”

BTS concerts allow most of their fans to be in one place and see faces that ARMYs are used to communicating with via social media. Quiachon, for example, enjoys the sense of community that ARMYs have. “I especially felt the love and connection ARMYs have with BTS this when I joined social media platforms like Discord or Twitter where I could just easily connect with someone.”

Junior Pateel Arabian sees the fandom as one big family that’s accepting and kind. “Being part of this family has helped me be the person I am now,” she said. Arabian also notes that being an ARMY has brought her many friends around the world. “For example, I went to IKEA and the cashier saw my photocard in my phone case and we talked about how we discovered BTS along with our biases (favorite members).”

Alemsharyan says that she has a fun time seeing the humor ARMYs have on Twitter along with the support they have for BTS. “[ARMYs] show their thanks to them in so many meaningful ways such as art, edits, letters and interactions,” she said.

ARMYs love paying BTS back for the amazing music they put out since it’s a big source of comfort for fans, especially the ones they write specifically for ARMYS.

Ballesteros describes BTS’ music as special and meaningful since their songs are always either good, calming or sad, or they are songs that make you want to get up and shout out the lyrics. “‘Magic Shop,’ for example, is very comforting since this song sends the message that if you’re feeling sad or stressed, you can hold BTS’ hand and walk inside this magic shop, where you forget all of your worries and think of all the happy moments instead.” Their songs continuously make Ballesteros feel safe and remind her that it’s okay to feel sad, which removes any feelings of loneliness.

It’s those types of meaningful songs with a ‘we’re in this together’ attitude that make fans like Quiachon want to stay with BTS. “It’s those types of songs that make me want to fly and feel free and stick my heart out and let go of anything that’s bothering me,” she said. “I feel really comforted when I listen to their songs like ‘Magic shop,’ ‘Mikrokosmos,’ ‘Paradise’ or ‘Crystal Snow’ where I can just listen to it with headphones, close my eyes, and feel the music.”

Arabian recalls the moment BTS released their song called “Spring Day” in 2017. During this time, she had already been listening to them for three years. The lyrics, which made her break down crying once she heard them, were very powerful and she felt a connection towards them. “The meaning behind “Spring Day” is to seek comfort from the difficulties in life, no matter which path you take,” she said. “The lyrics struck a chord in my heart considering my past.” In that moment, she felt very grateful that she had BTS to rely on during the most difficult time of her life.

Arabian thanks BTS for always helping her through her hardest times. “They have done so much for the world, so it just feels natural to support them as much as I can,” she said. “They are the ones who remind me that there is always light after the darkness and to never put myself down.” To Arabian and ARMYs, BTS are their light and hope.

“I am very grateful to them for not only making great music, but for also spreading across a good message and awareness to things that a lot of people don’t talk about,” she said.

In fact, when BTS donated to the Black Lives Matter (BLM) movement back in May, ARMYs decided to kick it up a notch by donating the exact same amount, which shocked Alemsharyan to see how big the fans’ reactions were.

“BTS donating $1 million to the BLM movement was surprising to me since many celebrities stayed quiet or donated very little,” Alemsharyan said. “I remember thinking, ‘Wow, [BTS] are insanely powerful’ since no other fanbase did something like that, so that moment was really special.”

ARMYs are now ready to show even more appreciation back by preparing for BTS’ upcoming comeback on Nov. 20. Many have even already pre-ordered their album since it’s going to be their biggest one yet, both in physical size and in heartfelt meaning.

“I feel like this is going to be a more sentimental album and I’m a sentimental person, so I’m excited for that,” Quiachon said. “I can’t wait to see them become the people they were destined to be. It’ll give us happy times during this dark, dark year.”

BTS makes Quiachon, along with all the other ARMYs, feel like they’ll forever be a part of something big and meaningful. “They don’t need to know me, I don’t care about that, but I’m glad I stuck around to see their destinies and passions unfold.”