Safer is not equal to safe. 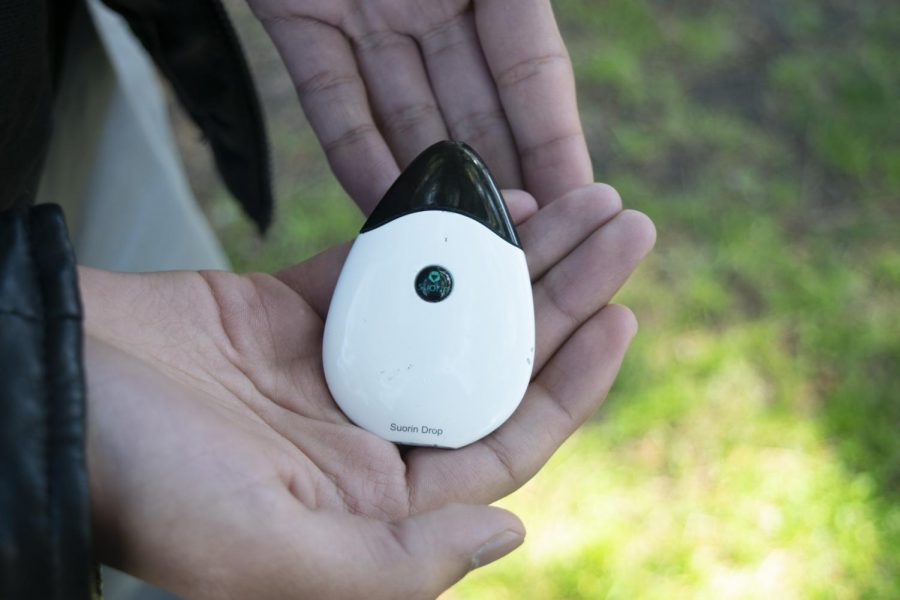 A student holds a Suorin drop despite knowing its consequences.

Everyone has seen it before. Sleek and perfectly fitting. It’s not a flash drive, but an e-cigarette, nicotine’s big new product.

Teen vaping has become a big problem. Many young teenagers believe it is better if you use e-cigarettes rather than smoke a cigar because tobacco companies promote e-cigarettes as being a safer product for smoking.

“I vape because it is my way of relieving myself from any stress I have,” said one freshman student who declined to give his name. “It is a way for me to forget all of my problems.”

Although vaping may temporarily relieve stress and anxiety, the ingredients found in vapes, such as nicotine, are highly addictive. In some cases, nicotine remodels the brain and can eventually lead to teens wanting to try harder drugs. Moreover, nicotine can interfere with daily life.

“When you start smoking at an early age, around 15 to 21 years of age, you are more likely to be a lifetime smoker,” said Narbeh Der-Gevorkian, health teacher and TUPE coordinator at Clark. “Studies have shown that about 90% of daily smokers started in their teenage years.”

Many claim that the main ingredients in e-cigarette liquid — propylene glycol (PG), which is used in food flavorings; and vegetable glycerin (VG) — are safe to consume. The truth is, they have only been tested as safe to ingest, not safe to inhale. The effects that PG and VG cause when inhaled are unknown.

“Vaping is a trend, and teenagers, who are more prone to influence from trends and peers, are tempted to try vaping,” Der-Gevorkian said. “Vapes also have a variety of different flavors and nice smelling scents which make them more appealing to teens.”

Levels of diacetyl, a highly toxic chemical compound used to give a butter-like flavor to foods, have been found in e-liquid. Although it is true that the levels of diacetyl that a cigarette contains is much more than the level of diacetyl in e-liquids, it is still a very harmful substance that can eventually lead to popcorn lung. Popcorn lung is a condition that damages your lungs’ smallest airways which causes coughing and shortness of breath.

“Whenever I would vape, I would constantly find myself coughing a lot,” said a sophomore who declined to give her name. “The excessive coughing made me realize that every puff I took damaged my lungs. This and many other things led me to quit vaping.”

In 2016, the UK banned diacetyl in e-cigarette liquid under the EU Tobacco Products Directive (TPD), yet there are still traces of this harmful substance in e-liquid today.

“No matter how appealing e-cigarettes seem to anyone, they are really bad for your health and will lead to worse habits like smoking actual cigarettes in the future,” said freshman Nicole Matar. “I don’t vape because many adults in my family smoke cigars and cigarettes, and I see the consequences first hand so it never really interested me.”

Vaping nicotine can also be a very expensive habit. In California, juul pods cost near $20 for a 0.7ml pack, but some companies, such as Suorin, sell pods nearing $10 per 2 ml pod. “When I used to vape, I usually bought two or three Suorin pods at a time which were $7 each, since sometimes they would be burnt or defective,” said a senior who declined giving his name. “Juul pods were around $20 which was too much for me, so I stuck with Suorin.”

Getting caught vaping as a minor does come with a variety of consequences. The legal age to purchase e-cigarettes in California (and many other states as of now) is now 21, with it being 18 in some other states. However, most people don’t turn 18 until their senior year of high school, and most people who are teens who vape are under the age of 18.

“I was able to get vapes and e-liquid through some of my friends who either knew someone that was of legal age or were not ID’d when they went into a shop,” said a GHS student who wishes to remain anonymous.

Although vapes do not contain tobacco in them, they are still classified as a tobacco product by the FDA. Vaping is prohibited for both adults and teenagers in places of employment, schools, cars with other minors, and more. Not taking into consideration local laws, teens in California are unlikely to face legal action against them as it is only a criminal act to give a minor an electric cigarette, but is not necessarily illegal for a minor to possess a tobacco product.

Regardless of this, the decision to vape or to not vape lies with the individual. No amount of research can ever impede a student from vaping. “I am aware that it is the wrong thing to do and I am, in no way, shape, or form, trying to push teens into thinking that they should try it,” said an  freshman who wished to remain anonymous. “I do it and I will suffer the consequences for doing it.”