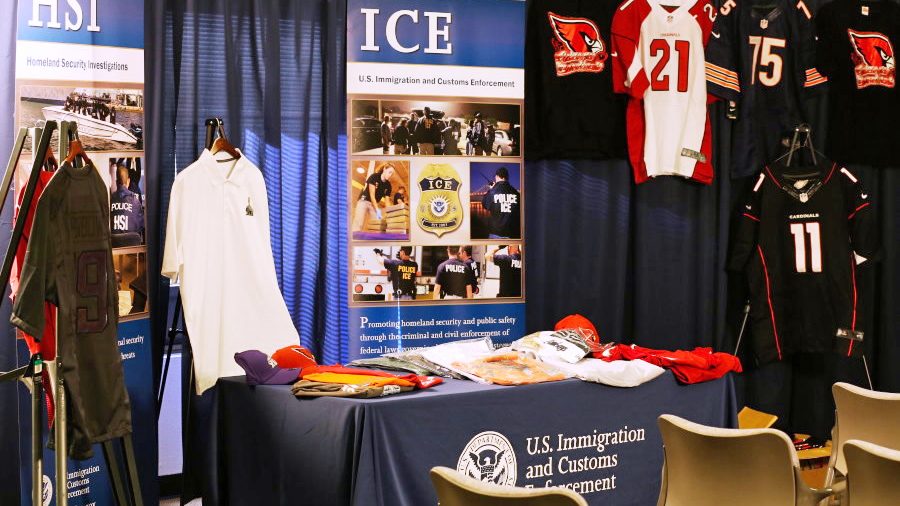 Many sports jerseys are replicated and sold as fakes, with the process tricking many fans as well as reeling millions of dollars

“Once I bought a pair of shoes once from eBay,” says sophomore Khalia Krusee-Leaver, when describing her experience with counterfeit online purchasing. “It showed a picture of wearable shoes, so I decided to buy it.” According to Leaver, when she finally received the package, it turned out very different from what she expected. “Instead of getting shoes, I got a paper cutout of shoes,” Leaver said. “They were just paper, and when my dad asked for a refund, the company that sold it to us got mad.They told us to read the description, but there was just the picture of shoes. Luckily we got our money back, but because of that, I only trust Amazon when it comes to buying that type of stuff now.”

You see them almost everywhere on the Internet: random people selling pieces of clothing on online applications like Amazon, Ebay, Alibaba, among others. Worldwide retail ecommerce sales have reached $1.915 trillion, with millions of entrepreneurs and normal people wanting to take some of that profit.

Clothing brands such as Supreme and Nike have been experiencing an increasing demand for their exclusive products on the Internet. Nike saw a 13 percent rise in brand value last year and is now worth over $32 billion, making it the most valuable apparel company in the world in 2016. Many Supreme items are being resold online for thousands of dollars. Luxury shoes like the Adidas Yeezys by Kanye West go for at least a few hundred bucks with the Yeezy Boost 350 starting at a price of $3500.

Even non-luxury brands like H&M and Zara are experiencing the trend also, as their stock prices and revenue have skyrocketed, following Nike as the most valuable apparel brands this year, each being respectively worth over $15 billion.

Everyone — from rappers to YouTubers and teenagers — is continuing to get in on the new trends, investing millions of dollars in total on shoes, T-shirts and everything in between. Many of these buyers show off their new clothing on a slew of social media platforms, influencing more people to buy online. With this new boom for expensive clothes and more gullible customers, there comes a new, nefarious trend: fake clothing.

Counterfeit clothes are a new, pesky problem many people face in the growing online marketplace. Many of the fake clothing pieces are almost identical to the genuine ones, with only small differences that are almost impossible to see, especially online. There are even retail stores and websites devoted to selling counterfeit clothes. Many criminals smuggle cargo loads of fake items to sell to innocent customers, illegally making millions of dollars in the process.

Recently, a man named Su Ling Ming has been busted for a counterfeit clothing brand making fake Nike shoes, a scheme that made almost $250 million, according to the New York Daily News. Fake clothes can be found anywhere everywhere. In fact, these crimes are so common online, many Clark students have become skeptical about whether to use their money to buy clothes off the Internet.

“I don’t always trust the Internet,” says sophomore Sofia Haiduk. Haiduk says that many of the clothes she buys online are the opposite of what the seller online told her. “Even from brand stores online, I got some items that weren’t very good quality.”

“It’s difficult enough with the internet because, [the product] will only be proven [whether it’s real or not] when you receive the goods,” says Elaine Snodgress, Clark’s business teacher. “It’s always with the consumer. It’s always ‘buyers beware’. The consumers are very educated, but there’s a lot of fraudulent items out there and a lot of counterfeit knock offs.” Snodgress says that the only true way to prevent getting ripped off is to be aware of some important details before ordering.“I think if you know you’re getting something at a very good price then be suspicious.”

So what can you do when you get ripped off on the internet? “Some people won’t report it because they just lost some money, but you have to report it cause we need know about it,” said former FBI agent and Pasadena police Lieutenant, John Dewar.

“If there is any internet theft, then we go ahead and prosecute it. We’d interview the person and write a criminal report on it.” Dewar says that these Internet theft crimes are common, but most cases never end in a prison sentence or punishment. “Usually the on other end, they’re (the suspect) probably in another place in the whole world, so finding the suspect is pretty tough. It’s even harder to prosecute these cases because the Internet is worldwide, not just in Glendale,” says Dewar.

Dewar recommends checking the website to be safe and also seeing if the item and seller seem believable or trustworthy. But in the end, there only seems to be one way to resolve the situation of counterfeit clothing. “Protect all your information and money from the wrong hands,” Dewar says. “If it seems suspicious, just don’t buy it.”