A response to the S.O.S (Student On Stress) 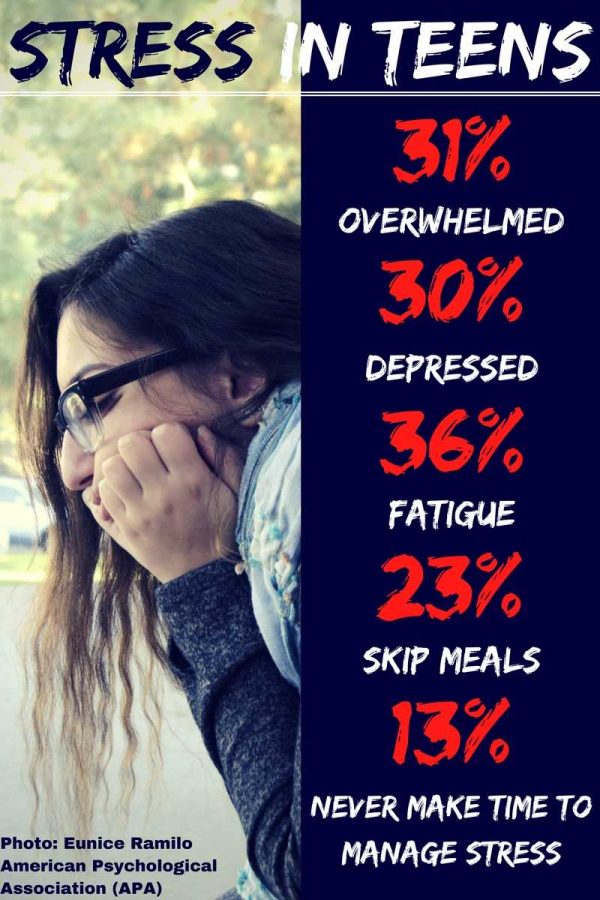 Junior Courage Kim said that he has always been stressed from three things: tests, parental expectations and teachers’ expectations. Kim said that stressing over a test causes him to freeze or to blank out and forget everything he studied for; and as a result, he ends up getting a low grade.

Along with the stresses of tests, Kim struggles to live up to the expectations of his parents as well as to those of his teachers. “My mom is all about grades,” Kim said. “If I get an A minus with only two wrong, she’ll complain about my two mistakes…it’s as if she doesn’t appreciate my effort.”

According to an article in USA Today, stress is having an increasingly negative impact on teenagers’ lives and on teenagers themselves. A study shows that 27 percent of students experience high levels of stress during the school year, while 34 percent expect even higher levels in the following year. Along with stress comes its effects: 40 percent of teens say that stress makes them feel mad; 36 percent say it causes anxiety; and 29 percent of high school students say they’ve been “feeling sad or hopeless almost every day for two weeks or longer during the past year.”

Although it may be tempting for some to resort to junk food or social media to override stress, there are other healthy alternatives to relieve and deal with stress, one of them being sports.

Even though sports have been perceived as sources for physical enhancement, physical activity is also a great source of mental health relief. According to an article from the Stress Management Society, participating in different kinds of sports increases the production of endorphins, which are chemicals released by the body that reduce one’s perception of pain. More endorphins mean less pain and more mental stress relief. The article also suggested that the best way to get involved in a sport or exercise is to start out with creating a simple routine whether it be going out to the gym once or twice a week, or taking 30-minute walks around the block every day.

Sophomore PE teacher Judy Thomsen said that exercise helps improve students’ comprehension and memory, which can actually help them improve in their challenging academic classes. Thomsen also said that when one exercises, both the body and the brain benefit since they work in tandem with each other.

Thomsen starts off the first five weeks of her class with the introduction of different kinds of exercise. Afterwards, students create their own workout programs. In doing this, Thomsen said, students discover which exercises appeal to them the most, and once they do, they’re able to relax and release stress through exercising. “I want to introduce the element of fun in working out to my students,” Thomsen said. “I want them to apply what they learn here and take it with them for the rest of their life.”

Senior Kuba Nogalski said that in order to release his stress, he shifts his focus to sports such as running and soccer. “When you do sports, you forget about everything,” Nogalski said. “Whatever you’re stressed about is not important. Once you look back at your stressful moments, you’ll realize how worthless being stressed is.”

Another way of releasing stress is through music. In her article, “The Power of Music to Reduce Stress,” Jane Collingwood discusses the positive effects that music has on the brain and how those effects can lead to further stress relief. According to the article, calming classical music seems to have the most effective results on the mind and body in that it “slow[s] the pulse and heart rate, lower[s] blood pressure, and decreas[es] the levels of stress hormones.”

Listening to classical music is not the only way of releasing stress musically. Other ways include singing along to a favorite song or even doing some karaoke with a group of friends. Kim said that his main ways of relieving stress, in addition to listening to music, are through singing, songwriting and playing instruments. He plays the ukulele, violin, guitar and piano; but out of all these instruments, he works more with his guitar trying to create his own songs. “I like to take some time to play my guitar, strum some random chords, and try to come up with something that sounds good,” Kim said. “I make songwriting a habit because it’s my passion and it makes me happy”.

Meditation and yoga are other effective ways of relieving stress. An article in The Huffington Post indicates that taking breaks, especially through meditation, are vital since giving the mind a break allows the body to rest for a while after a long day of expending energy. It also allows one to step back from hectic reality and just relax in a temporary paradise so that the mind would be able to unwind.

According to an article in WebMD, meditation can help one to live a balanced life. It retains positive effects which include lowering blood pressure, strengthening the immune system, and improving the ability to concentrate. An informational article from Live and Dare shows the different types of meditation as well as its different approaches. Meditating can be as simple as sitting and staring at a candle, or it can be religious like mantra meditation in which one would continuously recite mantras while sitting in a quiet place.

Math teacher Amir Ghavam said that he used to practice a type of yoga known as Hatha yoga which includes the practice of balancing oneself while paying attention to one’s breathing, a practice he found beneficial. Ghavam said that meditation allows things to be just the way they are, allowing the release of stress. He also said that meditation allows one to embrace stress and make way for its existence rather than resisting it. “I’d like to think that It’s worth it for students to do [meditation and yoga] even for just a few minutes a day,” Ghavam said.

English teacher Narine Tatevosian said that teachers should be aware of the stress students are going through because teachers relate with the fact that stress is something that everyone goes through, not just students. “Stress is the state of being overwhelmed,” Tatevosian said. “If you need to talk, then talk. Everyone needs that outside perspective to help them see things clearly.”

Head Counselor Karine Turdijian said that student stress is a direct result of course load, family problems and emotional problems. She said that she and counselor Susan Howe share what they hear from students to the school administration through their weekly administration meetings. Based on the feedback from these meetings, the school district has provided psychologists to deal with students who are having a hard time coping with stress. “Last year, we only had one psychologist that worked one day a week,” Turdijian said. “Now our administration continues to request for psychologists to work [longer hours] per week so the students can have more support.”

As a response to the problems of human stress, the Glendale Unified School District has created a mandatory training for all teachers to help students with their stress. English teacher Maral Guarino said that in the training session, Karen Carlson, GUSD Coordinator of Mental Health, will speak to the staff about mental health and the signs teachers could look for in students in distress, whether it be through physical features or through writing.

Guarino said that this is the first official training that teachers will be having regarding student stress. She also said that she is excited that Carlson is directing the training session because Carlson used to be the head counselor at Clark, and as such is aware of “Clark culture” and what the students go through. “We as teachers are very aware of student stress and we want to do everything we can to alleviate that,” Guarino said.