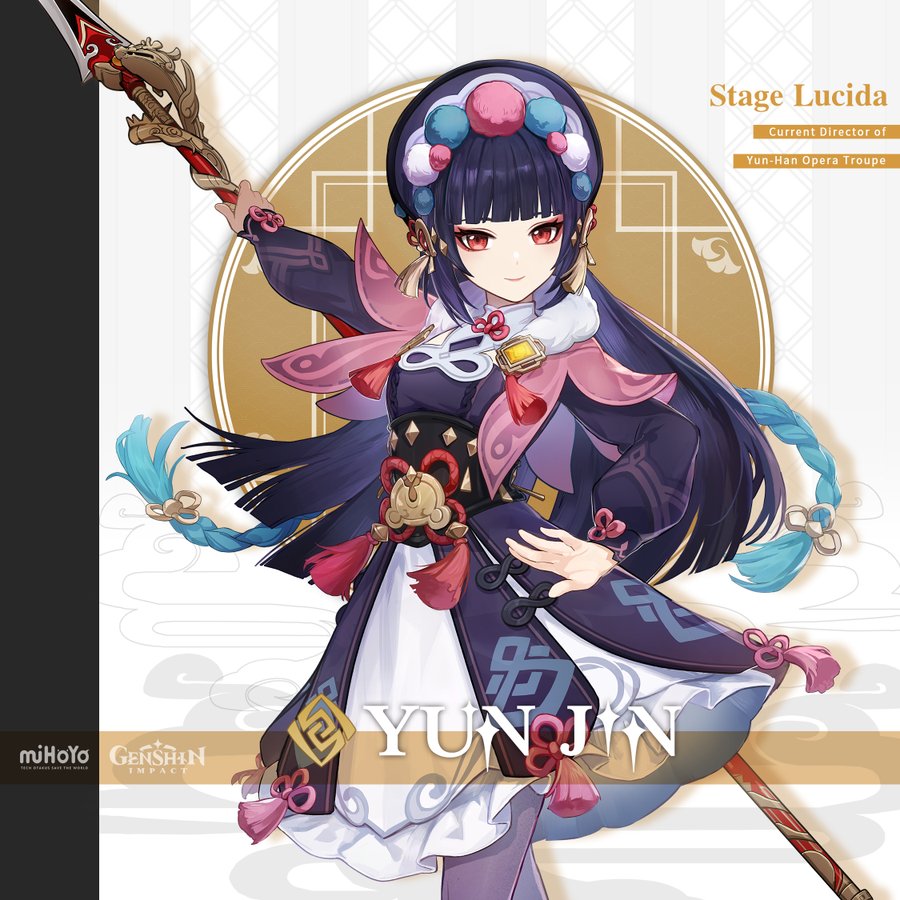 Yun Jin's official character art released upon her reveal. She was teased earlier at the 2021 Game Awards as well.

Since its release in September of 2020, Genshin Impact has grown immensely and held its spot as one of the top mobile games of 2021 going into this year. The game is an open world action-RPG with a large emphasis on exploration and character collection. The game currently has three playable regions: Mondstadt, Liyue, and Inazuma—based on German culture, Chinese culture, and Japanese culture respectively.

The January update of this year introduced a new character, Yun Jin, a character based on traditional Chinese opera. In the game, Yun Jin has voice lines sung by professional Peking Opera singer Yang Yang as well as a full opera song as part of the game’s story.

Peking Opera is a form of Chinese opera that specializes in incorporating martial arts into the performances. Costumes are typically elaborate and exaggerated to allow the viewer to see features no matter where they are in the audience.

Yun Jin’s introduction to the game was a novel experience for not just the player base but the developers as well. Yun Jin is the first character to have two separate voice actresses in any language dub, with one for her spoken lines and another for her sung lines.

Yang had never done work with a video game company before, and she expressed her excitement for the whole process. “This collaboration was a very novel experience for me,” Yang said. While it was hard for her to imagine how such an overlap of media would look, she was incredibly impressed by how much effort went into Yun Jin’s creation. “I am very happy to be involved in this project, to use my voice, my field of study to create this character,” Yang said.

The introduction of the song, “The Divine Damsel of Devastation”, sparked a massive wave of interest in not just the game itself but also in Chinese opera. Hundreds of videos popped up overnight on Chinese video viewing site BiliBili and YouTube, from covers of the song to reactions to the performance, spreading word of the game like wildfire.

The Genshin Impact YouTube channel shared a short documentary about Yun Jin’s development to commemorate her release. Xiao Luohao, a member of Genshin’s creative concept and writing team, feels Yun Jin was a way to bridge the gap between tradition and a new wave of media. “The age of the audience as a whole is always changing…[Yun Jin] will revitalize some works that may be more distant,” Luohao said.

Genshin Impact pulls from various cultural legends and influences for their characters with the goal of sharing them with the world. Yun Jin is an exemplification of this; Peking Opera is not as popular with newer generations in China, let alone the rest of the world. Genshin Impact, however, has a global playerbase, making them the perfect platform to explore and introduce culture to people who would otherwise likely not be exposed to said culture.

The world is always changing, and new art is constantly being made. At the same time, traditional works may be left behind. “If there is a way to use Genshin Impact…to expose people to the artistic crystallization of Chinese traditional opera and even generate interest in the art itself…then our efforts would already be worthwhile,” Luohao said.