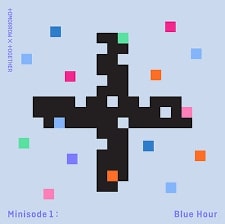 Tomorrow X Together (TXT) comes back this year with a new mini album this year titled “Minisode: Blue Hour” that serves as a bridge from their previous album, “The Dream Chapter: Drama,” to their upcoming next album next year.

On Oct. 26, TXT released their EP and the music video for their title track called “You & I Found Each Other at the Sky of 5:53” in Korean and “Blue Hour” in English.

TXT continues their tradition of having long title track names. After all, they do have an uncommonly long name for their group name, along with a lengthy name of their fandom (Moments of Alwaysness). TXT always stands out as a group, showing how unique they are.

“Blue Hour” turns out to be a really sentimental and special title in various ways.

Blue Hour is described as the period where the sky takes on a blue hue during twilight. During October, South Korea experiences the blue hour at 5:53.

Not only was 5:53 the time that the sun rose on Oct. 26, but blue hour also took place during that specific time on Aug. 22, which was a special day where TXT unveiled their fans’ fandom name. In a sense, that’s where TXT met their MOAs for the first time.

Upon listening to “Minisode” for the first time, there was a realization that there is a comforting feeling laced in the EP, almost like TXT understood exactly what you’re going through.

This is a similar feeling that I get when watching coming-of-age films and that’s when it hit me. “Minisode” made me feel like I was listening to the original soundtrack of a coming-of-age movie. In these types of films, the character goes through something life changing which is seen through the Hero’s Journey.

Here’s how TXT’s five new songs fit into these stages.

“Ghosting,” the first track, describes the reality that many teenagers go through — the pain of having someone ghost your messages. The chorus, which Taehyun rewrote three times, says, “You disappeared for a moment, you disappeared/ Like a faint ghost/ In a room where only echoes linger/ I wander alone all the time/ I’m like a ghost.” Although the person you’re messaging might feel like a ghost after they ignore you, you’ll end up feeling like the ghost after feeling invisible. Taehyun, along with the rest of the group, really knows how to make you get into your feelings. Ouch.

This song would be perfect for a driving-around-in-the-car scene with your friends, much like the famous highway scene in Perks of being a Wallflower. The atmospheric song gives off nostalgic vibes that hurt, but in a way, makes one want to get up and dance.

The way the members’ voices blend together in “Ghosting” highlights how amazing TXT are as vocalists. Soobin’s high notes in the song resemble the high feeling you get when you get a taste of freedom, yet the lyrics are actually hard hitting.

Through the lyrics, we see that the main character is stuck in reality, but as the next track starts playing, they have departed from the Original World and into the Special World where there’s a blue hour.

What a genius way to start off the album.

“Blue Hour”, the second track, is the main character’s call to adventure where he is at the boundary between two worlds. In the song, the lyrics reflect the members’ appreciation for this unknown world that they found and express how they never want to leave. In the music video, the complex colors of the sky seen represent the complex feelings of life, such as isolation.

The wonderful thing about music is that it’s up to interpretation. So, here’s how I connected some dots.

As Beomgyu explained to Teen Vogue, the sky represents feelings such as solitude and unfamiliarity. These might have been the same feelings the main character felt when he was ghosted in the Original World. Now, the main character is in this magic world with his group of friends where they sing, “At the hour between dog and wolf/ I want to be trapped in the magic/ Blue hour!” In the time of blue hour, the lighting stops you from being able to differentiate between dog and wolf, or in other words, friend and foe. That’s where the complex feelings come from.

“Freeze this moment/ I wanna stay/ (Can you feel the rush)/ On the boundary between the two worlds/ I want to leave a trace of you and me/ Come on let’s do it.” From these verses, it’s clear that the main character is trying to desperately hold onto this “normalcy” that he has created for himself. “Blue Hour” is about realizing that the relationships with the people you love will inevitably change and there’s nothing you can do about it. All one can do is hope and cling onto those fond moments.

While “Ghosting” is about reality, “Blue Hour” is about blissful ignorance.

There’s something special about creating memories with your friends during your teenage years, and the instrumentals reflect it well.

If there’s one thing clear about TXT, it’s that they’ll always carry surprises. Their range when it comes to genres is impeccable. “Blue Hour” is a different sound from all of their previous songs, especially since they took a funky disco-pop approach. The dance break version is personally my favorite since it includes a cowboy dance.

It’s not a coming-of-age movie if the main character doesn’t go through a crisis, which is shown in the third track. “We Lost The Summer” reflects a reality that the majority of the world is facing.

“That eternal vacation/ Repeating morning/ Our time has lost the weather/ Ruined in winter.” The somber lyrics tell the story of how COVID-19 has affected TXT.  Although this is the group’s story to tell, the loss of summertime is something that people all over the world have mourned. Instead of creating exciting memories with your friends, people are left with what seems like an eternal winter.

When Bighit Entertainment released the track list of the EP, it was expected that “We Lost The Summer” would hit us right where it hurts. However, the beat and choreography of the song turned out to be a twist.

TXT knew what it was like to have your world stop due to the pandemic, especially since many of their plans (e.g. world tour) were cancelled. They took this pain and delivered an upbeat song in the most bittersweet way — melancholic lyrics and a dangerously cool choreography.

“We Lost The Summer” is a striking contrast to one of their songs from “The Dream Chapter: STAR”, their first mini album, which happens to also be the third track. “Our Summer” tells the story of a boy who has a special someone who makes him feel like it’s summer every day. This summer experience would’ve happened again if it weren’t for the pandemic. “Wherever you are, in any season/ If we’re together, feel like summer” is the complete opposite of “We lost summer/ We lost each other.”

As the album transitions to the fourth track, we get a completely different feel from “We Lost The Summer”.

“Wishlist” is the ultimate anthem that highlights the happy moments in the initiation stage. While the main character in a coming-of-age film can go through some hardships, there will always be a moment where they feel as if they’re on top of the world.

That special moment is reflected through the song’s lyrics. “Wishlist” is about finding the perfect gift for your special someone, which usually gives off intense and excited feelings. The instrumentals perfectly capture that essence, especially with the excellent bridge that includes clapping noises in the background.

If your love language is gifts, this song is for you.

The last track on the EP, “Way home”, marks the departure stage. At this point of a coming-of-age movie film, the main character has already gone through the life changing event in the Special World, and is back in the original world with the information that they have gathered.

“Way Home” is the perfect way to end the album, and it would be the perfect track to end a film. After experiencing “Wishlist,” the listeners are sent to a dimension with a wistful and nostalgic ambiance. With an R&B sound, the song depicts the complicated emotions a boy has as he makes his way back home with his friends while they feel like they’re surrounded by unfamiliarity. However, despite those uncertainties, he knows that they will remain a group of friends if they keep their memories with each other alive.

“I make a wish upon the sky/ That we could remember each other forever/ Until we can call each other’s names/ We run together forever.” The lyrics in “Way Home” wraps up the theme of the EP.

“Minisode1: Blue Hour” is an ode to your friends and the love you have for them.

The song gives off the reassuring message that although change is inevitable, you’ll be all right as long as you have your friends beside you. This theme of friendship is something that’s commonly explored in coming-of-age films, such as Booksmart or Love Simon. Both films display the awkward teenage life and the immense love there is within the main character’s friendships.

TXT has always been real about friendship and what it means. Their title track, “Can’t You See Me?,” from “The Dream Chapter: Drama” is all about the dark side of friendship. The instrumentals, choreography, and lyrics of the song all reflect a broken and fragile friendship where betrayal and fights take place.

The five songs of “Minisode” explain softer feelings that are indescribable and hard to write on paper, which is why it’s so special, especially since it’s sung by teenagers who are going through these life experiences. If one thing is for sure, it’s that TXT will always provide comfort in unimaginable ways.

“Minisode” has also proved how unique TXT are as artists. They brought MOAs a cohesive album with amazing production. TXT never disappoints with creating songs that make you nostalgic about memories that you’ve never experienced.

Hence, TXT’s new EP is the perfect original soundtrack for a coming-of-age film. It’s also the perfect album to listen to as you’re having an existential crisis or going on a midnight drive.

TXT are the leaders of youth and the meanings behind their songs prove it.

Seeing that a lot of members have participated in the production and songwriting aspects of the album, I’m excited to see all of their future works. Each song on the album display the variety of range TXT has in terms of different genres.

I’ll be looking forward to TXT’s new album next year and see how the stories of their new chapter unfold.