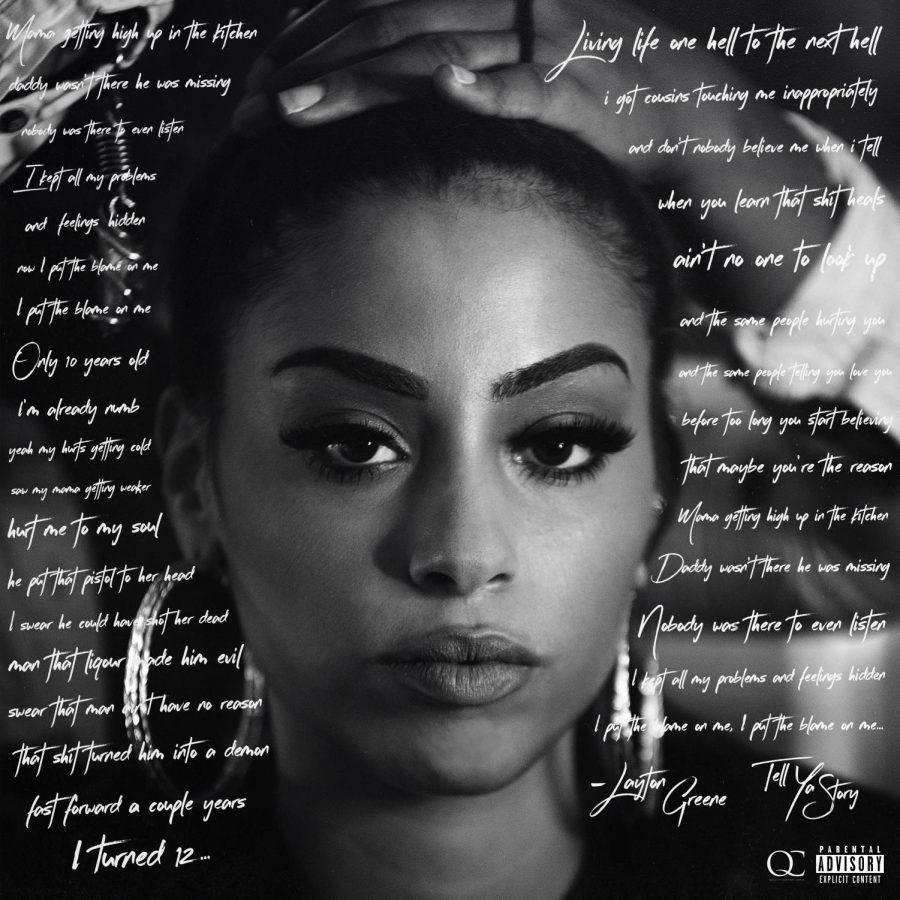 Layton Greene's new EP, Tell Ya Story dropped late September and been a mainstay at the Billboard's top R&B charts.

Tell Ya Story. Three words, two different worlds connected, and one powerful EP from an artist who was never expected to make it mainstream. It’s a simple, telling title that seems perfectly fitting for rising R&B star Layton Greene, as she expresses her life and struggles through her music as her journey into the music industry was quite an unusual one.

Hailing from East St. Louis, Illinois, Greene grew up in a turbulent household surrounded by drugs and abuse and even found herself homeless at times. Her talent in singing wasn’t a noticeable one either; she was both rejected by major talent shows like X-Factor and America’s Got Talent before garnering noticeable attention through the popular audio distribution platform, Soundcloud.

With this in mind, Tell Ya Story has evolved into a personal memoir for Greene, an outlet channeling the raw emotions and deep internal reflections about those times. She gets really personal in each song, addressing the various friends and family she’s known throughout the years both good and bad. It was those people that Tell Ya Story is partly inspired by and devoted to and the first song of the EP “Blame on Me” is a sure testament to that.

Pertaining to her childhood and early life, Greene is very literal and blunt with her lyrics. Describing deeply personal struggles such as being sexually harassed by her cousins or being left by her own mother for another man, there is nothing metaphoric that could be found in her words — everything is blatantly real and, in a way, “Blame on Me” sets the tone for how the rest of the six songs play out.

There is a recurring theme of Greene singing out her thoughts and doubts regarding love and life, almost as if she’s thinking aloud what could’ve been or what once was. In fact, it seems as Greene wants her music to focus more on herself, as she decided not to feature any other artists in any of her songs, a bold move for any artist on the come up. The interconnection between all the songs is perhaps the best part of the EP itself, and stark contrasts between two adjacent songs “Never Know” and “I Love You” was particularly enjoyable.

“Never Know” describes love at its height while “I Love You” is essentially a love letter to an old flame. Both songs provide great mood changes that send one on an emotional rollercoaster. It is if both songs equate to a personal interview with her, as listeners can understand what she is going through. One can feel her anguish from moving on an old flame or trying to understand why her past relationships didn’t work.

It’s a classic R&B theme many artists write about in their songs, but she makes her struggles a lot more personal, something a lot of her listeners can relate to. Greene’s first EP is true R&B. Her confidence to be true to herself with her lyrics is simply inspiring, and her willingness to be seen as vulnerable as she puts her heart out within each song can be nothing more than respected.

The only fault within the EP is that oftentimes the sounds and effects used in each song have this collectively similar vibe to them overall, making the EP redundant at times. However, it is almost expected from an up and coming artist like Greene, who is still finding her voice and identity as an artist. Tell Ya Story symbolizes her moving on from her past and move forward in better things like her music career.

So far, Tell Ya Story is currently number one in R&B albums on the Billboard music charts and for an EP, it’s quite an impressive feat and a sign of how good Greene is and how much better she can be. The sky’s the limit for Layton Greene and, before you know it, her name will eventually become a household name in the R&B world.