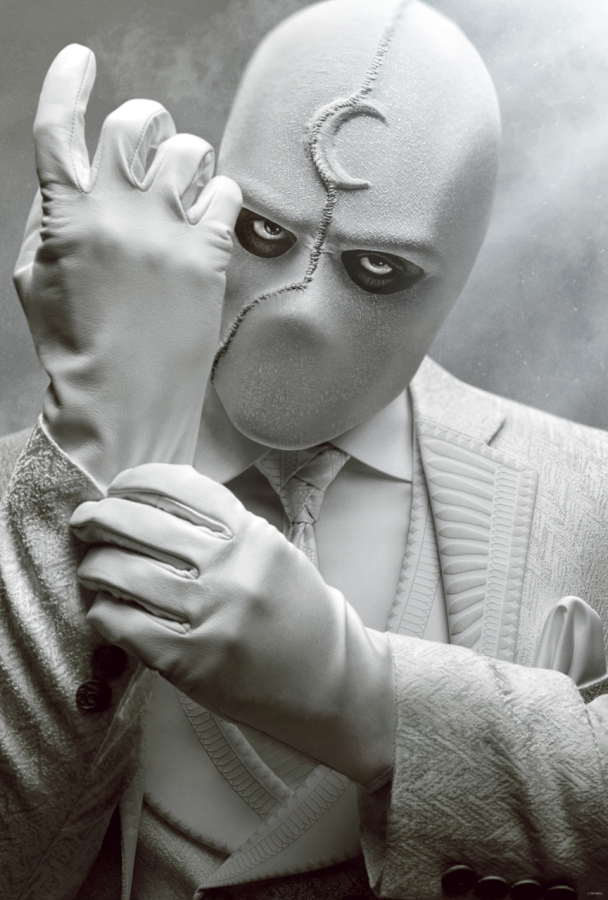 Steven Grant suited up in his version of the Moon Knight.

As the Marvel we once knew evolves, Phase 4 gives us another limited tv-series for eager Marvel fans. Moon Knight’s first episode follows Steven Grant as he suffers from blackouts that are caused by flashes of missing remnants from another life. After discovering the mental disorder he has, his life changing journey begins as Egyptian Gods enter the picture. Steven’s other persona is known as Moon Knight, a type of avatar for the Egyptian God of the Moon, Konshu.

Oscar Isaac joins the MCU and perfectly portrays a man who struggles with his identity. The main character grapples with dissociative identity disorder (DID), a mental disorder in which a person inhabits two or more distinct personalities. The two characters of Marc Spector and Steven Grant are trapped inside the same body as they both fight for control.

Many Marvel fans who started off with the comic books believe that Moon Knight is criminally underrated. Junior Meri Hakobyan feels that “MoonKnight was never really talked about before so I’m glad the show will give the character some representation.” With Phase Four being filled with big blockbuster movies like Spider-man: No Way Home and an expected release of Doctor Strange: The Multiverse of Madness, Moon Knight is a fresh face many are excited to see. Hakobyan says she “wasn’t sure what to expect” but was beyond thrilled with how the episodes unvelied. “It was exciting to see how the plot unfolds. I also loved the costume design and soundtrack. The music was on point for Arabic culture.”

Marvel’s Phase Four has been delving into more diverse stories with the release of Shang-Chi and several characters from Eternals. MoonKnight now brings Egyptian culture to life as the main character works in an Egyptian history museum. In the very first episode, past atrocities of different cultures were mentioned, like with the Holocaust and the Armenian Genocide.

With Marc and Steven constantly bantering with each other, an internal conflict is created between Marc and Steven because they are living different lives. One is the living embodiment of Konshu, and therefore the Moon Knight, while the other is just a confused man whose life is being ripped away from him day by day. Going down to the roots, Marc and Steven’s origin provide a mind blowing experience for viewers. Marvel, once again, branches into diversity with MoonKnight’s inclusive culture. With representation for Egyptian beliefs while also displaying dissociative identity disorder from a first-hand view, viewers were hooked in and ready for the weekly midnight episode drops.