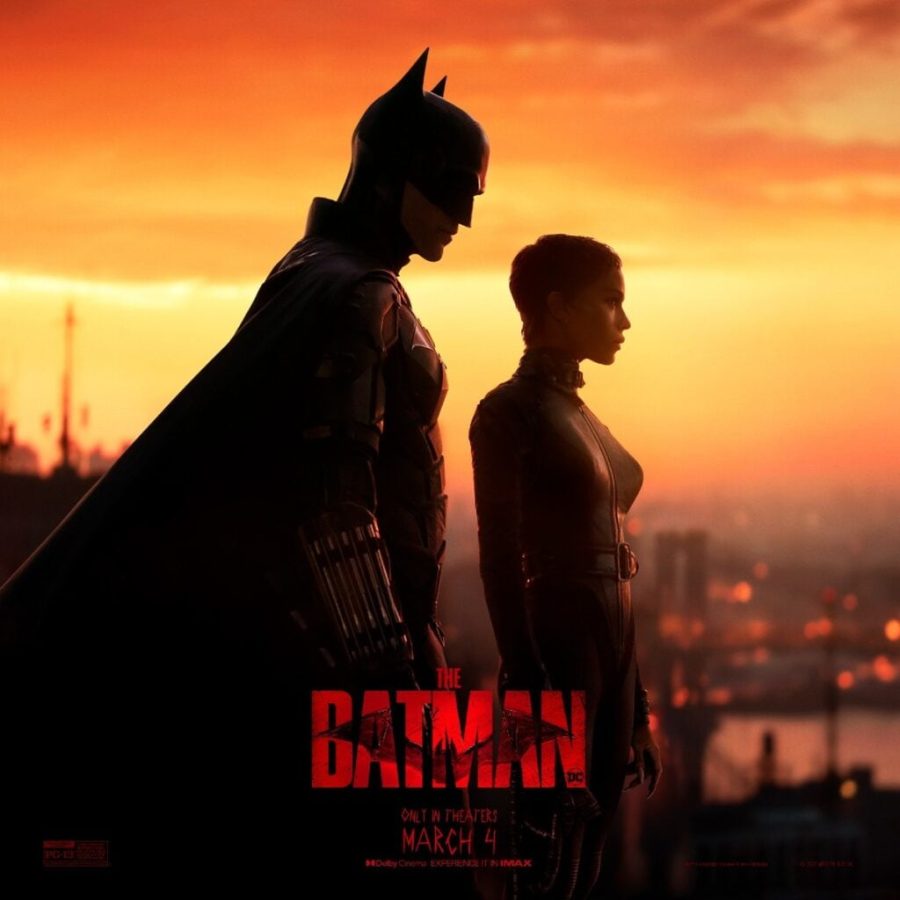 On March 4, 2022, Matt Reeves’ The Batman emerged seamlessly from the shadows onto the big screen. Boasting a star studded cast and renowned Michael Giacchino as its composer, The Batman whispered to fans and newcomers alike that this is a Gotham that has never been explored – and a Bruce Wayne who truly carries the mantle of Batman, not just shoulders it.

The first thing that Reeves does is establish the atmosphere and aesthetic of Gotham and the film as a whole. Gotham is not any American metropolis: it is a city drowning in

poverty and corruption – a place where citizens wade through rain and fog. Water slicked gargoyles leer down onto crumbling infrastructure while politicians seamlessly slink back and forth between criminal dens and bureaucratic offices. When Bruce murmurs to the audience, quiet but seething, on how filthy and damaged Gotham is, they believe him. His commentary is almost unnecessary; Reeves shows, through blackened Gothic architecture and harsh LED shop lights, exactly how much the city is suffering.

This oppressive atmosphere melds perfectly with The Batman’s writing and main storyline. Main story beats aside, Matt Reeves and Peter Craig (with the help of Mattson Tomlin) created a script that tackle aspects of Batman that most films never dared to confront – and in the process, intertwine Bruce Wayne thoroughly with Batman and the cowl’s representation of hope and justice. Bruce Wayne is a mess – in the best way possible. No longer a suave playboy who is immaculately presented, the Wayne heir of The Batman is pallid: with dark circles ringing his eyes and the demeanour of a wet kitten. Essentially, he’s transformed from a power fantasy of strength and charisma to a byronic, haunted pariah. Furthermore, the dichotomy between Bruce’s staunch confidence in the suit and his shaky anxiety as the Wayne heir cements how much the cowl really is his true self. Batman media often quips that “Bruce Wayne” is the persona, and “Batman” is the true self. However, it’s difficult to imagine this when the titular character exhibits no difficulty in shifting from persona to persona.

And all of this angst somehow works. Too often, Batman movies waste no time in establishing Bruce Wayne as hyper-talented and already cemented in his ideals of justice. The Batman is different. Although this iteration has operated in the suit for two years, he is missing a key part of the mantle’s philosophy. When the bat-signal is lit, everyone is stricken with fear– not just criminals. Civilians back away when they see Batman. He is not a symbol of justice, or of hope – but by the end of the film, this changes. Batman leads scores of people out of danger with a flare, acting as a literal torch to lead people to light and safety. He rescues those who are trapped under rubble, and lifts the wounded onto stretchers. One of the final scenes is of an injured girl clutching to Batman– she doesn’t want him to leave. This cements everything that Batman is supposed to be: a place of safety. The cowl does not represent revenge or bloody, misapplied justice. In doing away with past iterations of Batman,The Batman leaves Bruce room to mess up, to experiment, and to discover. He is thoroughly human.

Aiding the themes of The Batman is its camera language. Throughout the film, there is a growing sense of dread – A creeping anxiety, heightened by a crawling camera, or sometimes, a completely stationary one. This visual vocabulary follows a “less is more” rule: by withholding information, the audience is forced to imagine what is just out of frame. What hides beyond the corner? A gleaming knife, or a bloody arm? A threat? Or safety? There are few cheap thrills in The Batman; Instead, Reeves opts for a subtle terror. The opening sequence is a noteworthy example of this – it’s a voyeuristic experiment on the quiet horror of being watched; the fear of secrets being exposed. These deliberate choices in film-making reveal the central themes of hidden corruption and public lies.

Some last notes: Michael Giacchino is a genius. He understands, intimately, the importance of atmosphere. Investigation sequences are underscored with off-putting percussion akin to dripping water, and Catwoman’s acrobatics are accompanied by sensuous violins. Furthermore, leitmotifs, both vocal and orchestral, pavlov the audience effectively. Throughout the film, Giacchino trains watchers to associate certain musical queues and sounds with emotions and characters. The final product is chilling and effective.

Ultimately, The Batman transformed the cinematic image of a superhero into something closer to the source material (whatever comics constitute as a source material, anyway.) Reeves has given audiences a solemn and sincere Batman, and a movie drenched in noir influences that encapsulate what a modern caped crusader should be.