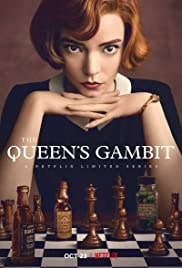 Never before would people have thought that they would be so captivated by a show about a bunch of characters playing chess, but there’s a first for everything.

Netflix’s adaptation of The Queen’s Gambit exceeds expectations as viewers are drawn into the show’s chess-filled reality. The period drama is nothing short of satisfying and visually appealing. The show follows the main protagonist, Beth Harmon, in her “coming of age” story of gaining success in a male-dominated world. It proceeds throughout her entire life up to the present moment in the first scene, showing her journey of becoming a chess pro.

The show also has a great representation of addiction. It doesn’t romanticize drug addictions at all, compared to many other shows trying to make it an “aesthetic” when it’s something people really have to go through. It shows that recovery (from any sort of illness or addiction) is not always a straight line. There are ups and downs that go with recovery as well, even as there will be people who are there for you.

You don’t have to care about or even be good at chess to be able to enjoy The Queen’s Gambit because the storyline and the showcase of the chess matches are worth the watch.

Anya Taylor-Joy, who plays the role of Beth Harmon, delivers an amazing performance of the character. Taylor-Joy accurately shows Harmon’s disconnection from society, although seemingly sad, as an advantage in the world of competitive chess. Her being a woman doesn’t faze her at all at her majorly male counterparts.

The show’s sets, clothing and artistic elements provide a luxurious feel, a feast for the eyes, might I say. These types of elements are definitely a part of the reason why the show is as enjoyable as it is. It is beautifully made, especially with the cinematography making you feel like you are a part of Beth’s journey throughout the show.

Unfortunately, Netflix won’t be continuing “The Queen’s Gambit,” due to it being a limited series, much to the dismay of viewers everywhere, myself included, who wanted to know the rest of Beth’s story and what happens next after her big win in Russia.

However, the show’s ending is the perfect stop for Beth’s story. She goes through so much in her life, only being in her late 20s at the end of the series. It is a sweet ending, bringing everything full circle from the first scene.