Are you part of the ‘Elite’? 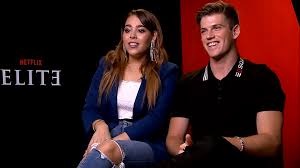 Miguel Bernardeau (Guzmán) and Danna Paola (Lucrecia) being interviewed for the new season.

Elite, a Spanish television series created by Carlos Montero and Darío Madrona, premiered its second season on Sept. 6 on Netflix. Almost a year after the show first premiered on Netflix, the second season exposes old secrets and gives viewers a new mystery to solve, adding more mystery and thrill to the season.

School begins for the students after a summer of grieving Marina Nunier’s death. Her boyfriend who was framed for the murder, Nano, is living behind bars. Samuel, Nano’s younger brother, tries to do everything to obtain the bail money and prove his brother’s innocence. Most of the other students, including Guzmán (Marina’s brother) are angry with Samuel because of what his brother did. Along with the new season, came a new character, Rebeca, who seems to have taken an interest in Samuel, but Samuel suspects something suspicious with her family as he sees her mom printing lots of money.

After the Season 1 finale, viewers learned that Polo murdered Marina because she possessed his girlfriend’s watch. Polo begins to have anxiety attacks and is seen taking pills while he suffers with hiding the truth. Samuel begins to suspect Carla (Polo’s ex-girlfriend) as the murderer, because Carla’s family caused harm to Christian (Samuel’s best friend) who was hit by a car after finding out what Polo had done. So, Samuel gets closer to Carla in order to find out what really happened, but as viewers will learn, Samuel has disappeared.

As the season progresses, there are scenes of the police investigator interrogating each student on Samuel’s disappearance. Viewers continue to try to solve whether he ran away, was kidnapped, or killed. The first episode is named “20 hours missing,” and the hours increase each episode as Samuel’s disappearance continues.

All the actors, especially Miguel Bernardeau who plays Guzmán, display the emotions of their character through their acting. Bernardeau is able to portray the anger and sadness he feels through his sudden bursts of violence towards Samuel and his other friends. Moreover, other characters continue to portray the dark side of the show through the intense conversations and sudden bursts of rage.

Some might say that Elite is the Spanish version of Riverdale, since they’re both a murder mystery. Elite’s plot captures the viewers’ attention as each episode ends in suspense. The music and setting also set a gloomy mood to the series. For example, Rebeca and her family move into the Nuniers’ old house. When Rebeca throws a Halloween party, everyone feels weird going back  to her house, especially Guzmán and Polo. Furthermore, during each sad moment, music is played to emphasize the characters’ feelings and to appeal to the audience’s emotions.

Since Elite is a Spanish web television series, the characters all speak in Spanish. If you are not fluent in the language, you must either change the mode to English where different characters recorded voice overs for each character, or you can turn on the English subtitles. The only problem that many people face when they turn on the subtitles is that at some moments you have to read them very fast because the characters begin to talk too fast for some viewers to keep up. This especially becomes a problem when there is an argument among the characters.

The mystery of Samuel’s disappearance continues as more secrets continue to rise. Viewers will see whether Polo and Carla will confess what really happened with Marina and secrets will continue to be exposed.