‘Avengers: Endgame’ brings the end of an era 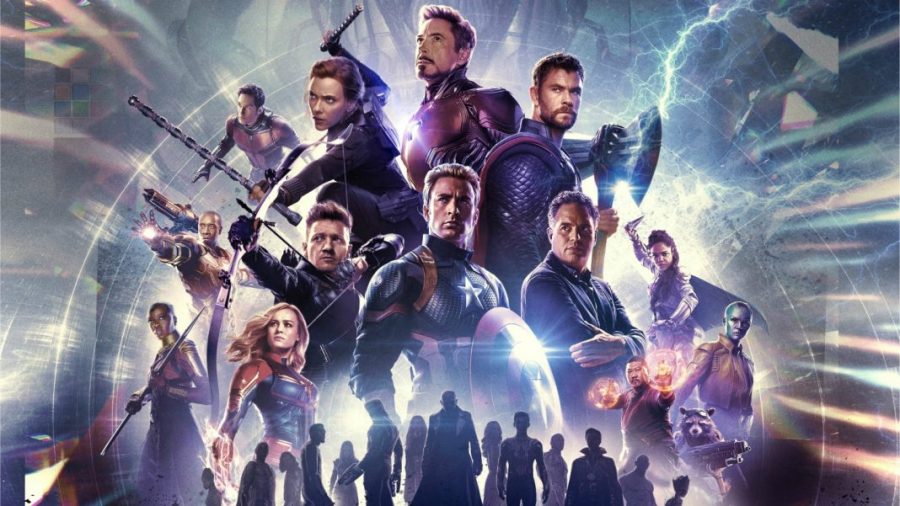 The heroes that survived the Decimation will have to work together and finish the job of fighting Thanos while working to reverse the damage caused at the end of Avengers: Infinity War.

For 11 years, spanning 22 films, Marvel has been building and developing a universe full of characters based off their comics to boil down to one last stand. Primarily focusing on the original six Avengers, the film opens with the world still being affected by the events of Avengers: Infinity War.

Tony (Robert Downey jr.) is stranded in space with Nebula (Karen Gillan) without any hope of rescue, while the remaining Avengers on Earth are still mourning the lives lost. Hope is restored to the two stuck on the Benatar when Carol Danvers (Brie Larson) appears and helps them return to Earth. They are greeted by the team members that survived the Decimation before; Steve (Chris Evans) pushes him too far and they have an argument further driving a wedge between them.

Primarily set five years after the events of Infinity War, this film features a world that has fallen into a desolate waste with half the population of all living things snapped away. The Avengers are trying to figure out a way to stop Thanos (Josh Brolin) and bring back their friends, when a familiar face appears, Scott Lang (Paul Rudd).

He gives the team crucial information about the concept of time working differently in the Quantum Realm. While five years had passed in the normal world, for him, only five hours passed, and he wants to pull off a time heist to stop Thanos. With the new information acquired, they group goes to talk with Tony and Bruce (Mark Ruffalo) to discuss the possibilities of what could happen.

With the Avengers regrouped, they target the six Infinity Stones from their past when Natasha (Scarlett Johansson) realizes that with the right year selected, three of the six Infinity Stones are in New York at once: the Time Stone, Space Stone, and Mind Stone. The Reality Stone is still on Asgard and the Power and Soul Stones are still on their planets Morag and Vormir.

The team splits with Steve and Tony leading a group back to New York in 2012, Thor (Chris Hemsworth) goes back to Asgard to recover the Reality Stone, and Nat and Clint (Jeremy Renner) head to Morag and Vormir. Once each team reaches their destination they split up to cover more ground and find the Infinity Stones.

Upon returning to the present, the team reconstructs their own version of the Infinity Gauntlet to undo the damage caused by Thanos. After the brief moment of peace realizing they were successful, they encounter another problem, the Thanos from a past reality followed them to their own with the goal to destroy the Avengers.

The Avengers head to make one last stand against Thanos and his army of the Chitauri, outriders, and Black Order. Easily outnumbered by thousands, the Avengers know they have no hope to win, until those who had been erased by the Decimation reunite with them at the Avengers Compound with help from Stephen Strange (Benedict Cumberbatch).

Avengers: Endgame is well shot concerning the original team, and not putting too much focus on the newer characters (as most of them were dusted) that survived the snap. Each of the original six characters had a sequence during the final stand solely dedicated to them and the work they put forth for the franchise. The shots ended up working as a tribute to the character and actor.

Marvel keeps to its habit of weaving humor throughout their films no matter the severity of the issue facing the heroes. Humor in a Marvel isn’t only dialogue based, either. There are the subtle glances and actions between characters that can spark a laugh. In one shot, there’s a look of slight incredulity when Clint sees Rocket, a raccoon, voiced by Bradley Cooper, carrying a gun around and wearing normal clothes, and the way he looks at Rocket, is with skepticism.

Another attribute of Marvel are their allusions to possible upcoming films, but in the case of Avengers: Endgame, there’s familiarity from the past. Integrated throughout the film are the extremely familiar shots from previous films. The elevator fight scene from Captain America: The Winter Soldier, the Battle of New York from The Avengers, and Peter Quill (Chris Pratt) stealing the Power Stone from Guardians of the Galaxy. Despite these iconic shots being used in prior films, they had to be reshot at a different angle, with a different result compared to the shot used in the original film.

In this film, Marvel continues to make iconic lines and incredible moments appear on screen with their characters and the utilization of their powers. When the characters erased in the Decimation return to make their final stand beside Steve at the compound, there’s never going to be a shot to match the capacity or scale of the final fight. There will never be a scene with as much power to women as the scene with all the females converging to protect Danvers.

With parallel realities entangling in the present and time travel being a key factor to the Avengers success, characters that were killed in prior films also make an appearance. It’s a mix of nostalgia to see the few characters Marvel brought back to show their significance during the time heist and what they were doing while a other events happened in the world around them.

The film is a perfect tie to end the series with the original Avengers while presenting new problems for the next generation of heroes to face. Unlike other Marvel films, this one does not include an end credit scene, but just a sound to remind fans of who started it all. There’s no allusion to any new characters to be introduced in the next phase or any hints to the plots of movies continuing the stories of existing heroes. Avengers: Endgame really is one last fight with the original Avengers all on screen together, to end an era.