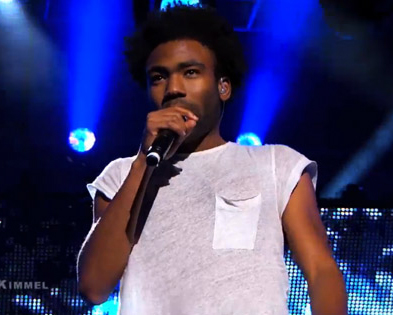 Donald Glover sings his heart out in concert.

Donald Glover’s music video for his new song, “This is America,” leaves viewers with a lot to think about. Glover starts the video the textbook way, a man sitting in a chair, playing a guitar with Glover staring off into the distance and dancing to the intro of his song. As the camera pans in on Glover, we see his body twist and turn to the upbeat music as he approaches the chair where the guitarist has been replaced with what looks like a hostage with a bagged head. Glover pulls out a gun, shoots the victim, turns to the camera and raps, “This is America.”

Throughout the music video, we see Glover smile as he dances his way through his crimes, shooting people as guns are thrown to him from offscreen. Dancers and school children distract the audience from the backgrounds of people being killed and commiting suicide.

This commentary on how Americans are blind to what is really happening is also shown in the lyrics when Glover sings, “Look at how I’m livin’ now. Police be trippin’ now. Yeah, this is

As he dances with his band of smiling school children, he brags about his achievements and his looks, making fun of today’s SoundCloud rappers who “brag rap” and flex on whatever they have.

He ends the video in the dark as he runs with terror in his eyes from the policemen and people chasing him.

Glover’s commentary on today’s society along with his flawless cinematography make his music video stand out. While most of today’s rappers jump around and throw money in the air, Glover brings up a hard subject that appeals not only to teens but to adults as well.