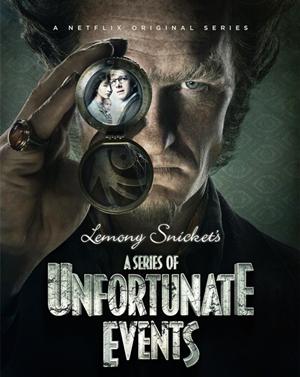 Neil Patrick Harris as Count Olaf on the promotional poster for the show.

“I would advise all our viewers to turn away immediately and watch something more pleasant instead,” said Lemony Snicket, the narrator and author of the famous children books: A Series of Unfortunate Events. This was the introduction to Netflix’s new original series based on Snicket’s novels, which debuted Jan. 13 and has captured audiences of all ages, especially those who have grown up reading about the Baudelaire children and the greedy and haughty Count Olaf.

The adaption contains eight, 45-minute episodes. Season 1 covers four of the 13 novels, leaving fans eager for more. The graphics are quite picturesque, though the majority of the show has dark and uncanny scenery compiled with equally eerie music. The language and plot are inviting to both children and adults.

This Netflix series puts prior adaptations to shame. The 2004 movie starring Jim Carrey was a complete flop. It strayed away from the books completely and failed to take off at the box office.

So it is understandable that some viewers were anxious and reluctant to see the Netflix renewal due to fears of another poorly made adaptation that directors based loosely on the books. Snicket, whose real name is Daniel Handler, also helped in writing the script for the show. The dialogue is humorous, witty and absolutely impeccable. A prominent theme of the show is the inability for adults and organizations to protect the Baudelaires. It sprouts questions about morals, maturity and intuition as the tale unfolds.

Undoubtedly, the show captures the dismal essence seen in the books, while projecting it on screen in a refreshing light. With subtle parallels to today’s most pronounced issues in society it truly is a model for other TV programs to follow.

For those unfamiliar with the plot, the tale of the Baudelaire children follow Violet, the eldest and most innovative; Klaus, the booksmart middle child; and Sunny, the infant who has a knack for putting her teeth to extreme use. The children lose their parents in a fatal fire, and go through numerous guardians to escape their distant relative Count Olaf, who wants the sizeable fortune left to the kids.

A good show needs good acting. Neil Patrick Harris proves himself as the perfect actor to capture Count Olaf’s raw and unsettling character. Harris, whom I’ve admired since his role as Barney in How I Met Your Mother, amazes with his ability to tackle such a unique character. Alongside Harris, Malina Weissman as Violet, Louis Hynes as Klaus, and Presley Smith as Sunny all carry out great performances.

Though the series might not completely be the same as the books, it still delivers. People who have not read the books would still enjoy the program greatly. Executive producer Barry Sonnenfeld has said, “The second season is laid out to be 10 episodes for the next five books and the third season would be the rest of it.”

This Netflix adaptation revives the book series from a series of unfortunate and disappointing attempts to bring it to the screen. Many, including myself, are delighted by this new production and now impatiently await for Season 2.