‘Insurgent’ can’t get anything right 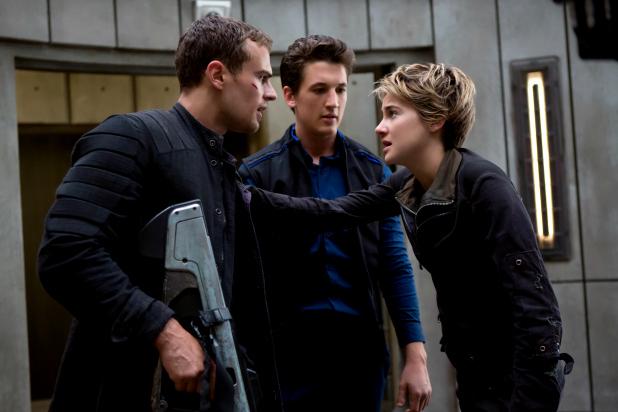 Last year’s Divergent, based on the first novel Veronica Roth’s YA trilogy, was a complete and utter failure on every possible level. Not only did it waste a tremendously talented cast, but its source material was painfully derivative of other works with similar concepts. It’s about a dystopian future that has been divided into specific sectors by an evil government that must be taken down by one special girl who has the capability of restoring balance to the world. It can’t get any more unoriginal and rote than that. Unsurprisingly, its successor (using the term “success” very lightly) Insurgent makes all the same mistakes and commits to even more problematic choices.

Being mechanically churned into theaters just a year after its predecessor, the story picks up about a week or so after the events of the first installment as the tale’s heroine Tris (Shailene Woodley), along with her stoic boyfriend Four (Theo James), anxious brother Caleb (Ansel Elgort) and fellow fugitive Peter (Miles Teller) are being hunted by the malevolent Jeanine (Kate Winslet), who urges to unlock the contents of a box that, she believes, will reinstate prime human civilization. With Tris being the only Divergent who retains attributes from all five factions, therefore being the only one capable of revealing the secrets Jeanine desires, yet realizing the dangers these revelations may hold, she’s put at odds with herself and the world around her as she must take down the forces that threaten her and her allies.

Getting what little positives there are out of the way first, Miles Teller, as squandered as he is, gives as much life as he can to this dull, lifeless movie. He breezes by through every scene with a refreshing sense of carelessness and fun, almost mocking the film’s cringeworthy self-serious tone. Of all the cast who are, once again, given nothing to work with, he’s the only one who attempts to conjure any kind of pleasure while everyone else just aimlessly broods around, especially Woodley.

This is one of the best actresses working today who, even in a mediocre movie, typically always turns out with a good performance (i.e. Divergent). But here, she gives perhaps her first instance of poor acting. A particular scene is that of a court hearing in which she’s under a chemical influence that is just completely overdone by Woodley’s treatment.

But the cast is the least of the movie’s problems. As a story, absolutely nothing makes sense, especially the world the characters live in. Its portrait of a society is thoroughly unconvincing and fails to provide any context as to how it was developed and why, both in the first and second movie.

At a certain age, these citizens are given a test that determines which faction they pertain to: Dauntless (the brave), Amity (the peaceful), Erudite (the intelligent), Abnegation (the selfless) and Candor (the honest). However, the process of being initiated into these factions is completely contradictory to what the whole point of the movie is, as people can pick whatever faction they want regardless of their test results.

This aspect completely diminishes any sort of tension or uniqueness the story could have, as this makes literally everyone in this world as “Divergent” as the heroine. What makes her a Divergent is her capability to think and act differently in comparison to what her society tells her, but as can everyone else, which just ruins the story’s main concept. And when the concept can’t be bought, then there’s nothing left to add substance.

Sure, there are some action scenes sprinkled here and there, but they’re all either overly polished/choreographed or riddled with truly atrocious special effects. The finale in particular is just a nonsensical, blandly stylized, headache-inducing mess, not only as an action set piece, but as a narrative conclusion.

Now, it’s evident that these films are more than just generic sci-fi adventures (or at least that’s what they think they are), they’re social allegories. But the problem is, they never have anything new or riveting to say that other works haven’t already said. Using this fictional dystopia as a base, the story comments upon the distribution of power in modern society and the political/social divisions that come with that. Though it poorly delivers that message, it still tries, which means it wants the audience to pay attention to its deeper meanings as well as its action spectacle.

This film is a metaphor, a clunky metaphor, but a metaphor nonetheless, so one would expect that once its made its point, then the saga itself will come to an end. This is not the case. By the end of this movie, the metaphor is stated, everything that was wanted to be said is said and that’s the end of this story, right?

On the contrary, even with its point made, it still, for some reason, decides to unnecessarily and awkwardly resume. It doesn’t even end on a cliffhanger; it just sort of ends, yet leaves the audience with the two more inevitable movies that will continue to explore this ridiculously stupid world. By doing that, it has entirely dismantled any kind of smart commentary it thought it had. By choosing its dumb action/adventure route over its equally dumb, yet well-intentioned allegorical route, it exemplifies just how horribly it handles its ideas.

Insurgent wants to be a gritty action movie, yet doesn’t have the rough filming style or choreography to stage any tense sequences. It wants to be a sharp social commentary, yet never fully commits to staking its claim as an allegory. This is just another generic, run-of-the-mill YA adaptation mess with an ending that somehow manages to leave the audience, those who haven’t read the books obviously, not knowing what to expect, which would be fine its story didn’t feel conclusive, but it does.

By the end, all this movie does is leave a really unpleasant mark.